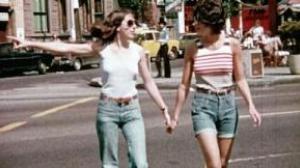 The following notes on Arthur Bressan, Jr.'s Gay U.S.A. (1977) were written by Matt St. John, PhD Candidate in UW-Madison’s Department of Communication Arts. A restoration of Gay U.S.A. from the UCLA Film & Television Archive will be shown on Saturday, February 15 at 8:15 p.m. in our UCLA Festival of Preservation on Tour series. Gay U.S.A. will be preceded by Christopher Munch's hour-long The Hours and Times at 7 p.m. Both screenings are free and will take place at 4070 Vilas Hall, 821 University Avenue.

Director Arthur J. Bressan, Jr. is best known for his 1985 AIDS drama Buddies, which his sister Roe Bressan presented at the Cinematheque in November 2018, but his films touch on many aspects of gay life in the 1970s and 1980s. In his earlier work, Bressan had already documented pride parades like those seen in 1977’s Gay U.S.A. His first film, the documentary short Coming Out, centers on the first annual San Francisco pride march in 1972. He also made numerous gay adult films, recognized for their formal qualities as well as their fusion of romantic narrative and pornography. For instance, Passing Strangers (1974) structures its story of a gay couple in two sections differentiated by black-and-white and color cinematography, with the shift to color occurring at the men’s first physical interaction. Gay U.S.A. lacks the hardcore content of Bressan’s films like Passing Strangers and Forbidden Letters (1976), but it maintains an attention to physical contact, frequently showing gay couples passionately kissing or casually holding each other in public spaces, as it documents pride marches around the country.

Huge crowds, elaborate floats, and ornate costumes reveal the immense enthusiasm for pride events in Gay U.S.A., but the film’s opening titles are a solemn dedication to Robert Hillsborough, a San Francisco man who was stabbed to death in a homophobic attack on June 22, 1977. Just four days later, Bressan and his collaborators captured their footage of pride parades happening across the United States, in cities including San Francisco, New York, Los Angeles, Chicago, and Philadelphia. The film records the crowds’ anger over recent high-profile events involving the gay community (the typical designation for the LGBTQ community at the time –– the film only briefly mentions bisexuality, and there is no discussion of trans people). Many of the participants discuss Anita Bryant’s homophobic campaign against Miami’s gay rights protections and violent incidents like Hillsborough’s murder, but the film also shows the marchers’ exhilaration over the massive public gatherings. Some of the pride attendees in the film are motivated by fighting anti-gay rhetoric as much as enjoying the energy and spectacle, and Bressan balances this joy and anger throughout the film.

While there is some observational footage, Gay U.S.A. primarily features interviews with people at the marches, as they discuss their thoughts on being gay, especially in relatively progressive large cities. The filmmakers also talk with straight people at the marches, with many showing support and a few just wanting to see what the fuss is about. Bressan compiles the interviews in a quickly paced series of topics, with various subjects providing a rough structure and sincere gay-themed folk songs often bookending the sections. These segments allow Bressan to recognize the numerous groups and perspectives represented at the events, instead of portraying the crowds as monolithic. Bressan knew that gay men already dominated most public acknowledgement of the LGBTQ community at this time, so he made a conscious effort to incorporate women throughout the film. Some sections focus on issues particularly related to women’s experiences, like questions of terminology for lesbians or the ratio of gender representation at pride marches. One sequence toward the end of the film includes interviews with multiple drag performers, intercut with women questioning the political vitality of drag. Most of the interviews are positive, as people discuss the opportunity to be gay in public at the marches and what it might mean for young people deciding whether they should come out, but Bressan leaves room to address the already forming factions and priorities within the community.

He also makes space for gay people to speak out against mainstream forces that they find oppressive, unjust, or simply annoying. Some of Gay U.S.A.’s most compelling moments see gay men and lesbians explaining the hypocrisy of a straight society that seeks to hide their affection and identity. One woman memorably castigates straight people who criticize the gay community for being “blatant,” as she offers a litany of ways in which “blatant heterosexuals are all over the place.” Bressan allows himself to express some rage of his own, in a striking portion of the film that recounts the persecution of homosexuals in Nazi Germany and the recent appropriation of the pink triangle, which had been used as a mark of shame.

By documenting the massive pride marches across the United States, Bressan aimed for the film to have political impact. He said, “My naive dream was that if we all saw ourselves in our numbers we would never buy into the guilt trip again.” The film did have substantial reach upon its release, even being used as an educational tool in some contexts. It screened on local television in Wichita, Kansas, where gay rights activists hoped it might promote awareness and help them prevent legislation and campaigns like Anita Bryant’s in Florida. Bressan’s sister, Roe, has also recalled that the film was shown in schools, as an introduction to the reality of “gay life.”

Arthur J. Bressan, Jr. passed away in 1987, but Roe Bressan has worked to ensure her brother’s legacy in queer cinema. She has been a key figure in the preservation and continued distribution of his films, like the UCLA Film and Television Archive’s new restoration of Gay U.S.A. In a 2019 interview with Filmmaker Magazine, Roe described what her brother might hope for new audiences to take away from Gay U.S.A.: “He would want people to simultaneously remember where the fight started, but take the fight and continue moving it forward. He believed in young people. I think that he would want younger people to invest in knowing what happened before in order to prevent it from happening again, despite how far we’ve come.”

<<A BOY AND HIS DOG: We Don't Need Another Hero
An Intimate Slice of Beatlemania: THE HOURS AND TIMES>>