An Intimate Slice of Beatlemania: THE HOURS AND TIMES 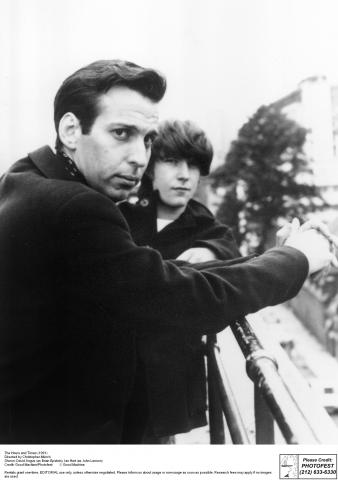 THE HOURS AND TIMES

The following notes on Christ Munch's The Hours and Times (1992) were written by Leah Steuer, PhD Candidate in UW-Madison’s Department of Communication Arts. A restored 35mm print of The Hours and Times from the UCLA Film & Television Archive will screen in our UCLA Festival of Preservation on Tour series on Saturday, February 15 at 7 p.m., followed by Gay U.S.A. at 8:15 p.m. Both screenings will be held in our regular Cinematheque venue at 4070 Vilas Hall. Free admission!

There’s nothing fast, euphoric, dirty, or sweet about Christopher Munch’s The Hours and Times. Made on an astonishingly low budget and clocking in at just under an hour, it’s a quiet and contemplative little indie feature that barely belongs to the motley collection of films made about The Beatles over the past six decades; indeed, what makes The Hours and Times so remarkable is that it shares so little DNA with its larger-than-life references. Staged sparsely, as a series of black-and-white vignettes, Munch’s film quietly speculates on what might have happened during John Lennon (Ian Hart) and Beatles manager Brian Epstein’s (David Angus) 1963 holiday to Spain - a real event which took place right between the band’s transition from fleeting pop sensation to international stardom, between the spark and the flame. It’s a brave portrait of homosocial intimacy fractured by pride, fame, and trauma; many contemporary reviews described Hours as a challenging meditation on “friendship,” though the word barely encapsulates Lennon and Epstein’s sexually charged cat-and-mouse connection.

Though the film clearly takes creative liberties with history and with its two central characters, it doesn’t really have to stretch far to queer this corner of the Beatles narrative. Indeed, shortly before his death in 1980, Lennon told Playboy that “it was almost a love affair [between me and Brian], but not quite. It was never consummated. But we did have a pretty intense relationship.” Rumors around the nature of their closeness persisted through the height of The Beatles’ fame and for years after, between interviews and biographies. Though Epstein achieved monumental success with his diamonds-in-the-rough from Liverpool, he struggled with reconciling his gay identity and public image and died tragically from a drug overdose at age 32. Both he and Lennon were gifted, highly damaged men with rivaling appetites for self-destruction; in this film, Munch expertly weaves what is known, unknown, and imagined about them into a portrait of queer longing that is in no way exploitative. Though the two men often find their way into flirtation - and sometimes overt eroticism, as with the sequence in the hotel bath - Hours sidesteps the sensationalism of it all to create something small, painful, and special.

Side characters step in and out of the Lennon/Epstein bubble, supplying temptations, distractions, and moments of clarity as the men reckon with their complex entanglement over a short series of days. We always return, however, to the anchoring, shy incandescence of Hart and Angus at the center of it all. Epstein’s sad desperation for human touch becomes clear during his brief encounter with a young bellhop; the dashing but closeted guest Quinones proves a handy pawn for he and Lennon to test one another’s “type.”

Unsurprisingly, it’s the women closest to the two that provide the most fascinating and useful insights into these characters. There is a particularly affecting contrast between their phone conversations: Epstein is meek and tender with his mother, while Lennon is studiedly detached while checking in with his new wife Cynthia. Blandly hot flight attendant Marianne represents the kind of easy sin available to an artist like Lennon, who seems to yearn for something deeper and more dangerous with Epstein while also firmly keeping him at arm’s length (“I get the feeling I'm supposed to bring it up and then I’m damned for doing so,” observes Epstein). Angus delivers lines like these beautifully, with a grave sense of resignation; surprisingly, Hours was one of only a handful of Angus' film appearances. Hart is excellent as a young Lennon, dry and impish and electric. In fact, he proved himself so well in this role that he would go on to play a slightly meaner but equally queer-leaning Lennon again in Backbeat (1994).

The film is very much a curiosity, from its bold choice of subject to its depth of feeling in the face of an obviously humble budget. Hours won the Special Jury Recognition award at the 1992 Sundance Film Festival and compares quite favorably to Munch’s sparse oeuvre. The (unfortunately abysmal) Harry + Max, released in 2004, attempted to recreate this film’s tenuous magic but failed to approach the wit and the simple, aching, lovely sadness that pervades Hours.

As I noted at the outset, Hours is only glancingly touched by the powerful glow of Beatles mythology. But it is also, in a sense, part of an affective lineage: it has such pathos precisely because it is so vulnerable beneath the shadow of an enduring musical and social legacy. Compare Hours to the more classic biopic structure of Backbeat, set a few years earlier during the Beatles’ grungy beginnings as a touring band, or to the 2000 John/Paul portrait Two Of Us (which also features a kiss! Are we seeing a pattern here?). Nowhere Boy (2009) rewrote the story of four men in a fishbowl into a prequel, following lonely teenage boys joined by musical destiny. Still other filmmakers have interpreted The Beatles as lyrical poetics (Across the Universe), as a cultural touchstone (Yesterday), and as a fannish phenomenon (Living Is Easy With Eyes Closed, I Wanna Hold Your Hand). These disparate films are each, unto themselves, an effort to make sense of the emotions wrought by popular artistry and of the stories we tell ourselves about how fame is formed. Hours, standing apart and lonely, occupies itself with something else: just a few strange days in the mortal lives of icons struggling to feel.