An Upside Down Disaster: THE POSEIDON ADVENTURE 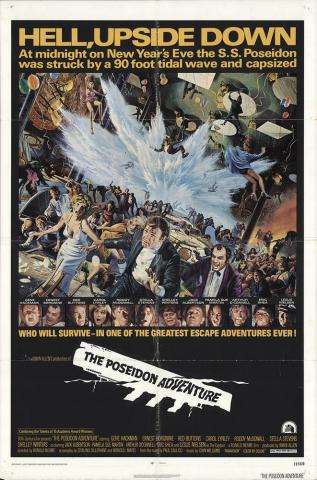 Often seen today as either objects of camp or receptacles of cultural anxieties, the disaster films of the 1970s proved hugely successful in offering audiences an experience that combined a bit of both. On the one hand, movies like Airport (1970), The Towering Inferno (1974), and Earthquake (1974) provided the perversely satisfying spectacle of watching a more-stars-than-there-are-in-the-heavens cast get slowly picked off as they collectively braved the films’ titular cataclysms. On the other hand, the post-disaster bands of survivors created social microcosms within which questions of morality, leadership, and social cohesion could get worked out in simplified but often gripping fashion. Critics might have expressed ambivalence about these works’ thin characterizations and often head-spinning mixtures of ruthlessness and sentimentality, but the sheer popularity of the genre’s early-to-mid 70s entries made them a staple throughout the decade.

The Poseidon Adventure (1972) remains one of the superlative disaster films of the era, combining all that is stirring, silly, and satisfying about the genre’s heyday. We meet a menagerie of characters aboard the titular sea craft, including an unorthodox reverend (Gene Hackman); a police officer (Ernest Borgnine) and his wife, a former prostitute (Stella Stevens); a melancholy, health-obsessed haberdasher (Red Buttons); and an elderly couple (Jack Albertson and Shelley Winters) traveling to Israel to meet their grandson for the first time. As the passengers gather in the grand ballroom to ring in the New Year, an undersea earthquake unleashes a massive tidal wave that overturns the ship. The ship’s purser (Byron Webster) insists that the survivors remain in the ballroom to await help, but Hackman’s tempestuous preacher rightly intuits that the crew has perished and that the only hope for survival is to escape the capsized vessel. The aforementioned passengers comprise the ragtag crew who follow the reverend, joined by a pair of young siblings (Pamela Sue Martin and Eric Shea), an injured waiter (Roddy McDowall), and the traumatized singer of the ship’s band (Carol Lynley).

Having grown up with the world-demolishing threats of such 1990s disaster films as Independence Day (1996) and Deep Impact (1998), I’m always struck by The Poseidon Adventure’s assiduously limited scope. Once the initial catastrophe has occurred, the ship becomes a shadowy maze where quite literally up is down. There’s an Alice in Wonderland-esque absurdity to some of the overturned mise-en-scene, as when one character enters a ship bathroom and looks up to find the toilets hanging from the ceiling. Formerly quotidian objects and structures are either transformed into death traps or reimagined as tools of survival. Most memorably, the ballroom’s stately Christmas tree crushes a number of passengers as it tumbles to the ground mid-capsizing, only to become a makeshift ladder to safety for the preacher and his cohort. Such scenes give The Poseidon Adventure a tactility that is sometimes missing from later, CGI-enhanced disaster films—the sense of desperate ingenuity with which the characters navigate a helter-skelter yet stubbornly concrete space.

Disaster films from the 1970s negotiate a constant tension between the bounty of acting talent present within their ensembles and the often-flimsy characters and eyebrow-raising situations they’re asked to play. The Poseidon Adventure navigates this as much as any of the era’s films. Newspaper advertisements conspicuously threaded the needle between prestige and sensationalism, touting “the talents of 15 Academy Award winners” amongst the film’s creative team while trumpeting with wild-eye hyperbole: “Who will survive—in one of the greatest escape adventures ever!” While no one would characterize the film’s dramatic arcs as Chekhovian, the cast nevertheless finds moral weight and pathos within the screenplay’s considerations of religious faith and collective responsibility. Winters stands as first amongst equals here, bringing humor and tenderness to her Mrs. Rosen, who (in simultaneously the film’s most affecting and parodied moment) stuns all with her bravery and prodigious lung capacity.

Winters received a 1973 Academy Award nomination for best supporting actress for her work in The Poseidon Adventure—one of nine nominations and two statuettes awarded to the film, presumably in recognition of both its quality and its massive popularity. (John Williams justifiably received one of those nominations for his stirring score; in a marker of the composer’s oft-underrated versatility, he received a second nod that same year for composing the music for Robert Altman’s psychological thriller Images (1972).) The Poseidon Adventure opened to much fanfare in December 1972. The film’s premiere doubled as the inaugural screening for the National Theater in New York, which was reported to be the first brand-new movie house to open in Times Square since 1935. Once in theaters, the film proved to be a box-office sensation. It ended its run at the domestic box-office with roughly $42,000,000 in rentals, financially besting such 70s-era touchstones as MASH  (1970), The Godfather: Part II (1974), and Young Frankenstein (1975). Critics, meanwhile, offered (often tempered) praise of The Poseidon Adventure’s technical achievements, standout performances, and masterful orchestration of suspense. As New York Times’ critic Vincent Canby noted, “You simply enjoy the engineering feats of the moviemakers, which are so effective that they touch even outrageous things with credibility.”

Attempts to replicate the success of The Poseidon Adventure have proven spotty. A 2005 television remake has been largely forgotten; while both the 1979 sequel, Beyond the Poseidon Adventure, and the 2006 theatrical remake, Poseidon, were received with relative indifference by critics and audiences. The fandom surrounding the original, on the other hand, has remained fiercely dedicated over the years. A New York Times report from 2006 noted that the official Poseidon Adventure Fan Club had roughly 2,000 members. One such super-fan, playwright David Cerda, even adapted the film for the stage. Poseidon! An Upside Down Musical has been performed throughout the United States—a testament, Cerda insists, to the film’s enduring combination of earnest uplift and spectacular excess. “This group of misfits is able to surmount such overwhelming odds,” he told The New York Times. “‘Plus, he added, ‘it’s big and splashy.’”