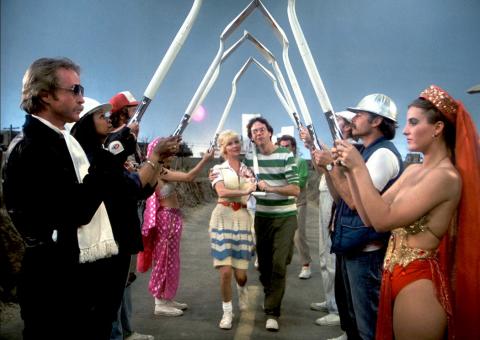 This essay on Neil Young's Human Highway was written by WUD Film's Vincent Mollica. A restored DCP of Human Highway, supervised and recut by Neil Young, will screen as our latest Marquee Monday selection on Monday, April 17 at 7 p.m. in the Marquee Theater at Union South. The screening is co-presented by WUD Film.

For everyone starting the adventure of listening to the music of Neil Young I give the same piece of advice: Give the ‘80s a chance! Acknowledged as one of the great popular musicians of the ‘60s and ‘70s, the 1980s remain a generally maligned period of his career. However, if one seeks them out, they can find many of Young's greatest songs in the deeply strange music produced between Live Rust and Freedom. Some of this strangeness rubs off on the kitschy movie Human Highway, begun by young in the late ‘70s and released in 1982.

Young, under the pseudonym Bernard Shakey, co-directed the film with veteran actor Dean Stockwell, who also acts alongside Young in the film. The film is an over the top musical comedy featuring songs by Young and art-pop stars Devo. It’s about a small gas station and diner, the strange characters that inhabit it, and the eventual nuclear holocaust that destroys it and the world.

Talking to The New York Times as the film was being re-released, Neil Young claimed that the film was more of an experiment in filmmaking and an opportunity to act. In the same piece, Young and co-star Charlotte Stewart describe how the film was initially unscripted, with planning taking place in the morning and actual writing of the script being done post-shooting (in the biography Shakey, it’s revealed Young thought this was akin to how Chaplin made film).

However, in Shakey, some of the members of Devo depressingly speak to the drink and drug heavy atmosphere on the set, where they were frequently antagonized by Hopper and Stockwell. Talking to The New York Times, Devo's Bob Casale pointedly refers to Stockwell and Hopper as both “at the nadir of the financial box office success” while still “somewhat entitled,” before claiming that Hopper had accidentally cut co-star Sally Kirkland with a knife in a fight causing an ambulance to come (maybe tellingly, Shakey also has Hopper describing making the film as “a great fuckin’ party”).

According to a press release from Shakey Pictures, the production company behind Human Highway, the movie essentially faded away after the film’s festival premiere, with the major exception of a ‘90s VHS/Laser Disc release, before being restored and re-cut for a 2014 re-release. This did not stop Variety from calling it a “simple story about simple people that is simply awful” or the L.A Times ranking it the 521st best “rock film” in 1984, just being beat out by Magical Mystery Tour at #520. Today, and perhaps then, the film is not without its defenders. At the defunct website The Dissolve, Noel Murray kindly described the film as a “live-action Ralph Bashki film, full of druggy jive and attitude.”

As Human Highway was first being released, Young was working on and touring with the music of Trans, a polarizing 1982 record defined by a heavy use of vocoder on Neil Young’s vocals. In a lengthy 1982 interview with Cameron Crowe, he discusses the way in which he says “computer music is like a mask” and how he liked the different characters he could slip into via vocoder. He excitedly talks about the boundless musical potential that the vocoder holds for him. The appealingly artificial quality of Young’s voice using the vocoder helps set the stage for Human Highway.

Human Highway revels in artificiality. Asked about a potential influence for the film in Shakey, Young says, “Cheap Japanese horror-movie kind of things? I like that vibe. I like something that’s so unreal that you could believe it…”. He also claimed, “I wanted [Human Highway] to look like a storybook so people could realize that there was nothing real about it.” From the ornate props and sets to the trains running in the background that evoke Young’s own massive model train set, the film looks like the best kind of fake.

As well as this, when the film focuses on music, it excels. An early dance number with Devo performing “It Takes a Worried Man” at a nuclear power plant lets you soak in the garish irradiated aesthetic of Devo’s costume design; a dream sequence where we see Devo, featuring Booji Boy on vocals, perform “Hey Hey, My My (Out of the Black)” with Young sporting a Sex Pistols shirt is legitimately grotesque; and a final reprise with the whole cast of “It Takes a Worried Man” is charmingly grandiose.

Best of all is a scene where Young, playing a mechanic named Lionel, discovers the tuning-fork-like properties of wrenches in his garage. Musically, the scene builds and builds. As Young continues to hit the metal, he also starts to whistle, which is supported by a non-diegetic score that sweeps in. The scene culminates in an also non-diegetic roar of applause. The Neil Young who excitedly told Crowe about all the new musical machines he anticipated playing with is evident in this blissful moment. Neil Young's passion for artifice and an ability to let great musicianship takeover is what ultimately makes Human Highway worth seeing.

<<An Upside Down Disaster: THE POSEIDON ADVENTURE
Just Added! TAKE ME Screening, May 12. Pat Healy in Person!>>