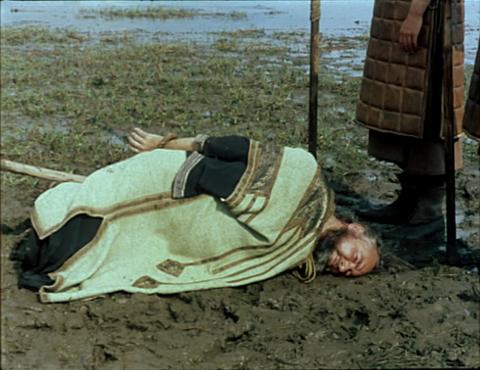 These notes on Moses and Aaron were written by Zachary Zahos, PhD candidate in UW Madison’s Department of Communication Arts. A DCP restoration of Moses and Aaron will screen as part of our Straub-Huillet series on Saturday, April 15 at 7 p.m. in our regular venue, 4070 Vilas Hall. The feature will be preceded by Straub-Huillet's 1962 short Machorka-Muff.

Stalking the stage of Alice Tully Hall, Jean-Marie Straub read aloud the New York Times review of Moses and Aaron, his and Danièle Huillet’s new film. Or, as the paper called it, “Aaron and Moses,” which was assessed as follows: “In his latest film—it can't be called a movie because virtually nothing moves, neither the camera nor what it is photographing—Mr. Straub has come close to purging the screen of anything to see. At the same time, he will come close to purging the movie theater of anybody to watch.” Straub’s Q&A at the 1975 New York Film Festival devolved into an apoplectic live reading of the review and did not recover.

Insipid the review may be—the critic dismisses Arnold Schoenberg because he is “rarely whistled” today—it anticipates a famous quote from Straub himself: “We make our films so that audiences can walk out of them.” Given that the reportedly “accessible” The Chronicle of Anna Magdalena Bach prompted upwards of ten walkouts from 4070 Vilas last Saturday, it is safe to say that Straub and Huillet (who were married until the latter’s death in 2006) still hit a nerve. With their unorthodox, materialist film style and hard-left politics, this French duo has smoldered at the fringes of international art cinema for over five decades.

Which is to say that Moses and Aaron, a masterpiece, poses certain challenges. When struggling to comprehend a Straub-Huillet film, the viewer has less of a chance to simply “bathe in” its sensory details as he may do when viewing, say, an Antonioni or Tarkovsky film. Moses and Aaron’s stunning, plein air 35mm cinematography offers, if you let it, as many pleasures as any Tarkovsky, but the difference here is that Straub and Huillet insist, within their films and in interviews, on the importance of meaning. “Most of all, the film is an idea,” Straub said, directly, of Moses and Aaron. Across their filmography, that central idea boils down to the tension, informed by Marxist dialectics, between ideas and the means through which we express them.

By more than coincidence, the source text for this film, Schoenberg’s opera Moses und Aron, concerns the very same and very first struggle. Beginning with the burning bush, the libretto dramatizes Moses’s failed efforts to communicate the Word of God, clearly and faithfully, to the Hebrews. Detecting an autocratic impulse in Moses’s insistence that he alone comprehends God, Aaron permits the Hebrews their idolatry—in the form of a golden calf—while Moses spends his 40 days on Mount Sinai. This betrayal further disparages Moses’s pure, formless notion of the Almighty. This dichotomy between Moses and Aaron extends from the libretto to the score. As Claudia Plummer observes, Schoenberg “writes Moses’ part in Sprechstimme (a declamatory mode of vocal operatic performance), while Aaron’s part is assigned to the lyrical colorations of a bel canto tenor.” Provided you are not alienated by opera on principle, and can tolerate Schoenberg’s twelve-tone technique on top of that, the container of “opera” gives neat structure and form to Straub and Huillet’s own ideas.

As they did for The Chronicle of Anna Magdalena Bach, Straub and Huillet went to lengths to ensure the precise, pristine recording of direct sound. Unlike their 1968 film, which took place entirely indoors, Moses and Aaron’s outdoor setting posed difficulties in scouting for Italian locations hospitable to the recording of an entire opera. Huillet said they first looked for a plateau, but “no matter how beautiful” what they initially found, “everything was lost in the air and the wind.” They decided on the ancient Alba Fucens amphitheater in Abruzzo. “In the end,” Huillet reflected, “we saw that to film in a basin ... was better for the images too, because we had a natural theatrical space in which the subject, instead of being dissolved, was concentrated.” Critics Manny Farber and Patricia Patterson, another cinephile power couple, grasped Straub and Huillet’s achievement, praising in Film Comment “the delicious and joyful Moses and Aaron” as “one of the few times when weather, sound, and physical setting have been united with such tactile objectivity.”

For those still daunted by the task of the film before them, perhaps it bears a passing mention that Straub and Huillet’s favorite filmmaker is John Ford. For distinct reasons, maybe: Per Straub, Ford is the “most Brechtian” director, in that “‘he shows things that make people think” rather than feeding “images that tell them what to think.” Despite diametrically opposed production and distribution strategies between the two filmmakers (Straub and Huillet filmed mostly in Germany and Italy, with university screenings as the norm), the generosity Straub finds in Ford is a quality Straub and Huillet also together share.

While at first forbidding, the Straub-Huillet project beckons the intellectually and aesthetically curious. “I don’t think a film should impose at all the ideas of a director,” Straub has said. “He should propose ideas that people can accept or refuse.” The struggle for the viewer to comprehend those ideas in the first place is very real, but in Moses and Aaron’s case, the staggering final scene states the themes clearly while leaving open their political consequence. Commenting on the film’s ending forty years ago, Straub predicted a stark future: “All of a sudden you see this reaction in the audiences that have seen the film. The bourgeoisie cannot accept this film, because it says something at the end that they don't want to admit. It says, ‘It can't last. The established order just can't last.’”

<<The Controversy of CRUISING
An Upside Down Disaster: THE POSEIDON ADVENTURE>>