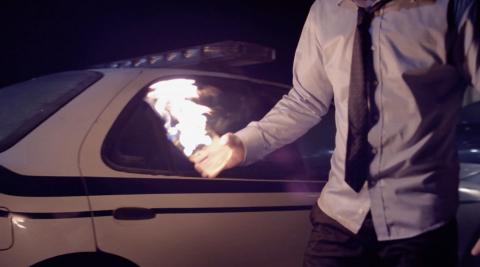 UPDATE: We have reached our limit of free views of Just Don't Think I'll Scream and There Are Not Thirty-six Ways of Showing a Man Getting on a Horse. Thank you for making this presentation such a success!

While our campus theatrical venues remain closed, the Cinematheque is continuing our series of movies you can watch at home for free with two fascinating selections: Frank Beauvais' Just Don't Think I'll Scream and Nicolás Zukerfeld's There Are Not Thirty-six Ways of Showing a Man Getting on a Horse. Both selections use existing footage from other movies to tell new stories and examine the power of cinema. Just Don't Think I'll Scream is another excellent title originally selected for the 2020 Wisconsin Film Festival and There Are Not Thirty-six Ways was an official selection of the 2020 New York Film Festival.

JUST DON'T THINK I'LL SCREAM (NE CROYEZ SURTOUT PAS QUE JE HURLE | 2019 | France | 75 min. | French with English subtitles | Directed by Frank Beauvais) “I watched over 400 films between April and October 2016. This footage comes from them.” So begins Frank Beauvais’s astonishing feature debut, a found footage memoir refracting seven tumultuous months of life through an unceasing fusillade of movie clips. With Knausgaardian candor, Beauvais narrates the story of his break-up; his father’s death; his life in provincial Alsace, France; and above all, his all-consuming cinephilia, which accelerates as personal calamity and world events (from the Bastille Day attack in Nice to Prince's passing) lead him further inward. The film’s rapid, wildly imaginative montage toggles between film snippets largely obscure and hard-to-place: a Pre-Code dame here, a giallo knife plunge there, an aside on all the Soviet films cluttering his hard drive, John Carpenter’s Christine, etc. Just Don’t Think I’ll Scream offers an incisive, full-bore exploration of all the ways obsessive movie watching can bleed into one’s personal life, and vice versa. (Zachary Zahos)

THERE ARE NOT THIRTY-SIX WAYS OF SHOWING A MAN GETTING ON A HORSE (NO EXISTEN TREINTA Y SEIS MANERAS DE MOSTRAR COMO UN HOMBRE SE SUBE A UN CABALLO | 2020 | Argentina | 63 min. | English and Spanish with English subtitles | Directed by Nicolás Zukerfeld) Pure pleasure for cinephiles, this illuminating essay film examines the oeuvre of the classic Hollywood director Raoul Walsh. The first half is a briskly edited catalog of clips from Walsh’s films, locating parallel actions and reactions from across Walsh’s fifty-year career. The second half delves into correctly attributing the quote that forms the film’s lengthy title, pursuing this academic grind with the intrigue of a detective story. Argentine filmmaker Nicolás Zukerfeld’s witty ride through film history has been praised by Artforum as an “exhilarating voyage through academia and film scholarship… a wildly edited, unabashed paean to classic Hollywood cinema.” (Mike King).

For a limited time beginning April 15, the Cinematheque has a limited number of opportunities to watch both Beauvais and Zukerfeld's movies at home for free. PLEASE NOTE: There Are Not Thirty-six Ways of Showing a Man Getting on a Horse is not available for viewing outside the U.S. To receive instructions, send an email to info@cinema.wisc.edu and simply remember to include the word MOVIES in the subject line. No further message is necessary.