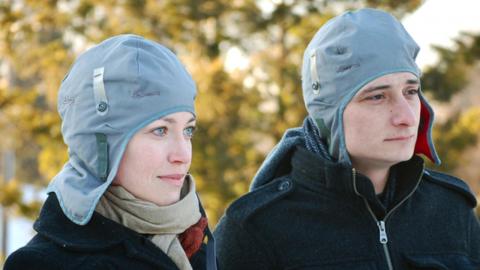 While our campus theatrical venues remain closed, the Cinematheque is continuing our series of movies you can watch at home for free with a triple feature by Midwest-based independent filmmaker Frank V. Ross: Audrey the Trainwreck, Tiger Tail in Blue, and Bloomin Mud Shuffle. The latter two titles were selections of past editions of the Wisconsin Film Festival and all three movies are available to watch at home for free through May 6 only.

Plus, on a new episode of our Cinematalk podcast, Frank Ross talks with the Cinematheque's Mike King about these three selections and his career in cinema. You can listen below or subscribe to Cinematalk through Apple Podcasts.

AUDREY THE TRAINWRECK (2010 | USA | 85 min. | Directed by Frank V. Ross | Cast: Anthony J. Baker, Alexi Wasser, Nick Offerman) Ron and Stacy are in the grind. Working unfulfilling jobs in the Chicago suburbs, they are frustrated with their day-to-day lives, but also too worn out and into their respective grooves to do anything drastic about it. But after meeting through an internet dating site, these two find in each other someone who speaks their language. Writer/director Frank V. Ross’s funny, acerbic, and scrappy gem has only grown more potent in the decade since its premiere at the 2010 SXSW Film Festival. (Mike King) “[A] scruffy, tender but very funny romance... Ross is something of an indie Robert Altman, with his huge cast of characters and plaited strands of dialogue, and he has a sharp and comic eye for intimacy, domesticity, and practicality. Ross’s images, for all their apparent casualness, display a rare and delicate wit and whimsy. The movie is a treasure” (Richard Brody, The New Yorker).

TIGER TAIL IN BLUE (2012 | USA | 80 min. | Directed By Frank V. Ross | Cast: Frank V. Ross, Rebecca Spence, Megan Mercier) A bracingly honest depiction of a young working-class marriage, Tiger Tail in Blue examines what happens when romance gives way to routine. Struggling writer Chris (played by writer/ director Frank V. Ross) waits tables at night, which puts him at opposing schedules with his new wife Melody, a teacher. Typical marital issues (bills, mostly) are compounded by the fact that the two rarely see each other and are often arguing when they do. As Chris spends more time away from his wife, he develops a workplace crush on a female coworker named Brandy. In a Buñuelian twist, Melody and Brandy are both played by the same actress, Rebecca Spence… until, at a crucial moment, they aren’t. Spence’s dual performances are truly remarkable — at first, you may not even recognize that she is playing both parts. At times caustic, at times melancholy, and at times very funny, these scenes from a marriage are never less than true to life. Featuring a rare film score by John Medeski, Tiger Tail in Blue is “One of the best indie films to surface in the past year” (J.J. Murphy, jjmurphyfilm.com). Nominated for the “Best Film Not Playing at a Theater Near You” at the 2012 Gotham Independent Film Award. (Mike King)

BLOOMIN MUD SHUFFLE (2015 | USA | 75 min. | Directed by Frank V. Ross | ​Cast: James Ransone, Alexia Rasmussen, Alex Karpovsky) Lonnie’s life hasn’t changed much in the 16 years since he graduated high school. Still painting houses, still drinking too much, still hanging out with the same old friends (including Alex Karpovsky of Girls, naturally hilarious as always). As far as he can see, his only hope for the future lies in taking his physical relationship with coworker Monica (a fantastic Alexia Rasmussen) to the next level. A recent college graduate and out of his league, Monica clearly views the older, down-on-his-luck Lonnie as a temporary fling, but he’s more invested. Writer/director Frank V. Ross makes films in and about the blue collar Chicago suburb where he himself lives, capturing the nuances of the working class that are too often absent from contemporary independent cinema. Produced by low-budget stalwart Joe Swanberg (Drinking Buddies, Happy Christmas), Bloomin Mud Shuffle is a gritty gem that wrings hard-earned humor out of tough circumstances. Ross’s seventh film includes strong performances from lead James Ransone (Tangerine), Natasha Lyonne (Orange is the New Black) and Rebecca Spence (star of Ross’s Tiger Tail in Blue), and a score by John Medeski of Medeski Martin & Wood. (Mike King)

To receive instructions on how to see all three Frank V. Ross movies at home for free, send an email to info@cinema.wisc.edu and simply remember to include the word ROSS in the subject line. No further message is necessary.