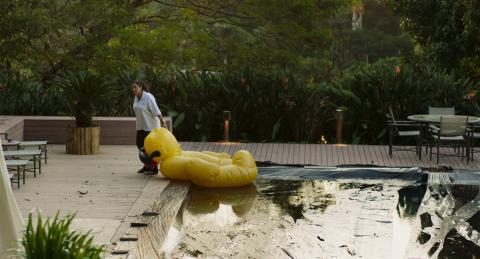 While our campus theatrical venues remain closed, the Cinematheque is continuing our series of movies you can watch at home for free with another excellent title originally selected for the 2020 Wisconsin Film Festival, Sandra Kogut's comedy-drama from Brazil, Three Summers. Three Summers is presented with the support of UW Madison’s Latin American, Caribbean, and Iberian Studies Program (LACIS).

THREE SUMMERS (TRÊS VERÕES | 2019 | 94 min. | Portuguese with English subtitles | Directed by Sandra Kogut) Madá is the middle-aged caretaker for a handful of beachfront villas owned by a wealthy Rio de Janeiro family. During three consecutive summers — 2015 to 2017 —Madá attempts to open her own business while tending to her privileged and not-always-so-kind employers. Later, she becomes a bystander in a major money-laundering scandal, and eventually launches a whole new career. Director & co-writer Sandra Kogut's keenly observed comedy-drama authentically captures the rhythms of daily life and the genuine struggles of working-class people, especially in relation to their pampered employers. A great deal of the credit for the energy and humor of Three Summers must be given to Regina Casé for her funny, charismatic, and very real performance as Madá, a clever and big-hearted character who reminds us that optimism and shrewd judgement are sometimes the most valuable currencies. Case won the award for Best Actress at the 2019 Rio de Janeiro Film Festival.

“Kogut's script allows gentle comedy to seep into her observations of the resilience of those working in the service of others” (Caitlin Quinlan, Cinema Scope).

For a limited time beginning April 8, the Cinematheque has a limited number of opportunities to watch Three Summers at home for free. To receive instructions, send an email to info@cinema.wisc.edu and simply remember to include the word LACIS in the subject line. Three Summers is presented with the support of UW Madison’s Latin American, Caribbean, and Iberian Studies Program (LACIS).