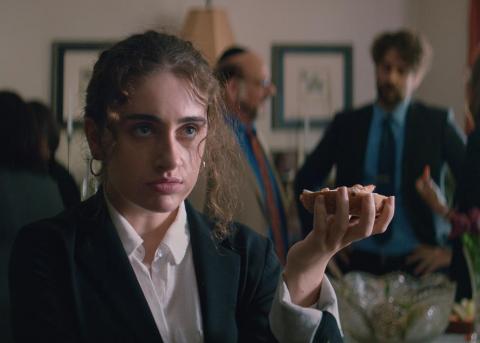 UPDATE: We have reached the free viewing limit for Shiva Baby. This Cinematheque selection is "SOLD OUT".

While our campus theatrical venues remain closed, the Cinematheque is continuing our series of movies you can watch at home for free with Emma Seligman's acclaimed new comedy Shiva Baby.

SHIVA BABY (USA | 2020 | 77 min. | Directed by Emma Seligman) Sitting shiva (the Jewish equivalent of attending a wake) can be painful enough, but when Danielle (Rachel Sennott), a bisexual law student/sex worker discovers that the guests of the shiva she is attending with her parents also include her current “sugar daddy” as well as her secret ex-girlfriend, the tension may be just too much to bear. Emma Seligman’s astonishingly accomplished feature directorial debut is a master class in cringe comedy that continually ratchets up the tension in clever, believable, and sometimes surreal ways. Shiva Baby will make Jews and Gentiles alike howl with laughter while squirming in expertly crafted discomfort (Ben Reiser).

“Having grown up in a tight-knit Jewish community herself, Seligman tightly orchestrates it all with loving cultural specificity and nuance, working her satirical muscles to a thrilling extent.” – Tamris Laffly, Variety

“Shiva Baby unfolds almost entirely in real time, and between the intensity of its presentation, its distinctively Jewish milieu, and its near-fetish for anxiety-inducing social encounters, Seligman’s feature-length directorial debut could make for an interesting double bill with Uncut Gems. “ – David Robb, Slant

For a limited time beginning April 1, the Cinematheque has a limited number of opportunities to watch Shiva Baby at home for free. To receive instructions, send an email to info@cinema.wisc.edu and simply remember to include the word SHIVA in the subject line.