The Controversy of CRUISING 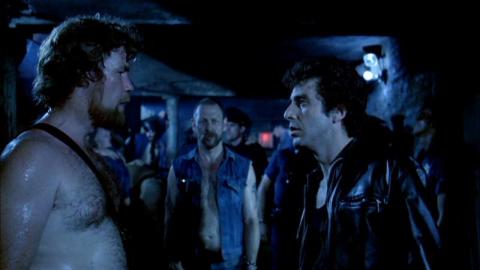 These notes on Cruising were written by Chelsea McCracken, PhD candidate in UW Madison’s Department of Communication Arts. A 35mm print of Cruising will screen as a Special Presentation on Friday, April 14 at 7 p.m. in our regular venue, 4070 Vilas Hall.

The production of William Friedkin’s Cruising in 1980 caused an uproar from the gay and lesbian community.  Cruising follows a detective’s investigation of a serial killer who murders members of the gay S/M leather community.  The film was based on a novel that Vito Russo, in his seminal book The Celluloid Closet, called “homophobic in spirit and in fact; it sees all its gay characters as having been ‘recruited,’ condemned to the sad gay life like modern vampires who must create new victims to survive” (236).  The controversy, intense reactions, and protests sparked by the film reflect a vocal section of the gay community’s concern over Hollywood’s representation of gay characters.  Gay rights activists called for a boycott of the film because, as Philip Shehadi of Gay Community News put it, “the systematic pattern of misrepresentation that has always characterized Hollywood's treatment of homosexuality is simply intolerable, and the release of Cruising is an excellent opportunity to make that statement” (“Cruising: How Dangerous?” (23 February 1980): 1).

Cruising’s script was leaked before production began, giving gay advocacy groups ample time to organize.  Activists created pamphlets to call people to arms against the film.  One such pamphlet noted that violence against homosexuals is rooted in “feelings of hatred and fear” towards a group of people, and films like Cruising “not only reinforce and foster these feelings, they exploit them for profit.”  Put even more forcefully, one pamphlet stated that in Cruising, “gay men are presented as one-dimensional sex-crazed lunatics, vulnerable victims of violence and death.  This is not a film about how we live: it is a film about why we should be killed… ‘Cruising’ is a film which will encourage more violence against homosexuals.  In the current climate of backlash against the gay rights movement, this movie is a genocidal act.”

Cruising was shot in New York City, and by the time filming began, the film had garnered intense criticism and resentment.  Protestors interfered with the production in a number of ways, including crowding shooting locations, unhooking or even cutting cables, and blowing whistles so that shots had to be reshot, all of which cost the production time and money.   The violence of the reaction apparently startled Friedkin, who claimed that the protests went beyond peaceful disagreement and were the result of key, inflammatory articles written about the film, in particular by Arthur Bell of the Village Voice.  Friedkin maintains that the film is not homophobic but rather “just a murder mystery, with the gay leather scene as a backdrop... The vitriol that the film was greeted with still confounds me” (qtd in Alex Simon, “Cruising with Billy.”  Friedkin initially thought he would benefit from the protests and demonstrations, but they ended up working against the film, keeping it from reaching its expected box office potential.  Cruising had a disappointing theatrical run, and some theaters refused to show the film because of the negative press attention.

Gay and lesbian protests did not necessarily reflect the viewpoint of the entire community.  Despite the vocal opposition to the film’s production, more than 1600 gay men participated in the filming of Cruising.  Many of them were members of the leather subculture who welcomed the opportunity to bring attention to a subsection of the gay community that did not get recognition from mainstream gay associations.  Gay liberation political agendas tended to view with embarrassment sexual practices that deviated significantly from normative conventions.  So while some protested the film’s lack of “real images” of gay men, there were others who countered this attack by illustrating that there is no single way to be gay.

Some sensed at the time of its initial release that Cruising could become a gay cult film, and efforts were made to preserve some of the promotional materials and prints.  The film did undergo re-evaluations as it aged, and Cruising has been reclaimed to some extent as a camp time capsule.  As Nathan Lee of The Village Voice put it, the film is a “heady, horny, flashback to the last gasp of full-blown sexual abandon, and easily the most graphic depiction of gay sex ever in a mainstream movie...  The atmosphere of uninhibited sexual camaraderie—invisible to the protestors and long since vanished from the scene—overpowers the trite homophobic conceits.”

While not uniform in their responses, contemporary viewers were heavily influenced by the press surrounding the film, and Cruising’s lasting legacy is deeply informed by the fractious situation of its production and release.  Cruising became a lightning rod for gay visibility, censorship, and conversations about LGBTQ images in media.  In this moment, what was widely considered to be a negative depiction of the gay community brought the issue of gay representations to the forefront of national discussions.  These actions drew more attention to the filmic medium as a battleground of representation, as well as to LGBTQ populations as a political force.

<<'He’s All I Got’: Genre, Gender, and THE MISSOURI BREAKS
Schoenberg Meets Straub-Huillet: MOSES AND AARON>>