'He’s All I Got’: Genre, Gender, and THE MISSOURI BREAKS 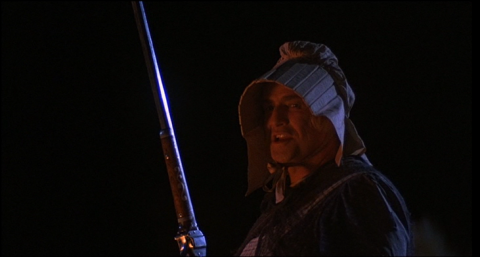 Midway through The Missouri Breaks, after an attempted rustling of Canadian Mounties gone horribly wrong, one of the rustlers, nursing a blown off finger, says of the Mounties chasing them in the U.S., “It’s not even legal!” At different points during Arthur Penn’s 1976 Western, the audience might feel a similar sense of confused shock. In an interview around the release of the film with Film Comment, Penn claims it was the pairing of its stars, Jack Nicholson and Marlon Brando, which drew Penn to the film. After explaining the tight production schedule, relative lack of preparation, and Brando’s difficult work schedule, Penn also claimed the film was more of a for-hire production. This might lead one to think that the film might be a conventional, star-delivery-system, but as the film and Penn’s own comments about it reveal, it is decidedly unconventional. The feeling of something straightforward skidding off the rails––that some fundamental law has been broken––plays a key role in a film that pushes conventions and expectations of genre, performance and gender.

Indeed, Penn did not seem very interested in making a film for everybody, especially in terms of genre. In the Film Comment interview Penn asks, “What is a western?” claiming that he feared that film was being placed into strict categories. (Penn follows up by saying that he didn’t even see the film as a Western, identifying it as an “early robber baron film.”) Reviewers picked up on this strained relationship with the Western genre as well. In an unkind review, Rex Reed refers to the film as “one of those big, brawling, pretentious Stanislavsky Westerns.” In a much warmer Boxoffice review the film is affectionately dubbed “strange on the range.”

Similarly, difficult to characterize is Brando’s turn as the “regulator” Robert E. Lee, who’s hired to defend a small town from rustlers. On set, Brando told Rolling Stone that he read his lines off cue cards, believing that had he memorized them, his lines would sound too rote. In his Film Comment interview, Penn reacted to this interview, maybe worried at the appearance of laziness, saying that he wishes he could express how “publicly frivolous and privately serious Brando is…[he] works alone for three or four hours in the most intensely personal, improvisatory way - searching, searching, searching for some kind of resonance inside himself.” The performance is maybe another shade of the spontaneity that Brando brought to films like A Streetcar Named Desire decades earlier. Fitting Brando and Penn’s own remarks, the performance, which Sight and Sound refers to as having a “mood of pixilated extravagance,” feels unmannered and genuine in a way that clearly reflects craft. His performance becomes a consistently bewildering and entertaining element of the film.

Brando’s strangeness takes many forms, from his vague Irish accent, to his unrepentant sadism, and most notably an overall play with masculinity. In their review, Film Comment claimed that Brando replaced “macho swagger for effete affectations.” Jonathan Lethem, referring to a scene in which a bathing Brando exposes his “appallingly fleshy back,” claims Brando “collapse[s]..his masculine energies” in the film. Looking more at sexuality, in an interview with Brando’s biographer David Thompson, Thompson claims the film has a “witty sort of gay teasing, although a very standard heterosexual figure.” In Brando’s character the way we might conventionally characterize masculinity, especially in a space like the old west, becomes difficult to pin down.

This expands beyond Brando. Penn peppers in small moments of disjuncture where personality traits and power dynamics we might assume from characters based on their gender become questioned. One such scene comes when Kathleen Lloyd’s character intimidates Jack Nicholson by asking him to have sex with her in an open field, briefly seeming to reverse gender roles (before the scene confusingly turns them back). However, the film, predictably, is more interested in the men.

In the film’s greatest moment, Nicholson goes to kill the man who hired Lee, only to find him paralyzed from the shock of the events of the film’s climax. As he attempts to shoot him, his assistant Vern, who has been spooning food into his open mouth, clings onto his limp body, mumbling pleas to have Nicholson shoot him instead. The moment plays on the unexpectedly close relationship between these two, older men breaking the boundaries of masculine kinship. A potentially sweet moment is turned unsettling by Vern’s completely unselfconscious desperation and groveling, turning male intimacy into something queasy. (This appears to be actor Vern Chandler’s only film, which is a shame, because in a movie starring Jack Nicholson and Marlon Brando, he turns in the single most memorable performance.)  In ways that can feel transgressive, or in moments like this, rather questionable, Penn plays with the conventions of sexuality and gender.

Jonathan Lethem and Peter Biskind, in their respective reflections on the film, write rather smugly of 1976, and The Missouri Breaks, as the end of an era for a certain kind of lawless Hollywood filmmaking. For better or worse, the film is a mess of its era, fascinated with questions of genre and masculinity; never fully cohering, but leaving a laundry list of memorable moments.

<<Subterranean Spielberg: INDIANA JONES AND THE TEMPLE OF DOOM
The Controversy of CRUISING>>