The Speediest Film Ever Made?: THE TRIAL OF VIVIENNE WARE 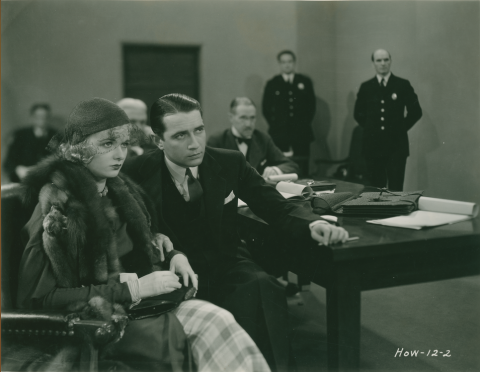 THE TRIAL OF VIVIENNE WARE

The Trial of Vivienne Ware is the product of a long line of both real-world events and multi-media tie-ins: two actual murder trials inspired multiple radio broadcasts, two novels based on those airings, and at least five films (one, an unofficial remake of this film, Just Off Broadway [Fox, 1942]).

Hal Erickson summarizes “All this was prologue for Fox Films’ motion picture adaptation of The Trial of Vivienne Ware, directed by William K. Howard and released on April 29, 1932. Lifting elements from both of his novels, Kenneth Ellis collaborated on the script with Philip Klein and Barry Conners. The result is one of the most exhilarating murder mysteries ever made, its 56-minute running time packed with enough material for at least three movies. Joan Bennet stars as Vivienne, with Donald Cook as her defense attorney (and loyal sweetheart) John  Sutherland, Jameson Thomas as the ill-fated Fenwicke, and Lillian Bond as Dolores Divine.”

There is a general consensus amongst reviewers (both past and present) of The Trial of Vivienne Ware— the film is fast. TCM states on its website that this is “Possibly the speediest film ever made.” MoMA dubs the film’s speech style “machine-gun dialogue.” Others point to the innovative and repeated use of whip pans, a method of cinematography which relies on a quick swivel of the camera on the head of the tripod, rapidly moving from one line of action to another. Still others note the unique storytelling methods taken up by the filmmakers, including multiple flashbacks as well as a radio-inspired blow-by-blow narration (provided by Zasu Pitts).

Beyond Ware’s innovative use of stylistic techniques (sound, cinematography, and narration in the still-early sound era in Hollywood), the film also proved unique in the story it told. According to a New York Times reviewer in 1932: “It is nothing new for film producers to play fast and loose with court-room procedure in their shadow stories, but in ‘The Trial of Vivienne Ware,’ the feature now at the Roxy, the tactics employed are such that they make the liberties taken in other productions seem relatively restrained. In one scene of this current murder trial a dagger is flung across the court room at a woman witness, and later a man is fatally shot while testifying.”

In 1930, after hearing about the successful radio broadcast of an actual courtroom trial in Denmark, editor Edmund D. Coblentz (New York American), decided to enlist a writer to create a similarly serialized, fictional trial to be aired in the U.S. The result was The Trial of Vivienne Ware, a six-night serial program aired on New York’s NBC-Blue affiliate WJZ. The program was part of a multi-media promotional tie-in— each morning, after a segment of the trial had been broadcast on the radio, listeners could read a recap of the proceedings and were encouraged to submit a conclusion for the narrative (for a cash prize).

The script for this program had been heavily influenced by an American true-crime story— the Thaw-White trial of 1906. Harry Kendall Thaw was the son and heir to the fortune of Pittsburgh coal and railroad baron William Thaw, Sr. On June 25, 1906, on the rooftop of Madison Square Garden, Thaw murdered renowned architect Stanford White, who had sexually assaulted Thaw's wife, model/chorus girl Evelyn Nesbit. The trial is notable for the proliferation of yellow journalism and sensationalist reporting surrounding the case, which was met with counter arguments by the wealthy Thaw publicity machine. Indeed, only one week after the murder, a nickelodeon film, Rooftop Murder, was released, rushed into production by Thomas Edison. After one hung jury, Harry Thaw was found not guilty by reason of insanity. Later, the Thaw-White case was worked into the historical tapestry of E.L. Doctorow's novel Ragtime and the 1981 Milos Forman film adaptation. The trial also inspired the 1956 Fox movie, The Girl on the Red Velvet Swing, and the story was modernized by Claude Chabrol for his French drama, A Girl Cut in Two (2008).

As a side-note, several later reviewers have called attention to Joan Bennett’s hair color in this film. She was a natural blonde (as seen here) and later became a brunette. More importantly, Bennett was under contract to Fox Film Corporation at this time and received top-billing on her pictures. Only a year after making Ware, Bennett would move to RKO to play Amy in Little Women (1933), alongside Katherine Hepburn and Frances Dee.