Adventures in 3-D Sound: Re-opening the HOUSE OF WAX 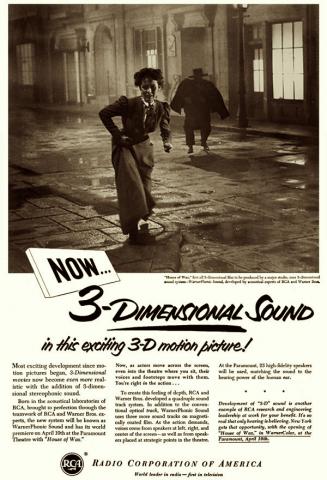 This essay on the sound design in House of Wax (1953) was written by Eric Dienstfrey, doctoral candidate at the University of Wisconsin-Madison.  His dissertation traces the development of surround sound technologies from 1930 to 1959.  His research has been published in Film History and Music and the Moving Image. A restored 3-D and stereo DCP of House of Wax will screen as part of our Cinematheque in 3-D! series on Saturday, January 28 at 5:30 p.m., preceded by the Three Stooges in Spooks.

Warners’ 1953 horror classic House of Wax arguably features some of the most memorable and enjoyable stereoscopic effects produced during Hollywood’s “golden age” of 3-D.  At times the effects recall the primitive aesthetics of earlier forays into stereoscopic technology, such as the carnival barker who slaps his paddle ball into the audience.  At other times the effects are almost laughable, such as the brawl during the film’s climax wherein characters thrust their fists toward the camera and not toward their opponents.  Even more notable, director André De Toth wore an eye-patch when making House of Wax, and was therefore unable to experience the very three-dimensional sensations that have come to define the film’s place in motion picture history.

Less well known, however, is the film’s contribution to stereophonic sound.  Despite contemporary histories—which generally suggest that surround-sound designs are relatively new cinematic phenomena—Hollywood had been implementing and codifying various forms of multi-channel audio since the transition to recorded sound in the late 1920s.  And House of Wax is one of the more fascinating of these stereophonic experiments.

When the film premiered at New York’s Paramount Theatre on April 10th, 1953, it boasted a new four-channel (and five-track) sound system co-developed by Warners and RCA and branded WarnerPhonic Sound.  This stereo configuration consisted of three loudspeakers behind the screen (in a left, center, and right orientation) and a “rear-effects” channel for the many loudspeakers situated on the rear and side walls of the auditorium.  The system also included a monophonic down-mix of the entire four-channel sound design.  This back-up track was present just in case the complicated stereo technology broke down during screenings.

WarnerPhonic stereo offered an inventive conception of motion picture sound reproduction in an era when terms like “high fidelity” and “acoustical realism” were still being defined.  More, it forced filmmakers to answer the following questions: Which sounds should play from the left, right, and surround channels, and how should these sounds function within the film’s story?  Most editors and mixers working in Hollywood at the time felt that extra audio channels were best suited for musical effects, specifically those effects that enhanced the reproduction of orchestral scores.  Nonetheless, Warners’ sound department—led by veteran rerecording mixer George Groves—had another idea in mind.  Instead of using the extra stereo channels for just music, Warners used them to play thrill-inducing sound effects.  These effects included the screams of distressed damsels and the crackling of a burning wax figurines.  In a sense, the surround-sound mix for House of Wax constructed the extra channels to accentuate the emotional drama during scenes when onscreen characters endure life-threatening peril.

Perhaps the most famous of these scenes is during the film’s second reel, when the man in the black cape throws one of his victims down an elevator shaft.  The crack of the victim’s spine as it snaps in two not only plays from the front channels, but from the rear loudspeakers.  In other words, Warners treated the film’s surround-sound effects to work in concert with its three-dimensional visuals: the terrifying images startled the audiences from the front, and the surround sounds continued to assault them from behind.

The release of House of Wax became a thrilling sensory experience for many filmgoers who were lucky enough to attend WarnerPhonic screenings.  And such screenings were not just limited to New York.  Following its initial premiere, the film and its sound system toured throughout much of the United States.  When it played in Kenosha, Wisconsin, the city manager even dubbed the event “Stereophonic 3D Day” in honor of the film’s aesthetic achievements.  But such excitement was short-lived, for the sound system was deemed economically impractical throughout the industry.  It required three strips of film to play simultaneously: two strips for the stereoscopic image, and one additional strip that housed the left, center, and right stereo channels (the rear-effects and mono channels were each housed on the two strips containing the picture tracks).  The use of three filmstrips not only increased distribution costs, in many cities it also demanded more projectionists, thus raising each theater’s overhead.

By the Fall of 1953, and after only a handful of titles were released in this new surround-sound format, Warners ended its WarnerPhonic operations.  All of the studio’s future stereo releases would be distributed onto four-track CinemaScope prints, a format that necessitated only one filmstrip to house a widescreen image and multi-channel sound design.  Subsequent runs of House of Wax would play for audiences in mono, with some reports soon suggesting that the original four-channel mix was lost.

The sound design you will hear at the UW Cinematheque on Saturday is sadly not the original 1953 WarnerPhonic stereo design, but its 1992 restoration.  The newer mix was conducted at Chace Audio, a postproduction facility in Burbank that specializes in up-mixing Hollywood releases for contemporary audio formats.  House of Wax’s four-channel sound design was specifically up-mixed for Dolby Stereo, the leading home video format at the time the restoration was completed.  In order to create their mix, Chace engineers spread the film’s surviving monophonic track across Dolby’s left and right audio channels.  Chace then recorded new sounds to help simulate many of the directional effects that audiences would have heard in 1953.  Pay particular attention to the footsteps as the mystery man stalks Sue (Phyllis Kirk) through New York’s foggy streets, as these are some of the best simulations of how Warners sound department originally mixed the scene for stereo (as advertised).

Fortunately for us, the film’s rear effects channel was archived along with the film’s mono mix.  This act of preservation provided Chace the opportunity to use the original effects track during its 1992 restoration.  And due to Dolby Stereo’s incorporation of matrix encoding, you will be able to hear many of the film’s most salient surround-sound effects play from the rear loudspeakers as they did in 1953.

But I won’t tell you when these acoustical surprises occur.  That would ruin the fun!

<<J.J. Murphy's Favorites of 2016
The Speediest Film Ever Made?: THE TRIAL OF VIVIENNE WARE>>