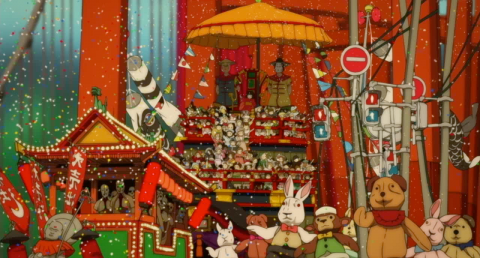 This essay on Satoshi Kon's Paprika (2006) was written by Jacob Mertens, PhD candidate in UW Madison’s Department of Communication Arts. A 35mm print of Paprika will screen at 7 p.m. on Saturday, September 24, a screening that marks the conclusion of our Heroines of Anime series.

The international trailer for Satoshi Kon’s Paprika (2006) offered a compelling pull quote from The New York Times critic Manohla Dargis, stating that Kon’s film proved “that Japanese animators are reaching for the moon, while most of their American counterparts remain stuck in the kiddie sandbox.” The quote never made Dargis’ print review, but resonates in a trailer filled with fantastic imagery. Her words underscore a promise for experimentation and mature themes delivered by a national cinema committed to exploring animation’s full potential. In practice, Paprika over-delivers on this promise, not only demonstrating the diversity of Japan’s animation but also the mastery of a director at the height of his expressive powers.

In the opening sequence of the film, Detective Kogawa Toshimi wanders through his own dream, accompanied by the dream therapist Paprika. The two flit between environments as a circus bleeds into a jungle, then a train, a crowded dock on the water, and a hotel hallway that spans into an endless horizon. Kon transitions between these settings through a series of matches on action, creating a sense of continuity amidst these discordant shifts. In other words, the film’s match cuts help to reinforce the coherence of an otherwise incoherent dream. Kon further complicates this sequence by undermining the dreamer’s identity, such as when the circus crowd suddenly mimics the detective’s appearance and charges him, or by having the world of the dream deteriorate at its end. All this happens in less than three minutes, setting the tone for a film that subverts the boundaries of waking life and fantasy.

Paprika also signaled the culmination of themes that had preoccupied Kon throughout his career. In Perfect Blue (1997), the director used disjunctive edits to disrupt a character’s sense of reality and identity. In Millennium Actress (2001), he used an unconventional narrative structure and matches on action to show an aged actress shifting into past roles and memories. And in Tokyo Godfathers (2003), admittedly the most conventional of Kon’s films, the director privileged characters who are, for one reason or another, haunted by their past while living in a stagnated present. Throughout Kon’s cinema, characters are not always who they say they are or even who they think they are. Notions of identity, memory, and reality remain constantly in flux and the world reflects that uncertainty in increasingly bold and nuanced ways.

These motifs find fruition in Satoshi Kon’s final film. In Paprika, the therapist Dr. Atsuko Chiba gains the ability to enter the dreams of her patients using a device called the DC Mini. Once there, she assumes the appearance and wholly changed personality of her alter-ego Paprika. In real life, Dr. Chiba appears reserved and thoughtful. In the dream world, Paprika is suddenly free and vivacious. Presumably, the dream allows Dr. Chiba to express a part of her personality that remains carefully controlled, and in some respects repressed, in the real world. However, after the DC Mini is stolen, reality and dreams begin to merge and the environment that once gave Dr. Chiba affirmation and freedom becomes compromised by the ill will of other dreamers. As the film spirals, Dr. Chiba must resolve her conflicted sense of self and past suppression of emotions, all while navigating a dream world that devolves into a nightmare. In the end, the film refuses to give its viewers level footing, embracing a radical narrative progression that prioritizes imagination and emotional engagement above all else.

Satoshi Kon’s career was short-lived. He died of pancreatic cancer four years after completing Paprika, at the age of 42. However, with just four films and a televised series to his name, he managed to push the boundaries of style and storytelling in ways that captured the full power of his medium. Unlike some artists who died before their time, we do not have to lament potential left unrealized. Among Satoshi Kon’s limited oeuvre, his first film Perfect Blue and last film Paprika stand out as unquestionable masterpieces. They are films that not only experiment with animation in formally exciting ways but do so while telling stories that make use of animation’s ability to show us a world that can change or dissolve or reconfigure itself at will. And while Perfect Blue was conceived amidst the opening gambit of a new movement in Japanese animation—joined by influential works like Akira (1988), Grave of the Fireflies (1988), Ghost in the Shell (1995), and Princess Mononoke (1997)—Paprika in many ways marked that movement’s zenith. One only wishes that Kon lived long enough to tackle the unenviable task of following up such a critical success.