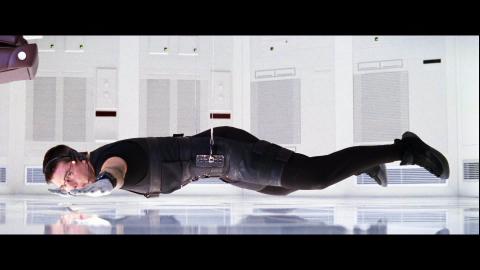 On May 18, 1996, Cleveland hip-hop group Bone Thugs-n-Harmony achieved a level of success that previously seemed unimaginable; their somber but celebratory single “Tha Crossroads” reached the top position on the Billboard Hot 100. The song—written in remembrance of their recently deceased mentor Eazy-E—opens with the following lines: “Now tell me what you gonna do / When it ain’t nowhere to run / When judgment comes for you / When judgment comes for you.”

These were the words you likely would have heard on the radio while driving to the multiplex to see Mission: Impossible on its opening weekend, and if you had followed any of the press leading up to its release, you probably would have felt like judgment had been coming for the film well before then. Take the following introduction from a prerelease Entertainment Weekly story: “Good morning, Mr. Phelps. This microchip contains a photograph of Brian De Palma, director of Mission: Impossible. De Palma has vanished from the realm of movie hyping without a trace. Although publicists for the film deny any knowledge of his whereabouts, sources close to the director say he chose to make himself scarce after a series of creative battles with Impossible star Tom Cruise. Your assignment, should you choose to accept it, is to make sure this movie doesn't self-destruct…”

Budgeted at $85 million, Mission: Impossible was easily the most expensive film De Palma had ever directed—his previous biggest budget was $47 million for 1990’s The Bonfire of the Vanities, a critical and commercial flop—and the strains of blockbuster filmmaking were evident throughout the production process. Some of the problems stemmed from this very budget; EW claims that Paramount executives wanted to “keep the budget for the film in the $40 to $50 million range,” but that Tom Cruise’s “vision” called “for a big, showy action piece” that brought it closer to $62 million. Others came from the screenplay; it went through a troubling set of revisions, with Jurassic Park screenwriter David Koepp receiving $1 million to revamp an earlier script by husband-and-wife team Willard Huyck and Gloria Katz. His version called for an extremely dark and deadly opening to the film, and original cast members of the Mission: Impossible television series such as Peter Graves and Martin Landau were outspoken in the press about their concerns over the film’s tone and its treatment of the source material.

And then there’s the matter of De Palma’s relationship with Cruise. Here, again, is Entertainment Weekly: “Trouble between the director and the star-producer supposedly flared throughout the production. ‘Brian had the s--- beaten out of him by Tom and Paula [Wagner, coproducer],’ says a De Palma crony. ‘Tom second-guessed everything he did. One of the reasons the movie went over budget is that Cruise would change his mind at the last minute. 'I want this couch to be red, not beige.' Things like that. I think Brian felt pulverized during the making of this film.’ Pulverized enough to ditch Mission's press junket earlier this month.”

Yet almost none of these difficulties are apparent in the film itself. As Cineaste writes, “Although Brian De Palma's name was all but ignored in the prerelease ballyhoo for this summer blockbuster, the vision behind this witty adaptation of the hit TV spy series of the Sixties is very recognizable.” From the voyeurism and “movieness” of the film’s opening moments to the discomfort provided by the level of viewer knowledge in the film’s central set piece, Mission: Impossible is pretty soundly a Brian De Palma film. It is smaller, darker, and more contemplative than most of the series’ later entries, and probably a lot more confusing, but that’s part of the film’s enduring appeal; few popcorn films have ever had this much fun in the murkiness of the shadows.

Two full decades later, the franchise is still running strong and loud; the most recent, 2015’s Mission: Impossible — Rogue Nation, was released to critical and commercial success, and industry trades have spent this summer detailing the salary disputes that temporarily halted production on the next. Whether it be John Woo’s stylistic excess, J.J. Abrams’s misguided attempt to center the series around familial drama, or the brief moment studio executives thought they could hand over the series to Jeremy Renner, Cruise and his varying crews at IMF have time and again proven that they will always find somewhere to run, even when it ain’t nowhere to run.

De Palma, however, does not seem likely to run with it (or blockbuster Hollywood), again. In response to a question about the series from Moviefone in 2013, De Palma quips, “It always amazed me why somebody would want to make one thing over and over again. I think Tom has done a fantastic job in keeping this franchise going. It's just, aesthetically, it holds no interest in me. It's all about economics. Why would you want to keep making Mission: Impossibles?”

Even if he cannot, you will probably be able to find the answer (or a couple of answers) in De Palma’s film.

<<Heroines of Anime: PAPRIKA
How Could People Get So Unkind?: Dennis Hopper and Linda Manz’s OUT OF THE BLUE>>