When NAUSICAÄ Became WARRIORS OF THE WIND 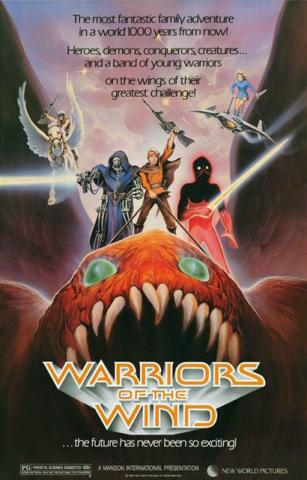 Original American release poster for Warriors of the Wind

These notes on the original American theatrical release of Hayao Miyazaki's Nausicaä of the Valley of the Wind were written by WUD Film's James LaPierre, co-programmer for the Cinematheque's ongoing "Heroines of Anime" series. The original, full-length Japanese version of Nausicaä will screen in a 35mm subtitled print on Saturday, September 10 at 7 p.m. in the Cinematheque's regular venue, 4070 Vilas Hall.

Princess Mononoke was released in Japan in July 1997 to massive critical and commercial success- the film quickly became the highest-grossing Japanese film of the year. When director Hayao Miyazaki was approached by Miramax Films’ CEO Harvey Weinstein about its U.S. distribution, Weinstein demanded that the film be heavily edited in order to appeal to American audiences. Offended by Weinstein’s insistence on modifying his work, Miyazaki left the meeting in anger. Days later, famed Studio Ghibli producer Toshio Suzuki sent a katana sword to Weinstein’s office, with an attached note reading “No cuts.” Miramax heard Miyazaki’s message loud and clear- the film was eventually released theatrically in the U.S. in its original, unedited form. When asked about the incident in a 2005 interview with The Guardian, Miyazaki simply smiled and remarked “I defeated him.”

Why did Miyazaki react defensively when told his film would be recut? The answer dates back to the U.S. release of his earlier 1987 film Nausicaä of the Valley of the Wind. Upon Nausicaä’s release in Japan, the film was met with critical acclaim- leading to the creation of Studio Ghibli shortly thereafter and the desire for Miyazaki to export his work outside of Japan. In 1984, production/distribution company New World Pictures was tasked with bringing the film to United States audiences. A 95-minute recut and English-language dub of the film titled Warriors of the Wind was released theatrically in 1985 with a VHS home video version available shortly thereafter. The plot of the film was modified to more closely resemble a traditional children’s action-adventure movie, and all promotional images featured a slew of male characters, none of which appear in the film. Many of the film's character names were changed (including titular character Princess Nausicaä who became Princess Zandra), and the voice actors working on the film were not told the film's plot line before recording their lines- simply put, Warriors of the Wind was an inferior and distorted version of Miyazaki’s original masterwork. To this day, it remains his only film to have been stripped down for U.S. distribution.

Fortunately, New World Picture’s rights to Nausicaä expired in 1995, leaving it up to Miyazaki and his team to find a new U.S. distributor for his films. In 1996, The Walt Disney Company reached an agreement with Tokuma Shoten (Miyazaki’s publisher)- the deal gave Disney the theatrical and home video distribution rights to most Studio Ghibli films (including Nausicaä of the Valley of the Wind). In 2003, a new English dub of the film was announced with both Patrick Stewart and Uma Thurman cast. The uncut, original 117-minute version of Nausicaä of the Valley of the Wind was released on DVD in the United States in 2005, containing Disney's new dub as well as an improved subtitle translation. This improved version is now available widely on home video, and is the version that will be shown on 35mm for Cinematheque's screening of the film on September 10th.

* Nausicaä finding the Ohm shell in the Toxic Jungle (163 sec)

* Villagers searching for poisonous spores in the fields (28 sec)

* Nausicaä and Asbel’s visit beneath the Toxic Jungle (214 sec)

<<3 WOMEN: Altman and the Feminine Mystique
Heroines of Anime: PAPRIKA>>