THE NIGHT OF THE HUNTER: The Richest Gift a Body Could Have 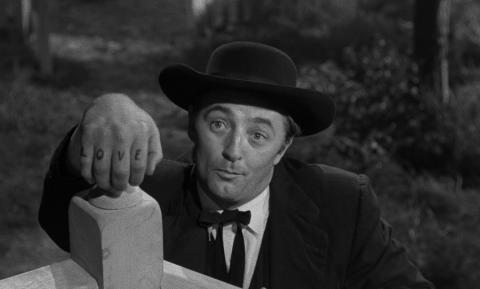 These notes on Charles Laughton's masterpiece, The Night of the Hunter (1955), were written by UW student and WUD Film programmer Vincent Mollica. A 35mm print of The Night of the Hunter, from the UCLA Film and Television Archive, will be the first screening in the Cinematheque's "One and Done" series on Saturday, April 9 at 7 p.m., in the Cinematheque's regular venue, 4070 Vilas Hall.

If I were to choose a single film to introduce someone, of any age, to classic cinema, it would be The Night of the Hunter, a southern gothic-thriller whose great stylishness and emotional depth make it endlessly watchable. Director Charles Laughton was known primarily as an actor, both on stage and on screen, working with many of the most famous filmmakers of the 1930s-1960s such as Alfred Hitchcock, Leo McCarey and Billy Wilder. In the early 1950s Laughton worked with producer Paul Gregory on a bible reading tour as well as theater directing work, before Gregory helped Laughton direct his first and only Hollywood film.

Set in the midst of the Depression, The Night of the Hunter is about a young boy, John, and his younger sister, Pearl, whose father is sent to death row after a bank heist gone wrong. John’s final moment with his father is right before the police whisk him away, in front of their West Virginia home, as he entrusts John with hiding his stolen booty. In prison John’s father meets Harry Powell (Robert Mitchum), a woman-murdering psychopath in preacher’s clothing. Upon learning of his hidden prize, Powell leaves prison to ingratiate himself in John and Pearl’s lives by taking advantage of their lonely mother (Shelly Winters). The film becomes a mind game between Powell and the ever vigilant John who wants nothing more than to protect his father’s honor.

To his great credit, Laughton didn’t squander his time in the director’s chair by making an anonymous actors picture. He thrills his audience by creating a rich, unique, visual world for John and Pearl to get lost in, as laid out in the invaluable featurette, “The Making of the Night of the Hunter” on the Criterion Collection Blu-ray/DVD release. In it author Preston Neal Jones explains that Laughton made the film to return viewers to the era of silent film where he felt they engaged with films on a more active level. Jones and academic Jeffrey Couchman show how the filmmakers set out to create the film’s world from a child’s point of view. They applied stripped down sets, mimicking what a child might notice, and formed expressionistic visuals and special effects to evoke the world of a nightmare (helped in great part by Stanley Cortez’s stark lighting). In skillfully using the medium of film as fully as any of the auteurs he worked under as an actor, Laughton made a film world that thrills and excites an audience in a timeless way.

Although there is clearly great technical skill on the screen, what has always had the most immediate effect on me as a viewer are the film’s performances. Most famous is Robert Mitchum as Harry Powell, whose high theatricality and flair, used to con and manipulate everyone he meets, is constantly on. The drive that Mitchum possesses is especially notable in the film’s final moments, after he has been arrested, and it is as if all the life has drained from his body, reducing him to a human rag doll. Perhaps more than any other one element of the film, there is nothing more reliably entertaining and engrossing than Mitchum’s mannered villainy. My favorite moment with Mitchum is a rare scene where I think we see past this persona. It’s the moment right before he kills Shelly Winters where, in an extravagant long shot, he tenderly reaches to the heavens while, as revealed in a later close up, his face ominously twitches. Benefitted by the shadow on his body and face, which allows us to partly fill in Powell’s emotion ourselves, it comes off as a much more private, genuinely religious, version of Powell.

The second listed adult lead is Lillian Gish, as Ms. Cooper, who protects the children from Powell in the film’s final act. Gish was a carryover from the silent cinema of D.W. Griffith, a director whose work had inspired Laughton and that he had studied in preparation for the film. She transforms her lines, many of which are meant to underline the film’s themes about survival and the durability of youth, from the potentially tacky into something weary and beautiful. However, it’s Billy Chapin that gets my favorite moment of the film. It comes at the very end as Chapin runs, crying, to the arrested, broken Powell, who he begs to just take the money, mirroring his final scene with his father. This scene’s unexpected complexity and sadness haunted me so much when I first saw the film at age 10, I felt the need to try to explain it to anyone who would listen.

Night of the Hunter’s initial commercial failure, which crushed the insecure Laughton, meant he was only allowed create such a rich vision once (his follow up would have been an adaptation of Norman Mailer's novel The Naked and the Dead), which gives an added tragic quality to the film. However, despite this failure The Night of the Hunter has rightfully risen higher and higher in the ranks of the canon of great American cinema over the intervening 60 years. It even spawned a few worthwhile pseudo-remakes: the subversive anti-Reagan slasher The Stepfather, David Gordon Green’s dreamy Undertow and of course Radio Raheem’s take on Mitchum’s Love and Hate speech in Do the Right Thing. Like many “great” pieces of cinema it’s maybe best to not overthink its myriad qualities, as touched on here, while watching the film, and rather let the film come back to you later, piecemeal, like a dream. Watch the film as Laughton intended it to be seen: On the edge of your seat, attention rapt. As if a child.

<<Tales of THE TALES OF HOFFMANN
WALKER: This is a True Story>>