Tales of THE TALES OF HOFFMANN 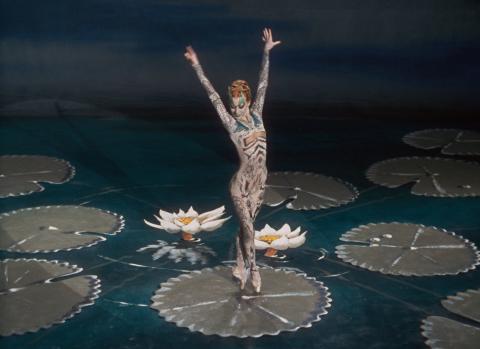 In the fall of 1950, the British fan magazine PictureGoer described The Tales of Hoffmann as a “pure essay in musical fantasy” and “the biggest film experiment since ‘The Red Shoes.’” In fact, you’ll be hard pressed to find contemporary reviews of Michael Powell and Emeric Pressburger’s cinematic endeavor that don’t evoke or make the comparison to the duo’s earlier production, The Red Shoes (1948), a melodrama about the alluring yet sinister world of ballet. The two projects are difficult to separate, given that The Red Shoes laid the groundwork for The Tales of Hoffmann’s marketing and formal experimentation.

The Tales of Hoffmann adapts Jacques Offenbach’s final opera. While waiting to meet the prima ballerina he idolizes, Hoffmann (Robert Rounseville) drunkenly recounts the tales of three of his lost loves: Olympia, an automaton; Giulietta, a courtesan; and Antonia, a consumptive singer. Powell and Pressburger were in part able to put this film into production as a result of The Red Shoes’ international financial success. Producers, as a result, viewed The Red Shoes as a model for selling British prestige pictures abroad. Even though The Tales of Hoffmann adapts an opera, advertising for the film explicitly emphasized images of its ballet dancers over its singers in the ads to indicate the presence of balletic content and draw attention to the overlap of casting between the two films—of dancers Moira Shearer (as both Stella and Olympia), Leonide Massine, and Robert Helpmann, especially. The film’s producers made a point to sell the film’s appeal to American audiences, PictureGoer reports, choosing to premiere the film in the United States instead of Britain, and creating buzz by holding that premiere at the Metropolitan Opera House, making it the first film “ever to be shown at the tradition-bound Met.” Not only was Tales of Hoffmann breaking barriers for cinematic opera, the reviewer suggests, it was expanding the horizons of operatic conventions in general.

Comparisons between the films arise equally because the filmmaking duo saw The Tales of Hoffmann as doing for opera what The Red Shoes did for ballet, and marketed it as such. “The ‘Red Shoes’ Line will be Adapted for ‘Tales of Hoffmann,’” touts Box Office in 1951. Critics were mixed on the earlier film’s narrative qualities but praised its technical achievements and balletic sequences, proving that traditional ballet on screen could be financially profitable. Audiences were equally taken with the visual spectacle of the dancing and impressive set pieces, qualities that Powell and Pressburger sought to re-create in Tales of Hoffmann, this time with the addition of an operatic context. Yet despite the shift in source material, The Tales of Hoffmann contains more dancing than The Red Shoes (as well as a looser narrative), with the ballet sequences largely upstaging the musical performances.

Ultimately, The Tales of Hoffmann did not achieve the critical and audience favor of the earlier Red Shoes; the trade press warns exhibitors that the film’s episodic structure, long running time, and dialogue presented exclusively through song could be challenging to certain demographics, especially those seeking an “evening’s relaxation” at the movies. The film lacks at times the narrative redundancy common in Hollywood cinema, rewarding instead the viewer who devotes their full attention to the stories developing on screen. And you’ll want to: The Tales of Hoffman provides plenty of audiovisual stimuli to delight the senses.

Variety praised the film for its technical achievements, pointing to its inventive use of effects and Technicolor, excellent casting and performance choices, and a “brilliant integration of dance, story and music.” Opera connoisseurs will recognize musical strains from the Jacques Offenbach opera that bears the same name, but there is much in the film to visually impress operatic amateurs. The filmmakers create a variety of optical effects to accompany sequences like the opening “Dragonfly Ballet,” including selective blurring to enhance the sense of blurred motion evoked by Shearer’s fluttering movements. The production consists exclusively of abstract, impressive set pieces, including an early illusion as we shift between shots of a flat scenery wall to one that is painted and filled with posed performers—in the style of living portraits—who join in the fun as Hoffmann recounts his first tale. Powell and Pressburger do not focus their efforts exclusively on the aesthetic qualities of these nested operatic and balletic scenes however; the vignettes also include moments that humorously undercut the flawlessness of the performers (and their athletic bodies) seen elsewhere in the production. We can observe some farcical, mickey-moused gags at the end of Olympia’s number as her neck extends with a rising musical note in the score. The humor becomes more perverse and grotesque, however, when Olympia is torn apart by her makers who then fight and beat one another with her dismembered body parts. With a little something for everyone, Tales of Hoffmann is truly a spectacle of color, movement, and music.

<<IL BRIGANTE screening postponed
THE NIGHT OF THE HUNTER: The Richest Gift a Body Could Have>>