WALKER: This is a True Story 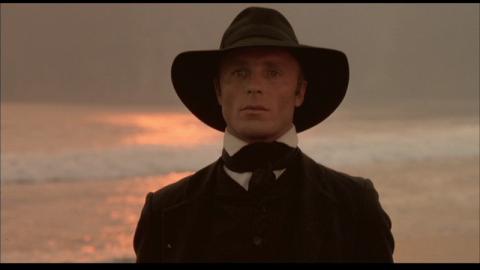 These notes on Alex Cox's Walker (1987) were written by UW student and WUD Film programmer Vincent Mollica. A 35mm print of Walker will be our final Marquee Monday for the spring season on Monday, April 11 at 7 p.m., in the Marquee Theater at Union South.

Walker is perhaps the only film of its type: an ornate 19th century period comedy that is also a vicious piece of political agitprop. Walker is about a real life figure named William Walker, a filibuster who imperialized Nicaragua in the 1850s as a means to create a transit route between the Atlantic and the Pacific. Walker eventually took over Nicaragua’s government, declared himself president, and finally, following much international warfare and intrigue around the mishandling of this transit route, he burned Grenada to the ground and fled. Author T.J Stoles describes him as “one of the most dangerous international criminals of the nineteenth century, if not all our history.” Director Alex Cox (Repo Man, Sid and Nancy) and screenwriter Rudy Wurlitzer (Pat Garrett and Billy the Kid) depict Walker’s mission of manifest destiny as a fraught, bloody, jungle expedition, resulting in the unnecessary deaths of many.

However, Cox was driven less by his interest in Nicaragua in the 1850s than by his interest in Nicaragua in the 1980s. At this time the leftist Sandinista government, who had recently over thrown Somoza’s dictatorship, was under attack by “contras.” These were counterrevolutionaries who, as revealed in Iran-Contra, were funded by President Reagan’s administration, which was implementing its own subtler form of imperialism. Cox claims that while visiting Nicaragua, two Sandinistas asked if he would make a movie there, planting the seeds of what would become Walker. Of this, Cox later said on his website, “If people like these two lads could overthrow a hated dictator and American stooge, how hard could it be for two gringos to scam some money in the USA, bring it back and make a movie about Nicaraguan history, Nicaraguan reality?” In making a Hollywood film almost entirely in Nicaragua, using William Walker’s invasion as an explicit allegory of US-Nicaraguan relations at the time, Cox did just that (if you need that proved, just stay for the film’s end credits, which may go down as one of the most explicitly political moments in Hollywood film).

Using visual anachronisms, like props of Time magazine or Coke bottles strewn in period setting, Cox draws these two periods of American history together. These anachronisms are a good example of how Walker moves far away from a realistic style, embracing lunacy over honesty. With its barrage of sight gags, over the top violence and cartoonish performances, the world of Walker barely resembles our own. Speaking on and pointing out these stylistic elements on the film’s DVD commentary, Cox claims “we’re struggling against a conventional narrative, we’re working in a revolutionary country and we’re trying to make a film that is itself revolutionary.” This was not a film to passively view, reflect on, and agree with, but a film that would confront and agitate viewers.

Not all the film’s politics are so loud though. As Cox gets at in his commentary, at different parts of the film, the story will pause and focus on small moments and dialogues, to investigate the racial, ethnic, and gender politics debated among its different characters. Walker and his black right hand man exchange passages from Walker’s own journal to debate his instatement of slavery; a real life Sandinista actor works to inform audiences of the contra point of view by acting in the film as a Walker sympathizer who walks through a street Walker’s army has ravaged screaming Walker’s praises; Walker’s politically engaged deaf fiancé (Marlee Matlin) confronts him for mistranslating her sign language to other politicians and generally calling out his spinelessness. These moments are political and often stylistically “revolutionary” in their own, smaller way.

Of course, the film was a complete failure which ensured Cox was locked out of Hollywood for the rest of his career. In a short feature on the Criterion DVD, Cox goes through various negative reviews from the film’s release, which mostly chide it for it being “clever.” It’s perhaps understandable that critics—and audiences—were not quite ready to embrace Cox’s aggressive attitude and disregard for convention, but it’s a shame nonetheless. It’s also a shame that—like 1987’s other US-Policy related Hollywood super-flop, Ishtar—the film has never developed the cult audience a film like Repo Man has (it doesn’t even carry Ishtar’s infamy). Even removed from its political nature, the film’s loud, punk aesthetic is deeply satisfying. It gives a transgressive sense of clutter and disarray, that only a Hollywood budget can allow, that also doesn’t feel too exhausting or unfocused. It’s richly deserving of a second life, if only as a reminder of how subversive and experimental a Hollywood film—let alone a Hollywood comedy—can be.

<<THE NIGHT OF THE HUNTER: The Richest Gift a Body Could Have
3 WOMEN: Altman and the Feminine Mystique>>