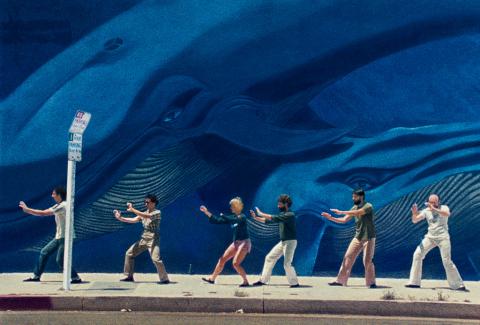 This essay on Agnès Varda's Mur Murs and Documenteur (both 1981) was written by Jenny Oyallon-Koloski, Ph.D. candidate in the Department of Communication Arts at UW Madison. Mur Murs and Documenteur will both screen on Saturday, November 21, beginning at 7 p.m., in the Cinematheque's regular venue, 4070 Vilas Hall. The program will begin with a special introduction by Kelley Conway, Professor of Film, author of Contemporary Film Director's: Agnès Varda, now available from Univeristy of Illinois Press.

Agnès Varda enjoys filming real people. She says as much in Varda par Agnès, suggesting that she likes “watching them put themselves into the scene, listening to the way they talk, observing their gestures, their settings, and the objects they surround themselves with.” Her children, Rosalie Varda-Demy and Mathieu Demy, would agree with her. The latter proposes in an interview that his mother has always chosen to work with reality, in stark contrast to his father, fellow filmmaker Jacques Demy, who stresses instead “the importance of tales and wonder.”

Varda and Demy spent several years in Los Angles at the end of the 1960s, during which time she became fascinated with the proliferation of murals around the city. A subsequent visit to California from 1979 to 1981 revitalized the interest, and Varda spent months inventorying and studying the neighborhood-specific art forms. Made in part thanks to a grant from the French Ministry of Culture, Murs Murs (1981) is the result of Varda’s determination to discover the creators behind these murals and interview them by their art. “Murs has all the sun and glory of Los Angeles,” the filmmaker tells Variety: “It’s all in there—the bad, like gang killings, as well as the good. But it’s very alive. And the people I filmed say incredible things about this city, about the dream-like quality of life here.” As Varda and her editor, Sabine Mamou, were finishing the final cut, an idea for a new film—about a woman struggling with the recent separation from her husband—emerged like the “shadow,” as Varda recalls, of the first.

As a continuation of her interest in non-actors, Varda links her narrative strategies in Documenteur (1981) to several of her earlier works—La Pointe Courte (1955), L’Opéra-Mouffe (1958), and Cleo de 5 à 7 (1962)—in which she also films everyday people in a documentary style and juxtaposes these images with the fictionalized concerns of her protagonists. The film’s Variety reviewer finds that “Varda has a great eye for composition, with remarkably bleak but arresting shots of the beach where the woman works, accompanied by well-chosen minimalist shots of the city and beach plus montages of blank, lonely faces.” But Varda’s subsequent Los Angeles-based project is also a family affair. Sabine Mamou emerged as the natural choice in Varda’s mind to play Emilie because of her presence during the early planning stages but also because “she was like a part of the family.” The natural choice, then, to play Emilie’s son, Martin, was Mathieu Demy.

The incorporation of friends and family, especially, into her work is not unusual for Varda’s filmmaking practice, or for the greater Varda-Demy household. Rosalie Varda-Demy can be seen in Varda’s earlier film One Sings, the Other Doesn’t (1977) and had small roles as a child in some of Demy’s films, notably playing Genvieve’s daughter at the end of Les Parapluies de Cherbourg (1964). She subsequently pursued a career as a costume designer, working on several of Demy’s later films as well as Varda’s Vagabond (1985). Mathieu Demy, now a professional actor and filmmaker, appears in Varda’s Jane B. par Agnès V. (1988) and Kung-Fu Master! (1988), while also playing a bit role in Demy’s final feature of the same year, Trois places pour le 26 (1988). His presence in Documenteur seems to have stuck with him the most, however, as he incorporates shots from Varda’s film into his directorial debut, Americano (2011). As Varda explains before a 2014 screening of her film at the Cinémathèque française, her son’s desire to incorporate parts of Documenteur motivated a restoration that appealed to both parties, since “he got the bits he wanted, and I got the rest.” The choice to cast family members in her film, especially, allows us to observe what Mathieu Demy refers to as Varda’s “re-appropriation of reality.”

We should be wary of taking these people’s realities and Varda’s portrayals of them at face value. The pun in Documenteur (menteur = liar) suggests as much. But we also cannot completely separate the film’s fictionalized account of a woman and her son’s struggles from Varda’s separation from Jacques Demy during this period; “like much of Varda’s work” Variety suggests, “the film is more than a little autobiographical.” Rosalie mentions in an interview that Documenteur was an emotionally difficult film for her to watch at the time of its making, given its “focus on Agnès’ suffering.” Mathieu also remembers the early 1980s as a painful period, but recalls with pleasure his time roller-skating around Los Angles with his father. A photograph from Varda’s collection shows the duo in action, with a series of abstract murals framing them in the background. Like Mathieu and Jacques Demy skating around Venice Beach, Varda’s films and their blend of reality and fiction will never cease to keep us on our toes.

<<I Am a Child: A Brief History of John and Faith Hubley
"The Apu Trilogy" 1: PATHER PANCHALI>>