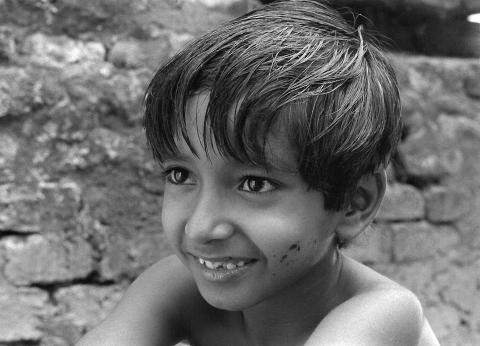 This essay on Satyajit Ray's Pather Panchali was written by Tim Brayton, Ph.D. candidate in the Department of Communication Arts at UW Madison. A newly restored 4K DCP of Pather Panchali, the first film in Ray's Apu trilogy, will screen at the Cinematheque's regular venue, 4070 Vilas Hall, on Friday, December 4, at 7 p.m.

Following its triumph at the 1956 Cannes International Film Festival, Satyajit Ray's debut as writer and director, Pather Panchali [aka Song of the Little Road], was immediately put under the unfair burden of being the cinematic ambassador of Indian filmmaking in Europe and America. For it was the first film made on the subcontinent to enjoy any kind of meaningful international release, and the critics of the world were quick to identify it as a masterpiece. Which it is; but it's still the worst kind of cultural pandering. Of course, there isn't such a thing as "Indian filmmaking", only a collection of regional and linguistic filmmaking traditions. Even if that weren't the case, Pather Panchali wouldn't be the film to exemplify anything other than the latent talent of its creator: a graphic designer working in advertising, with the beating heart of a great cinephile.

In 1947, Ray co-founded the Calcutta Film Society, which would soon become one of the primary conduits by which that city's audiences could have any access to foreign films. It was around that year that he first hit upon the idea to adapt Bibhutibhushan Bandopadhyay's 1928 novel Pather Panchali into a movie, though the mechanism for doing so wouldn't become clear to him for a few years. His resolve to become a filmmaker seems to have firmly solidified thanks to two events that occurred in 1950: first, he worked as location scout for Jean Renoir's The River; that autumn, in England, he first saw Bicycle Thieves, which became a primary influence and motivating force on his desire to go out and make a film on his own.

When Pather Panchali emerged—after years of no-budget production racing against the aging process of his juvenile leads—it was far more than just a riff on Italian neorealism. The film is an almost unclassifiable hybrid: the domestic setting and focus on the poverty of a rural family and especially that family's youngest child Apu (Subir Banerjee) are right line with the films of De Sica and Rossellini. So is the use of non-professional actors to make up the bulk of the cast, and the downplaying of any significant plot arc in favor of capturing the unfocused events of the everyday. But the visuals have an expressionistic quality that veers towards melodrama rather than realism: one of Pather Panchali's most striking sequences is a terrifying thunderstorm near the end, with flashes of light transforming the comforting domestic space of the family home into a horror film setting. The score, composed by future superstar sitar player Ravi Shankar, sounds as unabashedly Indian as the rest of the style is European, but this is nowhere near the everything-goes tradition of Hindi-language musicals that dominated Indian film production till then. Pather Panchali was one of the inaugural films in Parallel Cinema movement, a new wave of Bengali-language films derived from literary sources and favoring aesthetic and narrative realism.

Whatever national and international trends Pather Panchali borrows from or discards, what matters most is the film itself. This is one of the finest movies of the 1950s, and among the strongest directorial debuts ever. It is a particularly strong example of a child's-eye view film, though not dogmatically so. In fact, Apu is a mere baby for the first twenty minutes, at which point the action skips ahead, and he's reintroduced to us in a sequence in the annals of character introductions on par with John Ford's zoom into John Wayne early in Stagecoach: he sits up from bed into a dramatic close-up, at which point the score revs up and the film launches into a montage of childhood behavior. These montages show up frequently throughout the film, and they're cumulatively one of its strongest gestures: Shankar's plinking music provides a lulling rhythm, while the onscreen action combines disjointed moments into a single flow, not suggesting the passage of time but instead leaving us with a sense of a constant, eternal present.

Like many films about the experience of childhood, Pather Panchali includes a narrative that occurs above the awareness of its young protagonists, Apu and his older sister Durga (Uma Dasgupta): father Harihar (Kanu Banerjee) dreams of being a poet and artist, but must move away to the city to make a real living, while mother Sarbajaya (Karuna Banerjee) retreats into her own depression as her woes pile up. It's to the great credit of everyone involved, especially Karuna Banerjee, whose reflective, sad performance is one of the great pieces of screen acting in the '50s, that this adult plotline is revealed to us with objective clarity, but without ever swamping the more delicate, aimless material surrounding Apu, who does, after all, remain the anchor of the film's superlative use of perspective. We see, generally, what Apu sees, but we understand more of it than he does. One of the key visual motifs in Pather Panchali are close-ups of Subir Banerjee's face, allowing his dark eyes to dominate our impressions as he stares out at the world around him, preternaturally watchful. We are encouraged, not to match his point-of-view—the close-ups tend to confirm the difference between the boy and the audience, not to elide that difference—but to look where he's looking, with the same intent gaze.

The result is a film that is most successful as a work of observation: settling down in a locale almost as unfamiliar to the urbanite Ray as to his earliest Western audiences, and just trying to see it, in all its fullness. This task becomes far more engaging than ever thanks to Janus Films' brand new 4K reconstruction of the film's badly burned camera negatives, which the Cinematheque will be showing as a DCP; after generations of muddy DVD and VHS transfers, Pather Panchali takes on a clarity and luminosity that very nearly make it a new film altogether. The shapes and textures of the world it depicts are more tangible, the realist aesthetic more overwhelming, and the lives depicted all the more vivid. It is the best possible way to experience a film whose intensely intimate depiction of physically palpable humanity has always been its greatest strength.