A Musical Phoenix: The Resurrection of PHANTOM OF THE PARADISE 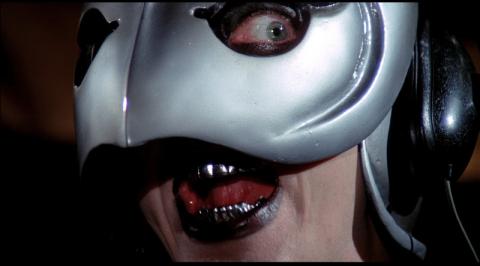 This essay on Brian DePalma's Phantom of the Paradise (1974) was written by Leo Rubinkowski, Ph.D. candidate in the Department of Communication Arts at UW Madison. A 35mm print of Phantom will screen on Sunday, October 18 at 2 p.m., as part of the Sunday Cinematheque at the Chazen's "35mm Forever!" series at the Chazen Museum of Art.

Where my experience with the movies is concerned, the debt I owe my father is substantial. At some indistinct point in my youth, for example, he had the good sense to sit me down and show me Phantom of the Paradise. At the time, I wasn’t well-watched or well-read enough to fully appreciate the strange mélange of references to gothic horror, the music industry, and canonical cinema, but I knew that Phantom was the kind of movie I cared for deeply. Time and experience have only sharpened that love, providing some of the ideas and words necessary to describe and appraise this 1974 oddity’s strange élan and its hold over me.

Speaking for myself, one of the primary pleasures of viewing Phantom of the Paradise is teasing out the various influences and references that pervade Brian De Palma’s script and direction. The most obvious are Gaston Leroux’s 1909 print serial, Le Fantôme de l'Opéra, the tale of Faust, and Oscar Wilde’s The Picture of Dorian Gray. In the latter two cases, De Palma restricts himself to the shared plot point of a deal with the devil (for “worldly experience and power” and youth, respectively). In the first case, though, more particular comparisons exist. Between 1925 and 1962, Universal released three versions of the Phantom story, and De Palma seems to draw most from the 1962 version, produced by Hammer Films. In that film, as in Phantom of the Paradise, the title character is thoroughly a victim of circumstance and others’ treachery, whereas the Phantoms portrayed by the iconic Lon Chaney (in 1925) and by Claude Rains (in 1943) more clearly verge on the obsessive, the violent, and even the insane. For example, in the 1925 adaptation, the Phantom is apparently deformed from birth, and in 1943, he suffers his injuries while taking murderous revenge. By contrast, both the 1962 and 1974 Phantoms wound themselves by accident while trying to sabotage the publication of their stolen compositions. Plot points aside, however, the fact that Phantom of the Paradise used Leroux’s storyline at all was enough for Universal to accuse the film’s production company, Harbor Productions, and its producer, Edward R. Pressman, of copyright infringement. According to Variety, Universal eventually settled out of court, reportedly for an upfront payment and “substantial participation in the film.”

If Phantom of the Paradise draws the general shape of its story from gothic horror, its comedic tone owes as much to popular music. Beef (Garrit Graham) — the proto-metal glam rocker enlisted by Swan (Paul Williams) to open The Paradise — exemplifies this facet, serving mainly as the butt of jokes about prima donna excess and rock and roll’s emphasis on masculinity. Often, the swipes are broad — Beef’s lisp, mannerisms, and general attitude recall those of Roger De Bris in The Producers — but there are smaller touches that reward the careful viewer; for instance, pay attention to the photos on Beef’s vanity mirror. De Palma extracts slightly more subtle comedy from Archie Hahn, Jeffrey Comanor, and Harold Oblong, whose performances as The Juicy Fruits, The Beach Bums, and The Undead simultaneously parody 25 years of pop music stereotypes while showing off the musical range and performative versatility of the musicians themselves.

Equally humorous, but perhaps more difficult to spot because of their specificity, are Phantom’s visual jokes and references to popular cinema. The “Upholstery” number is a fine example: the split screen effect is surely drawn from Sisters, De Palma’s previous film, and the situation of a bomb suspensefully ticking away in a car trunk comes straight out of Welles’ Touch of Evil. In Beef and his back-up band, The Undead, De Palma finds occasion to evoke German Expressionist cinema, specifically The Cabinet of Dr. Caligari. Perhaps the most obvious film reference involves one of De Palma’s favorite points of contact, Alfred Hitchcock, in a loving and lovingly goofy parody of Psycho’s iconic shower scene.

Considering the light tone with which it deploys references and observes influences, as well as the general quality of De Palma’s writing and direction, more than one reviewer anticipated success for Phantom. Variety, in particular, expected the movie to attract both “teenyboppers” and “older filmgoers who can enjoy the inside sophistication.” Six months later, however, the trade called Phantom one of the “fabulous [box office] flops of 1974.” Budgeted at a reported $1.3 million, picked up for distribution by Twentieth Century-Fox for $2 million, and promoted in New York with a $70,000 campaign, the film had earned just $1 million or so in national rentals by the end of April 1975, and returns from a re-issue in 1976 appear to have been similarly poor.

Phantom of the Paradise was not a universal failure, though. North of the border, in Winnipeg, the picture ran a stunning 62 weeks after debuting on December 26, 1974, or so the Canadian Press reported in 2005 on the occasion of the city’s first Phantompalooza. Other unofficial sources cite more conservative run lengths, but all agree that Winnipeg’s support for the movie was unexpected and impressive. (Phantompalooza ran annually for two more years.) The obvious question, as one Winnipeg blogger asks, is “Why Winnipeg?” but I prefer to ask, “Why nowhere else?”

Certainly, the mechanics of Phantom of the Paradise’s long-term (lack of) popularity must be complex, but I can’t help thinking that part of the reason is that it isn’t a transportable musical. By this, I mean that its songs — arguably the most memorable narrative elements of any musical — don’t convey the story adequately on their own. As a backstage musical, in which songs are clearly distinguished as performances within the narrative, Phantom contains few musical performances that explicitly or directly express character motivations or plot. So while the songs do deal with thematic content — “Goodbye, Eddie, Goodbye” looks ahead to Winslow’s (William Finley) self-sacrifice for Phoenix (Jessica Harper), for instance —which of them would I sing to re-capture the experiences of the Phantom committing suicide, Winslow stumbling away from Death Records after his injury, or the Phantom racing to Phoenix’s rescue? As appropriate as gothic organ, violins, and piano are to moments like these, my humming skills are not up to the challenge. With musicals like The Rocky Horror Picture Show, Mary Poppins, or The Sound of Music, we can sing the story back to ourselves, feeling invested and involved. Perhaps this lack of sing-ability partially explains why Phantom has not enjoyed the popularity it deserves.

As it goes, though, the Phantom’s music is for Phoenix; only she can sing it. At least we have the good fortune to listen.