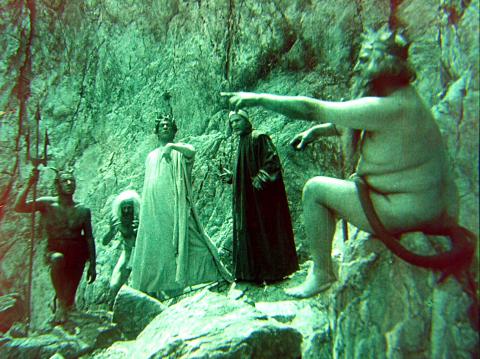 This essay on Stan Brakhage's The Dante Quartet (1987) and L'Inferno (1911) was written by Derek Long, Ph.D. candidate in the Department of Communication Arts at UW Madison. 35mm prints of both films will screen in a special Cinematheque program on Saturday, October 17, at 7 p.m., in our regular venue, 4070 Vilas. Hall. The program will include a special introduction by Professors Patrick Rumble and Jelena Todorović from the Department of French and Italian. L'Inferno will feature live piano accompaniment by David Drazin.

There’s something appropriately purgatorial about the fact that these two Dante-inspired films, which together total seventy-five minutes of screen time, took a grand total of nine years to produce. Even more impressively, Stan Brakhage’s Dante Quartet, leading off the program, accounts for six of those years.

Brakhage’s film, though only eight minutes long, retains the epic scope of Dante’s poetry while distilling it into pure visual abstraction. This may be because each part of the film’s titular quartet—Hell Itself, Hell Spit Flexion, Purgation, and existence is song—evokes Dante’s literal journeys in the Divina Commedia. And yet, one suspects there is more to it than that. Brakhage’s hand-painted technique shows what might happen if Dante were able to transcend his own sense, as related in Paradiso, that his human eyes only permit him to see a particular, limited version of the afterlife. In the later sections of the Quartet, Brakhage invokes this ambiguity of human vision by painting on photographed (rather than clear) film stock, creating brief flashes of the familiar. These images remind us of Dante’s ascension to the Empyrean, the purely luminous abode of God: they are “shadowy prefaces of their truth; not that these things are lacking in themselves; the defect lies in you, whose sight is not yet that sublime” (Paradiso, Canto XXX: 78-81, trans. Allen Mandelbaum).

In contrast to Brakhage’s expressionism, Francesco Bertolini, Adolfo Padovan, and Giuseppe De Liguoro’s 1911 approach in L’Inferno is one of cultish, literalist reverence for some of the most familiar visual representations of Dante’s masterpiece. Each of the film’s fifty-four scenes is a faithful (and occasionally precise) transposition of Gustave Doré’s famous wood-engraved illustrations for his 1861 edition of Inferno. Far from falling into academicism, however, the film renders Doré’s scenes with the aid of impressive visual effects and lavish production values. From the sophisticated matte techniques undergirding the film’s depiction of the “infernal hurricane” blowing the souls of the Lustful, to the winged costumes of the Malebranche, to the double-exposed transformation of the Thieves into reptiles, L’Inferno remains the most technically masterful and visually resplendent film adaptation of Dante’s works.

As poet and translator John P. Welle has noted, L’Inferno was produced at Milano Films at the height of a Dante mania in the Italian film industry; between 1908 and 1912, “no fewer than eleven films based on the Divine Comedy, on Dante’s life, and on figures and scenes of Dantean inspiration” were produced. What set the film apart, however, was the sheer scale of its production. L’Inferno is often cited as Italian cinema’s first feature-length film. In 1911, when L’Inferno was released, the typical film seen by a mass audience (in Italy and elsewhere) rarely exceeded 300 meters—a screening time of about fifteen minutes—and was combined with several other films to form a mixed program. In America, studios like Biograph and Vitagraph could churn out such films every five days for less than $1,000 each. By contrast, L’Inferno spanned 1,200 meters and took three years to produce, at an astounding cost of more than 100,000 lire. It was so long and so big that it could be—indeed had to be—the sole film on a theater’s program, which also meant that it tended to be screened in high-class theatrical and opera venues at inflated ticket prices. According to Welle, L’Inferno’s lighthearted marketing campaign even made reference to these prices in a parody of several verses from Inferno. Virgil’s original line, “Li parenti miei furon Lombardi” (My parents were Lombards, Canto I: 68), is instead given to Dante himself—and a footnote helpfully explains that the poet is trying to establish his family relationship to the film’s producer, Gustavo Lombardo, so that he can get out of paying for a ticket.

L’Inferno wasn’t simply the first Italian feature; it was a superproduction that combined the literary cult of Dante, the supreme production ambitions of the Italian film industry, and cinema’s struggle for cultural legitimacy. When the film reached the United States in the fall of 1911, ads for Pliny Craft’s Monopol Film Company—which held the distribution rights for L’Inferno in the New York metropolitan market—sold the film as “A picture that is destined to establish motography as one of the fine arts…preserving all the dignity and reverence of the original poem and paintings.” The idea of the film as an authentic, faithful literary adaptation was the lynchpin of its success, and further enabled its distribution as a special feature. Indeed, L’Inferno set off an entire cycle of colossal Italian literary-historical films that would be distributed throughout the world, including Quo Vadis (Enrico Guazzoni, 1912), Antony and Cleopatra (Enrico Guazzoni, 1913), and Cabiria (Giovanni Pastrone, 1914). These films had an important effect on American filmmaking; their release in the United States by distributors like Craft and George Kleine helped to spur on the American industry’s production of features in the mid-1910s, from companies like Famous Players, Mutual, and Triangle.

L’Inferno had reverberations in American film history well past the 1910s; the film’s relative explicitness in its depiction of suffering souls in Hell ensured that it was frequently repurposed in other works, often as the starkest imaginable vision of the infernal regions. The American avant-garde filmmaker Kenneth Anger famously used footage from L’Inferno in Inauguration of the Pleasure Dome (1954), his ode to Alastair Crowley and Thelema, but the film had been excerpted some eighteen years previously in exploitation filmmaker Dwain Esper’s appropriately-titled Hell-A-vision (1936), which dwelled, unsurprisingly, on the nude depictions of the damned. Spencer Williams’ under-seen race film Go Down, Death! (1944) faced censorship problems as a result of the same.

In any case, both of these films showcase unforgettable visions of Dante’s afterlife, from the spiritual apprehensions of Brakhage’s pure abstraction to the terrifyingly visceral quality of Doré’s illustrations put to film. These visions remain among the best cinematic adaptations of the Divina Commedia, a work approaching its seven hundredth anniversary. While we have only had one century to appreciate L’Inferno, it will doubtless continue to haunt us.

<<Just Added: SPOTLIGHT screening
A Musical Phoenix: The Resurrection of PHANTOM OF THE PARADISE>>