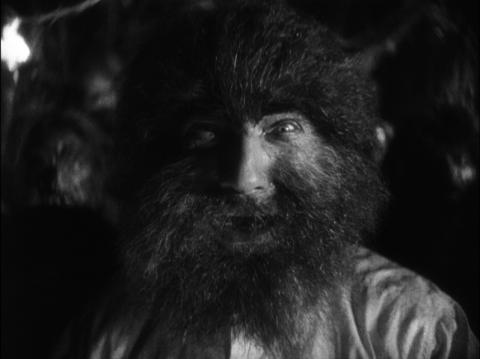 This essay on the 1932 Paramount horror classic The Island of Lost Souls was written by Derek Long, Ph.D. candidate in the Department of Communication Arts at UW Madison. A recently struck 35mm print of The Island of Lost Souls will screen on Sunday, October 25 as part of the Sunday Cinematheque at the Chazen's "35mm Forever" series. The screening begins at 2 p.m. in the Chazen Museum of Art's auditorium.

The so-called “pre-code” period is one of those well-known and much-loved eras in American cinema. In the years between the transition to sound and Joseph Breen’s Production Code enforcement crackdown of mid-1934, Hollywood cinema frequently featured explicit representations of sex, violence, drug use, homosexuality, and other “morally questionable” content, the likes of which would not be seen again until the 1960s. This leeway produced some of the finest films in American cinema, from gritty crime dramas like Scarface and I Am a Fugitive from a Chain Gang to Ernst Lubitsch’s frank and hilarious sex comedies.

Yet hidden among the gems of Hollywood cinema circa 1929-34 are some of the most bizarre, eccentric, and frankly disturbing films ever produced by the major studios. Island of Lost Souls is one of the best of the many weird films of 1932—a year that saw other horror features like Doctor X, White Zombie (coming to the Cinematheque in a new restoration in early 2016), and Murders in the Rue Morgue, but also harder-to-categorize films like Kongo, Chandu the Magician, and of course, Tod Browning’s Freaks (probably still the best weird film of 1932).

Many elements separate Island of Lost Souls from its fellow oddballs, but to start it’s probably worth pointing out that it’s one of the only films classical Hollywood ever produced about vivisection. This was enough to get it banned not only in the UK—where the Board of Film Censors refused to certify it for twenty-five years—but also in Sweden, Denmark, and other countries. For that, of course, the film largely has H.G. Wells’ 1896 novel The Island of Doctor Moreau to thank. Lost Souls remains the best adaptation of Wells’ novel, which tells the tale of Edward Prendick, a man shipwrecked on the private island of a mad scientist who creates human-animal hybrids through vivisection—in short, the kind of story Joe Breen would never have allowed into production in the first place. While there are important deviations, Lost Souls is largely faithful to Wells’ work, at least in broad narrative strokes and in spirit. The film wisely preserves many of the most compelling of Wells’ flourishes, from the Sayer of the Law’s phrase “Are we not men?” (made legendary thanks to Devo) to the “House of Pain,” where Dr. Moreau performs his grotesque acts of montage (and yes, Badgers, the name of that hip-hop group to which you sometimes Jump Around is a reference to the Wells novel).

While horror fans usually associate the early thirties with Universal’s classics, Lost Souls reminds us that Carl Laemmle, Jr. had no monopoly on the genre. Paramount, then in the midst of receivership, produced the film as a standard programmer, but as Variety reported, the studio took a fairly active interest in its production and marketing. Paramount originally assigned the film to Norman Taurog, but apparently decided that his approach to the material did not inject enough humor (!). Consequently, Erle Kenton, a Mack Sennett veteran, was made director. And it apparently worked—at least for L.G. Tewksbury, manager of the Stonington Opera House in Maine, who described the film in a report for his fellow exhibitors as “Weird, but with plenty of comedy relief” (one wonders if Tewksbury was laughing through gritted teeth). Indeed, in true studio form, Paramount’s marketing framed the picture as having something for everyone, with a healthy dose of sex in addition to horror thrills: “He took them from his mad menagerie…nights were horrible with the screams of tortured beasts…from his House of Pain they came remade…Pig-men…Wolf-women…thoughtful Human Apes, and his masterpiece—the Panther Woman—throbbing to the hot flush of love.”

This lurid copy was no accident; Lota the Panther Woman was the centerpiece of Paramount’s marketing campaign for the film. In July 1932, the studio held a highly-publicized nationwide talent contest to cast Lota, with screen tests to be held in the studio’s own Publix theaters. Ernst Lubitsch, Cecil B. De Mille, Rouben Mamoulian, and Norman Taurog were the ostensible judges, with the winner to receive a five-week contract with Paramount at $200 per week. The winner, out of an alleged 60,000 applicants, was Chicago dental hygienist Kathleen Burke, who went on to appear in a number of Paramount films through the rest of the 30s.

Nevertheless, the film’s gruesomeness was just too much for many viewers. While modern audiences may chuckle at the very idea of Lost Souls being horrific enough to ban, we would do well to remember that at the time this film was released, it was effectively torture porn—the Hostel or Saw of its day. Combine that with Paramount’s muscular booking policies, and we might be less surprised to learn that some small-town exhibitors despised the film. S. H. Rich, of the Rich Theatre in Montpelier, Idaho, wrote Motion Picture Herald, “In my opinion the poorest picture from Paramount this season. The makeup of the characters are terrible. How anyone can enjoy this is beyond me. No excuse for making a production of this kind.” Said Michigan exhibitor C. W. Bennett: “Just plain terrible. Impossible story, and characters made up to look horrible. Many women held their hands over their eyes and the rest walked out.” Of course, one wonders how much such appraisals actually helped the film—after all, who wouldn’t want to see the movie described by one Nebraska exhibitor thusly: “Three cheers for the foreign countries who have banned this picture, and shame on us for allowing this to be shown anywhere. Words fail me. Maybe by combining Esperanto, Volopuk, Zahlensproche and a few others I could describe it, and if that won’t, ‘putrid’ will. It actually sickened some of our patrons.”

Contemporary audiences may have been chilled mostly by the beast-men—and Bela Lugosi’s eyes as the Sayer of the Law are just as captivating as Dracula’s—but for my money, this film belongs to Charles Laughton’s whip-wielding, mustachioed Moreau. Laughton’s performance is matched by the unmistakable aesthetics of early-30s studio filmmaking; Moreau’s icy, repeated query to the beast-men—“What is the law?”—is answered not only by Lugosi’s words, but by the grunts, snarls, and screams of the film’s stark, score-less soundtrack (Lost Souls was made at the height of the pre-wall-to-wall scoring era ushered in by Max Steiner’s music for King Kong). The cinematography of Karl Struss, who had lensed F.W. Murnau’s Sunrise just five years earlier, creates on Moreau’s island a world of shimmering, technically-masterful menace—witness the pond light reflected onto a rim-lit Parker (Richard Arlen) and Lota as they embrace, or the classic low-angle expressionism of the lights illuminating Moreau and his assistant Montgomery (Arthur Hohl) as they vivisect some poor soul.

Thus, Island of Lost Souls represents the combination of two irresistible aesthetic traditions: the technical virtuosity of Hollywood filmmaking, and the imagination of H.G. Wells. While the film may have lost some of its power to literally sicken audiences, there’s no doubt that it continues to spook the beast in all of us.

<<A Musical Phoenix: The Resurrection of PHANTOM OF THE PARADISE
THE LUSTY MEN: Never a Cowboy That Couldn't Be Throwed>>