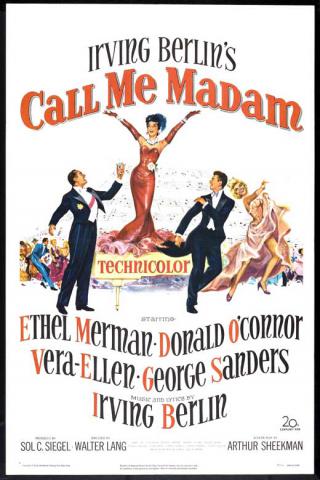 This essay on the classic movie musical Call Me Madam (1953) was written by Cinematheque Programmer and Project Assistant Amanda McQueen. A 35mm print of Call Me Madam will screen on Saturday, April 18, at 7 p.m. in our regular Cinematheque venue, 4070 Vilas Hall.

Ethel Merman is an undisputed icon of musical theater, but she never really made it in Hollywood. Though she appeared in a number of musical shorts and a few features in the 1930s, her subsequent film appearances were sporadic and often critical or financial disappointments. In this light, 20th Century-Fox's adaptation of the Broadway musical Call Me Madam stands out. Reprising her Tony-winning role of socialite-turned-Ambassador Sally Adams, Merman is on comfortable ground in this film and it shows. Her performance was praised by reviewers – The Herald Tribune called her a "double magnum of dry champagne" – and she was ultimately honored with a Golden Globe. But in addition to being the ideal vehicle to showcase Merman's signature belting mezzo and comedic timing, the film version of Call Me Madam has a great deal to recommend it to fans of the musical genre.

With a book by Howard Lindsay and Russel Crouse, and music and lyrics by Irving Berlin, Call Me Madam opened on Broadway in October 1950. Though its romantic comedy underpinnings are fairly standard, its topical political satire of United States foreign policy helped the show click. Merman's character was not-so-subtly based on Perle Mesta, a political hostess known for her lavish parties who served as Ambassador to Luxembourg from 1949 to 1953. Moreover, references to real-life political persons run rampant throughout the show, from recurring jokes about First Daughter Margaret Truman's mediocre singing skills, to the song "They Like Ike," about Dwight D. Eisenhower's potential nomination for president in the upcoming 1952 election. To keep the show up-to-date as it moved from Broadway to touring companies over the next two years, Berlin altered the lyrics to "They Like Ike" three times (Berlin also fashioned the version used as Eisenhower's official campaign song, "I Like Ike"). While critical reviews of the musical were not quite enthusiastic, with Variety noting that it was "hardly a great show, but it's plenty good enough," its popularity with audiences was undeniable. Even in Washington D.C. it was gleefully viewed by the very people it lampooned by name.

In late 1951, Fox entered into negotiations to bring the musical to the big screen. The studio agreed to pay $300,000 for the screen rights – the highest sum paid for a Broadway show since the mid-1940s – but Ethel Merman's participation was a key part of the deal. Merman had undisputedly carried the stage musical; in Variety's words, she was the one "scoring with every song, getting every laugh in the script, and providing the drive, animation, authority and magnetism to capture and hold the audience." And now, with a full year of sellout performances on Broadway behind her, Merman was in a position to demand a salary of $150,000 to appear in the film. Fox balked and negotiations stalled until the rights holders agreed to accept $250,000, freeing up the extra cash needed to secure Merman. The cast was then rounded out with Donald O'Connor as press attaché Kenneth Gibson, Vera-Ellen as the Princess Maria, and an off-cast George Sanders as Sally's love interest, General Cosmo Constantine.

With a budget just shy of $2.5 million – about standard for a top-tier musical at the time –Call Me Madam went into production in July 1952 under Walter Lang’s direction. Arthur Sheekman was hired to write the screenplay, with Irving Berlin on hand to deal with the songs. The show's book was brought to the screen pared down but mostly intact, while a few musical numbers were shuffled around or replaced with other Berlin songs. "Something to Dance About," originally a number for Sally and the ensemble, was repurposed into a duet for Maria and Kenneth as part of the effort to beef up Vera-Ellen's role. "Washington Square Dance" was swapped out for an updated version of the 1913 hit "International Rag," and "Once Upon a Time Today" was replaced by "What Chance Have I With Love?" from Louisiana Purchase (Broadway 1940). But while the film version retains the show's comic satirical core, "They Like Ike" was deemed too political and was dropped.

Sheekman's adaptation is less of a one-woman show than the stage version, and the strong supporting cast justifies this shift in focus. O'Connor and Vera-Ellen have great chemistry as the young lovers, particularly when partnered in one of choreographer Robert Alton's elaborate pas de deux. O'Connor also plays well off Merman, and their counterpoint duet "I Wonder Why (You're Just In Love)" is delightful. Though a relative newcomer to film musicals, Sanders did have professional singing experience (check out his album The George Sanders Touch: Songs for the Lovely Lady from 1958:

In Call Me Madam, you will see that Sanders more than holds his own alongside the others with his warm, lyrical bass voice. And, of course, the film still perfectly showcases Ethel Merman's unique brand of camp.

Call Me Madam premiered in March 1953 to positive reviews and strong box office. Variety praised it as "a literate musical [that] avoids most of the common clichés," and predicted that exhibitors would earn "Much moola with Merman." Though not a huge blockbuster, Call Me Madam was one of the top grossing films of the year, and it received award nominations for its screenplay, musical score, costumes, and direction, on top of Merman's Golden Globe win.

The following year, Fox tried to duplicate its success with its first CinemaScope musical There's No Business Like Show Business, which also featured an Irving Berlin score and a strong ensemble cast including both Merman and O'Connor. But Show Business was a flop – it has started to gain a better reputation in more recent years, however – and Merman would not appear in another movie until her non-singing role in 1963's It's a Mad, Mad, Mad, Mad World. So that leaves Call Me Madam: a musical presenting Ethel Merman at her brassy best. And with Sanders, O'Connor, and Vera-Ellen along for the ride, Call Me Madam is a charming and under-appreciated example of the type of film musical that would become economically unfeasible in just a few years' time.

<<DEATH WISH 3 Screening Postponed Until May 4
Stritch on Film! Matt Connolly on WHO KILLED TEDDY BEAR?>>