Stritch on Film! Matt Connolly on WHO KILLED TEDDY BEAR? 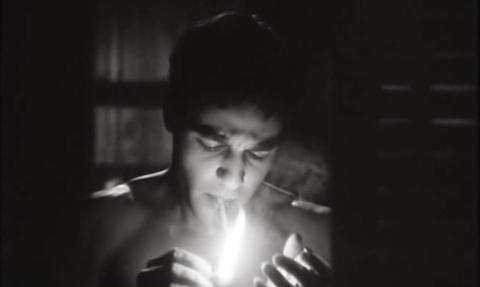 This appreciation of Elaine Stritch and her performance in Who Killed Teddy Bear? (1965) was written by Matthew Connolly, former Cinematheque staff member and Teaching Assistant in the UW Madison Department of Communication Arts. A 35mm print of Who Killed Teddy Bear?, courtesy of the Wisconsin Center for Film and Theater Research, will screen as the second half of a double bill of rare 1960s psychosexual film noirs on Saturday, April 25. An 8:30 p.m. screening of Who Killed Teddy Bear? will be preceded by a 7 p.m. screening of Leslie Stevens' Private Property (1960). Both screenings are free and open to the public.

Though she appeared in films by such famed auteurs as Woody Allen, Alain Resnais, and Blake Edwards, Elaine Stritch has never been much associated with the movies. This makes a certain amount of sense. Throughout a decades-spanning career on Broadway, she gave iconic stage performances in roles dramatic (Edward Albee’s A Delicate Balance) and musical (Stephen Sondheim’s Company), as well as anchoring a solo show that has become increasingly legendary in the annals of contemporary theater. (That show, Elaine Stritch at Liberty, earned her a Tony award after four nominations throughout her career.) Her razor-sharp comic timing, singular stage presence, and nuanced renditions of some of musical theater’s richest songs have linked her indelibly to the Great White Way. As The New York Times wrote in their obituary for Stritch (who died last year at 89),  “the stage was her true professional home. Whether in musicals, nonmusical dramas or solo cabaret shows, she drew audiences to her with her whiskey voice, her seen-it-all manner and the blunt charisma of a star.”

Stritch may have never made the screen her home, but she could translate her stage charisma before the camera in a way that eludes some Broadway stars. Many contemporary viewers most likely know her from television, particularly her Emmy Award-winning work as Jack Donaghy’s domineering mother on 30 Rock. While movie roles rarely offered the dramatic complexity or comic firepower of her best stage and small-screen roles, certain films provide a glimpse at the range of Stritch’s talents.

Who Killed Teddy Bear? offered her such a role. Joseph Cates’s vivid look at the sexual underbelly of mid-60s New York City primarily focuses on Norah (Juliet Prowse) a would-be actress and discotheque DJ whose life becomes upended after receiving a series of obscene and threatening phone calls by a mysterious man. (The gravely voice on the other end turns out to be the club’s psychologically-warped busboy, played by Sal Mineo.) Stritch portrays Marian Freeman, the club’s manager and a confidante to Norah as she grapples with her increasingly unhinged stalker. When we first meet Marian, she’s entering the discotheque floor, puffing a cigarette and tartly reminding her maître d’ to keep up the phony French accent he adopts with guests. It’s the sort of role that one would expect Stritch to play—flinty, no nonsense, tough-yet-fair—and her seen-it-all attitude seems to flow directly from the city itself, captured by Cates in extended, quasi-documentary interludes. (Watching Nora’s sojourns in and out of Broadway theaters at one point, one cannot help but imagine Stritch walking past those same theaters as a young actress.)

As the film progresses, though, we begin to see the full range of Marian’s affections for Nora. This becomes particularly apparent in a painful scene in Nora’s apartment, when Marian comforts her after yet another ominous phone call. Marian tightly embraces Nora on her bed, rubbing her back and comforting her “baby.” Nora slowly realizes the intimacy implied by Marian’s words, pulling away and asking Marian to leave. The scene itself reveals both the ambitions and limitations of the film’s sexual frankness, allowing a lesbian character like Marian visibility for the price of rejection and humiliation. But watch how Stritch plays the scene. Note the salty dash of female camaraderie she gives her observation that every man has a bit of the dark impulses made manifest in Nora’s stalker. Observe the long-squelched tenderness shine in her eyes and warm her steely voice as she comforts Nora—and note how she deflects Nora’s rebuffing with a complicated mixture of embarrassment, insecurity, and a defiant lack of apology. Her fact slowly regains its knowing, weary composure as Nora insists that she will apologize if she “is wrong” about Marian’s intentions. “Oh, yeah?” Marian says flatly. “I’ll look forward to it.” In a film fairly obsessed with notions of erotic dysfunction and its psychological roots, Stritch refuses to turn Marian into a repressed closet case on the prowl. Her performance is a small master class in using the smallest vocal inflections and facial movements to suggest a lifetime of hard scrabble living and tenacious survival.

Such an affinity for tough, sharp women would remain with Stritch throughout her career, from the world-weary Joanne in Company to the slashing wit of Coleen Donaghy to the dramatization of her own struggles with fame, men, and booze in Elaine Stritch at Liberty. Who Killed Teddy Bear? offers a bracing and lovely reminder that this fondness can be found even in the early days of her long and storied career. “Oh, she was a terrific character,” Stritch told the Village Voice’s Melissa Anderson in 2010 when asked about playing Marian. “She was a hard-boiled dame working in surroundings that were the pits in New York. She was a good egg, as my father used to say.”

<<Merman Goes Hollywood!: Amanda McQueen on CALL ME MADAM
A HARD DAY'S NIGHT: "The CITIZEN KANE of the Jukebox Musical">>