A Strange Soundtrack for Your Body's Ears 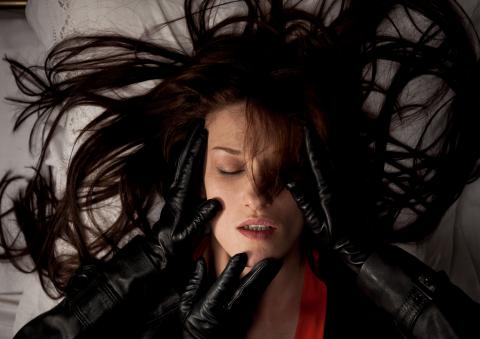 This essay on the music featured in Hélène Cattet and Bruno Forzani's The Strange Color of Your Body's Tears was written by UW Cinematheque Programmer and Chief Projectionist, Mike King. The Strange Color will have its only Madison-area theatrical screening on Friday, October 24 at 7p.m. in the Cinematheque's regular venue, 4070 Vilas Hall.

A Strange Soundtrack for Your Body's Ears

Belgian directing team Hélène Cattet and Bruno Forzani craft modern giallos with unbelievably vivid textural detail.  Their hallucinatory new film, The Strange Color of Your Body’s Tears, is riddled with cinephilic allusions, yet wholly original.  Though clearly indebted to films of the past, the only thing Cattet and Forzani actually copy verbatim is music: much of the soundtrack is directly lifted from the 1970s cinema that inspires them.

Of course, films have been repurposing each others’ music since the studio era, with examples ranging from sly commentary, as when characters in William Wellman’s hardscrabble Depression portrait Wild Boys of the Road ironically whistle “We’re in the Money” from Warner’s contemporaneous Gold Diggers of 1933, to the simply bewildering, as when “Over the Rainbow” appears as a refrain in the seedy 1941 noir I Wake Up Screaming (a title, incidentally, that would fit The Strange Color of Your Body’s Tears like a black leather glove).  In recent years, Quentin Tarantino has become the king of this kind of sonic appropriation, curating Billboard-charting soundtracks that crib from blaxploitation movies and Ennio Morricone scores.  Tarantino traffics in deep cuts, but the more well known the source, the murkier the line between homage and theft—in 2012, Kim Novak cried foul when The Artist swiped Bernard Herrmann’s iconic Vertigo theme.

Like Tarantino, Cattet and Forzani have enviable record collections, and playing DJ is an inextricable part of their creative process.  The duo assembles their soundtrack as they write; music selections are even indicated in the script, so the uncanny fusion of sound and image is embedded from the film’s earliest stages. In an interview with Electric Sheep, Cattet reveals that “music inspires the way a sequence develops. It gives us a rhythm, and ideas too… all of a sudden, there’s one track that strikes us, so we play it again and again.”  For Cattet and Forzani, old giallo scores become muses for the film itself: crate-digging is symbiotic with screenwriting.

Given their subject matter, naturally Cattet and Forzani use a couple of Ennio Morricone cues (his music appeared in their previous giallo, Amer, as well), including this chilling number, originally from The Short Night of the Glass Dolls:

Forzani cited the following Morricone composition from Maddalena as “the most important music” in The Strange Color of Your Body’s Tears.  The breathy vocals accompany one of the film’s most spellbinding sequences.

A few of Strange Color’s non-Morricone pieces exist online, as well.  Originally composed for a 1970 Italian take on The Picture of Dorian Gray (directed by erstwhile Sergio Leone cinematographer Massimo Dallmano), Giuseppe de Luca’s “Rito a Los Angeles” was also used by Steven Soderbergh for a sequence in Ocean’s Twelve.

Cattet and Forzani’s incomparably broad knowledge of exploitation sounds extends even to Italian ripoffs of softcore’s deathless Emmanuelle series.  Nico Fidenco’s “My Boundless” is one of the film’s most memorable cuts.

Just as every other aspect of the film is endlessly revised in the transition from script to screen, not all the music Cattet and Forzani had in mind made it to the final cut.  Cattet cites the theme for Seven Blood-Stained Orchids as “the very first piece we thought of for our film, and it inspired the first drafts.”  Even though it no longer appears in the film, its status as a key inspiration merits inclusion here - consider it a bonus track.