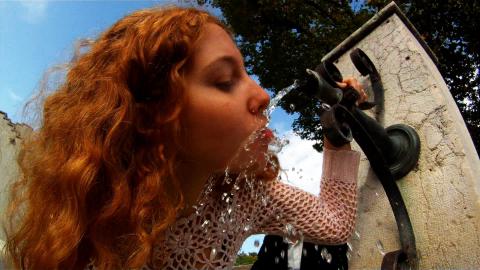 The UW Cinematheque is proud to announce the only Madison-area screening of the latest feature from cinema legend Jean-Luc Godard, Goodbye to Language (Adieu au langage), the director’s first feature-length project in 3D. The 3D benefit screening will take place on Thursday, November 13, at 7 p.m., at the Marcus Point Cinema, 7825 Big Sky Drive, in Madison. Tickets for this screening are $20 and proceeds will benefit the UW Cinematheque’s efforts to bring digital 3D projection to our regular screening venue, 4070 Vilas Hall.

Half a century after igniting the French New Wave with his revolutionary Breathless, Jean-Luc Godard has produced his first 3D feature, a mind-blowing fusion of art and technology that seems beamed in from a future era of moviemaking.  One of cinema’s true visionaries, Godard applies his relentless creativity to 3D, using custom-made camera rigs to conjure breathtaking, eye-bending effects like you’ve never seen before, and that absolutely must be experienced on the big screen.  A magisterial meditation on philosophy, infinity, and the auteur’s own pet dog, Goodbye to Language is as dazzling and invigorating as anything in Godard's legendary filmography.  Far and away one of the most acclaimed films of the year, Goodbye to Language won the Jury Prize at the 2014 Cannes Film Festival, where New York Times critic Manohla Dargis called it a “thrilling cinematic experience that nearly levitated the theater.”

The UW Cinematheque presents the Wisconsin premiere of this awe-inspiring achievement; as an added bonus, our 3D screening will be introduced by UW Madison’s Jacques Ledoux Professor of Film Studies Emeritus David Bordwell, who has declared Goodbye to Language “the best new film I’ve seen this year, and the best 3D film I’ve ever seen.” Professor Bordwell will also lead a post-screening discussion with the audience.

The benefit screening of Goodbye to Language will screen on Thursday, November 13, 7 p.m. at:

Tickets, $20, can be purchased through the Wisconsin Film Festival’s ticketing system here.

<<THE TROUBLE WITH HARRY: Hitchcock's Surrealist Romance
A Strange Soundtrack for Your Body's Ears>>