A Glimpse at SABOTEUR 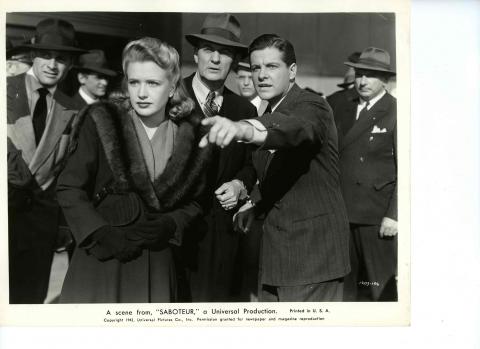 This essay on Alfred Hitchcock's Saboteur was written by UW Madison student Blake Davenport. A 35mm print of Saboteur will screen on Sunday, October 26, 2 p.m. in our Sunday Cinematheque at the Chazen 'More Hitchcock!' series.

High-octane excitement! Circus performers! Romance! A Dastardly gang of spies! Even Explosions! Although I may have led one to believe that I am simply describing one of the weekly parties thrown by the UW professors (you guys aren’t fooling us), these are just a few of the elements Alfred Hitchcock utilizes to construct his highly entertaining 1942 spy thriller Saboteur. Sandwiched between two of Hitchcock’s complex relationship dramas Suspicion (1941) and Shadow of a Doubt (1943), Saboteur finds our beloved Alfred in full action mode, showcasing early experimentation with grand locales and fast-paced plotting that undoubtedly laid the groundwork for his later masterpiece North by Northwest.

Set during the heated midst of World War II, the film almost immediately begins in disaster, as a massive fire breaks out at the airplane plant where our protagonist Barry Kane (Robert Cummings) also happens to work. When one of Barry’s friends and colleagues is killed in the fire, Barry is accused of sabotage and murder. From this point onward, the plot adheres strongly to Hitchcock’s oft-used “wrong man” formula, with Barry attempting to uncover the real perpetrators of the sabotage while simultaneously evading the police. Along his quest Barry encounters billboard model – and Hitchcock signature blonde - Patricia Martin (Priscilla Lane). Although Patricia is initially extremely way of Barry, even attempting to turn him in, she becomes crucial to the hero’s quest as they team up to take down the group of saboteurs and clear Barry’s name.

Judging from the scene that signals the fire alone, one can immediately ascertain how a certain play with style comes to the forefront in Saboteur. Although the camera is static, thick billows of black smoke pour across the frame, alerting the audience to the ominous presence of the fire and the saboteurs. This shot is signature Hitchcock, as the heightened visuals work to expose action as opposed to simple dialogue or dramatics. Another moment like this is when the camera humorously tracks in to a novel entitled “The Death of a Nobody” as the saboteurs taunt Barry. Another Hitchcock flourish is the use of memorable locales, from deserted ghost towns to New York City, a touch that allows the director a greater flexibility in how the action is staged throughout the film. As the thrilling climax takes place on the Statue of Liberty herself, its clear that the spectacle of locale is almost as important as the story.

While directorial style is, of course, a huge contributing factor to the enjoyment of Saboteur, it is the personal opinion of this author that the colorful cast of supporting characters provides just as much of the fun. As the police refuse to listen to Barry’s side of the story, the ragtag supporting give Barry the solace and assistance he needs to clear his name. Ranging from a jolly truck driver to a troupe of circus performers, the supporting players provide an oppositional stance to the sort of “fascist” manner in which the police pursue Barry. It should also be noted that Patricia’s blind uncle, portrayed by Vaughan Glaser, might be one of the coolest Hitchcock characters of all time, acting like sort of 40s version of Morpheus who can see “intangible things,” such as Barry’s innocence.

Hitchcock held a certain sort amount of disdain towards Saboteur. While the auteur was famously known for attempting to control every aspect of his pictures, the parameters surrounding this particular picture didn’t quite gel with this aesthetic. David O. Selznick, Hitchcock’s usual producing partner of the time sold the script to producers from Universal, which largely impacted the budget and casting of the film. Hitchcock himself notes in his interview with Francois Truffaut, that Priscilla Lane, “Was imposed on me as a fait accompli. She simply wasn’t the right type for a Hitchcock picture.” Further along in the conversation Hitchcock makes similar comments about overall structure as well, noting how the plot is a “mass of ideas”. However, from just a single viewing of Saboteur, its quite clear that this was just Hitchcock’s complaints are a reflection of his usual perfectionism.  The film is very entertaining, suspenseful, and action-packed, and while Hitchcock may not have preferred his female lead, Cummings and Lane turn in very good performances that carry the narrative effectively. Retaining excellent use of setting and one of the most memorable Hitchcock climaxes of all-time, Saboteur is an exciting thriller that easily ranks as a must see for anyone looking to spend a little more time in the world of Hitchcock

<<A Strange Soundtrack for Your Body's Ears
Sights Unseen in THE WICKER MAN: FINAL CUT>>