The Unsettling Audacity of SEVEN BEAUTIES 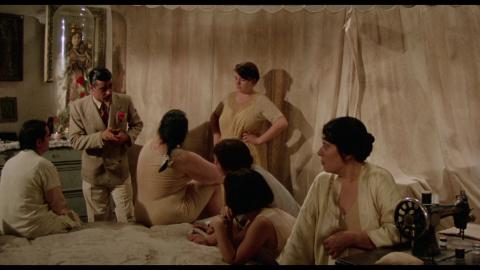 These notes on Lina Wertmüller's Seven Beauties (Pasqualino Settebellezze ) were written by John Bennett, UW Cinematheque Project Assistant and Programmer, and PhD Candidate in the Department of Communication Arts at UW Madison. A restored DCP of Seven Beauties will screen on Friday, October 28 at 7 p.m. in the Cinematheque's regular venue, 4070 Vilas Hall, 821 University Ave. Admission is free!

Seven Beauties, the 1975 chef d’oeuvre of Italian auteur Lina Wertmüller, opens with a montage of World War II archival footage. The very first image of the film depicts Mussolini beaming as he warmly shakes hands with Hitler. The montage goes on to intercut images of the former strutting about his famous balcony and the later screaming into a microphone like a monstrous baby. Interspersed between them are images of plane crashes, building collapses, and fiery explosions. On the soundtrack, such images are not accompanied by, say, Barber’s Adagio for Strings or the second movement of Beethoven’s Seventh Symphony or other such compositions that we have grown accustomed to hear as portentous anthems of the memory of war. Instead, we hear on the soundtrack the alt-rock strains of Enzo Jannacci’s “Quelli che…”, a song that is by turns mischievously playful, politically ambiguous, and strangely sad. There could be no better opening for Seven Beauties, a film that miraculously blends rebellious humor and ghastly horror to show one man’s frantic attempts to survive in a Europe torn apart by fascism and war.

This man is Pasqualino (brilliantly played by Giancarlo Giannini, Wertmüller’s expressive muse), a small time Neapolitan thug. When we first meet Pasqualino, he wanders though a dark and foggy German forest after having deserted the Italian army. He muses on a murder he committed in Naples—the victim being the man who coerced his older sister into prostitution—before he is apprehended by the German authorities. In the hell of a Nazi POW camp, Pasqualino determines that his best odds for survival involve seducing the icy, cruel female Commandant of the camp (Shirley Stoler, best known for her star turn in the cult classic The Honeymoon Killers (1970)) even as one fellow prisoner (Fernando Rey, fresh off several Buñuel collaborations as well as his villainous turn in The French Connection (1971)) whispers demoralizing aphorisms in his ear. Alternating back and forth in time, Seven Beauties charts Pasqualino’s prewar and postwar tribulations, relaying his desperate bids for survival in a milieu where human life is unspeakably cheap.

The major achievement of Seven Beauties is its ability to nimbly balance tones that are both exaggeratedly cartoonish and devastatingly grim. Wertmüller’s chief means of achieving this effect is through seesawing back and forth in time, intercutting two lines of action. In one, Pasqualino reckons with his crime and his sisters’ honor in the light and color of Naples; in the other, he games out how to best seduce the Commandant amid the unrelenting violence of the dim German camp. The presentation of two tonally disparate lines of action allows Wertmüller to cut from the prison scenes just as their darkness threatens to engulf the film, just as she can cut away from the Naples sequences right as they teeter on falling into farce.

Subtle stylistic choices help to enhance the incongruence of these tones. Wertmüller revels in the supreme expressiveness of eyes shot in close up. In the Naples sequences, Pasqualino’s eyes glimmer with lively fantasies of revenge against the man who compromised his family’s honor. The scene depicting his trial is remarkably devoid of dialogue; ardent looks of longing and regret shot in extreme close up propel the narrative better than sound could. In the POW camp, conversely, the extreme close ups reveal eyes in the throes of fatigue and fear, or, in the case of the Commandant, eyes betraying a terrible, indifferent cruelty. Wertmüller even makes Naples and Germany sound different: note how the film’s sound design gives Pasqualino’s shoes a comic squeak in Naples, a sound that is replaced by somber, echoing footsteps in the German prison. Similarly, the energetic chatter of Pasqualino’s sisters that dominates many of the Naples sequences yields to the repeated, mournful knell of a distant whistle somewhere outside of the infernal camp.

These two tones converge in the pivotal seduction scene between Pasqualino and the monstrous Commandant. The hot red lighting of a Naples cabaret and the steely gray of Germany converge into a sickly green light that washes over the office and cruel countenance of the Commandant. Pasqualino’s frantic movements as he desperately attempts to romance the Commandant have all the frenetic fleetness of his swaggering pre-war attitude and all the wide-eyed existential panic he experiences once thrust into the war. Indeed, this scene—dense with both humor and horror—serves as the keystone of this intricately architected film, synthesizing as it does Wertmüller’s preoccupation with honor, sex, power, and survival.

Audiences may be struck that Pasqualino lacks the traces of heroism or gallantry that we’re accustomed to seeing in war film protagonists. In fact, he often behaves nearly as violently and cruelly as his eventual German captors. From the outset of the film, Wertmüller takes pains to convey Pasqualino’s wily, less-than-honorable opportunism when we learn that he has pilfered bandages from a dead man in order to fake a war injury. He does little to redeem himself from there. In Naples, he violently manhandles his sister, Concettina (played by Wertmüller favorite Elena Fiore) and has no scruples about his mob connections. Later in the film, he professes a casual, unstudied admiration for Mussolini’s authoritarianism. Most disturbingly, he proves to be all too ready to commit sexual assault when he is held in an asylum after pleading insanity to lighten his sentence. With Pasqualino, Wertmüller and Giannini don’t attempt to present a sympathetic hero on whom we can pin our hope for humanity in times of crisis. Instead, they flesh out a psychologically complete character, however despicable he may be, in order to show how war profoundly transforms even the least noble among us. In Pasqualino’s final, weary gaze into the camera, we can see how a world of horrors wore down his wide-eyed, scrappy, rough-hewn swagger into something more unfathomably sad. Horrible people, Seven Beauties seems to argue, are not immune or inured to horrible events.

Seven Beauties is a rich, bold work in and of itself, but it also occupies a unique position in film history. Throughout the early 70s, Wertmüller had a hot streak with The Seduction of Mimi (1972), Love and Anarchy (1973), and Swept Away (1974)—films whose sex-as-power narratives appealed to a movie-hungry intelligentsia with the tenets of second-wave feminism ringing in their ears. Her films were by no means met without controversy, but this very controversy helped to make her films buzzy theatrical events. By the time Seven Beauties was released internationally, Wertmüller was at the peak of her popularity; she earned the remarkable distinction of becoming the first female director to be nominated for a directing Oscar for Seven Beauties. In a testament to how large Wertmüller loomed in the 70s film scene, Laraine Newman even donned a pair of the director’s trademark white-framed glasses to parody her exuberant, exaggerated manner on an episode of Saturday Night Live. Nearly half a century later, Wertmüller’s work may not be as canonized as that of, say, Agnès Varda or Chantal Akerman, but that should not take away from her singularly playful, libidinous, unsettling, and audacious contributions to the art form.