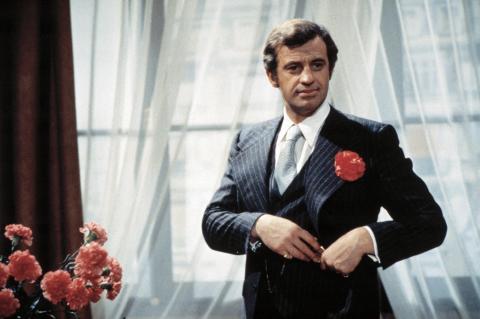 These notes on Alain Resnais' Stavisky were written by John Bennett, PhD candidate in UW Madison's Department of Communication Arts. The Cinematheque's series tribute to the late Jean-Paul Belmondo concludes with a screening of Stavisky on Saturday, April 23 at 7 p.m. in the Cinematheque's regular venue, 4070 Vilas Hall, 821 University Avenue. Admission is free!

France, 1934: fiercely unhappy with the left-of-center government, a group of right-wing organizations riot in Paris’s Place de la Concorde, creating the biggest political crisis of the French Third Republic outside of World War I. With fascism firmly established in Mussolini’s Italy and Hitler’s Germany and on the rise in a politically unstable Spain, the riots took on a particularly sinister quality. The cause of the riots? In part, France’s slow recovery from the global depression. But a more immediate cause was the grand scandale of the Stavisky Affair, the intrigue of which makes up the story of Alain Resnais’ 1974 period piece, Stavisky. Starring popular French actor Jean-Paul Belmondo and overflowing with glamorous architecture and objets d’art, Stavisky charts the exploits of Serge Alexandre Stavisky, the Ukraine-born embezzler who charmed his way into the bosom of France’s political and cultural elite. With the help of powerful friends, Stavisky maintained ill-begotten business ventures in banks, stables, theaters, newspapers, etc., none of which turned much of a profit while the title character spends lavish sums on his wife and loses fistfuls of francs at the baccarat tables of Biarritz. Hounding his trail is Inspecteur Bonny, a man who comes to realize that if he brings down Stavisky, he can bring down high profile aristocrats, politicians, and police chiefs along with him. Stavisky intertwines this story with a subplot about another immigrant under police scrutiny living in France: Soviet revolutionary Leon Trotsky. Dense with political intrigue, Stavisky manages to simultaneously charm and unsettle an audience just as its eponymous protagonist charmed–before unsettling–swaths of France.

Stavisky marks something of a middle period in the careers of both Resnais and Belmondo. Both initially rose to prominence in 1959/1960, the headiest years of the French New Wave. Resnais’ bold and experimental direction in Hiroshima mon amour (1959) and Belmondo’s brash and charismatic performance in Godard’s Breathless (1960) both typified the youthful experimentation that characterized many New Wave films. Fifteen years later, Stavisky typified the legacy of New Wave filmmaking in a new way. Resnais’ film, with its depiction of a historical megalomaniac, belongs to a cycle of mid-career films by New Wave cinéastes that treat the political turmoil of the 30s and 40s with deep cynicism. Films like Melville’s Army of Shadows (1969), Malle’s Lacombe, Lucien (1974), Losey’s Mr. Klein (1976), and Truffaut’s The Last Metro (1980) all feature characters who navigate a Nazi-menaced France with a measure of cold opportunism. These films, made by New Wave directors or starring New Wave actors, eschew grand narratives of heroism to explore how extreme circumstances place complicated constraints on protagonists. They also invite a certain degree of social commentary; at a climactic point in Resnais’ film, attention is gravely drawn to Stavisky’s Jewish identity, underscoring the rampant antisemitism of European high society of the 1930s.

Stavisky was Resnais’ sixth feature, after Hiroshima, Mon Amour (1959), Last Year at Marienbad (1961), Muriel (1963), The War is Over (1966), and Je t’aime, je t’aime (1968). All of these films feature a thematic preoccupation with the nature of memory and a stylistic preoccupation with disorienting editing that scrambles time and space. Stavisky squarely continues these trends. The film’s loving attention to the look and feel of France’s interwar years reveals a fascination with historical memory, and memory as a psychological process is reflected in some of the film’s flashback sequences (such as the one detailing Stavisky’s first arrest in the middle of a dinner party). Though the film’s story is largely linear, Resnais subtly plays with spatial and temporal editing. Some cuts throughout the film briefly and disorientingly flash forward to depict peripheral characters testifying against Stavisky at a Parliamentary hearing. These shots, consistently executed in medium close ups, deny the viewer clear access to the time and place in which they occur until late in the film. Another flashforward late in the film curiously reveals Stavisky’s fate in five sweeping shots a full twenty minutes before the exact dramatic context of those shots is fully revealed. Stavisky may tell a more direct story than, say, Marienbad, but it is nevertheless replete with the experimental touches for which Resnais was renowned.

But despite its continuance of some of Resnais’ storytelling preoccupations, Stavisky also represents new directions for the director. Whereas Hiroshima and Marienbad presented ambiguous characters with ambiguous experiences and motives, Stavisky fleshes out a psychologically complete and consistent main character. Through his own actions and the dialogue of other characters, we understand the grandiose tragedy of Stavisky’s unstable approach to his ersatz endeavors. These new directions extend to the look of the film as well. The opulence of Jacques Saulnier’s production design recalls the stately splendor of his work on Marienbad. Yet Stavisky enlivens the ghostly, frozen qualities of Marienbad’s set ornamentation with a riot of color and light. The impossibly deep reds of roses and carnations or berries embedded in creme fraiche burn languorously in Resnais’ compositions amid the glamor of the late Third Republic architecture. In one beautiful shot, a small drop of blood adds a stunning dash of red on a blazing white background. One scene set in a restaurant is bathed in deep red as refracted light dances across characters’ faces. Throughout the film, pinpoints of light winkingly glint off the corners of polished dinnerware, glimmering jewels, and vintage cars. In this sense, Stavisky’s narrative coherence and playful visual liveliness contrast sharply from the haunted stillness of Hiroshima and Marienbad as well as the studied drabness of Muriel.

In crafting his story, Resnais had help from some legendary collaborators. In the leading role, Jean-Paul Belmondo (who passed away in 2021) deploys his customary caddish charisma. Playing the affable and ignorant Baron Raoul, legendary French actor Charles Boyer (in his penultimate screen performance) steals nearly every scene he appears in by dint of his palpable, debonair joie de vivre. Cinematographer Sacha Vierny makes the film’s images glow and twinkle warmly, offering an ironic counterpoint to the mounting chaos that consumes Stavisky’s life. And of course, the film boasts the contributions of a legendary musical talent: Steven Sondheim (whom we also lost in 2021). Like Resnais, Sondheim often explored the dark nature of memory, as he did in musicals like Follies and Sweeney Todd (some deleted songs written for Follies were resuscitated for the Stavisky score). A master of historical pastiche, Sondheim’s score replicates the breeziness of Charles Trenet’s easy, bouncy popular music of the 30s and 40s while often furnishing agitato undertones that betray the untenability of Stavisky’s elaborate lifestyle. At other times, Sondheim’s score swells and crescendos at dramatic moments with an auditory lushness that pairs perfectly with extravagantly adorned mise-en-scène. All of these contributions help Resnais tell the story of the Stavisky Affair with supreme elegance and assurance.