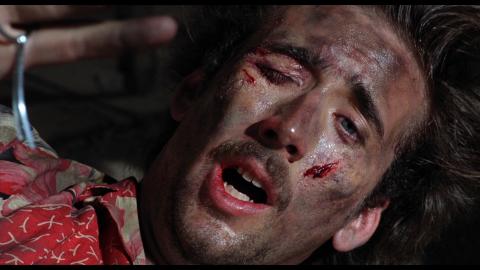 These notes on Raising Arizona were written by Lance St. Laurent, graduate student in UW Madison's Department of Communication Arts. A 35mm print of Raising Arizona will screen as part of our "Age of Cage" series on Friday, April 29 at 7 p.m. in our regular venue, 4070 Vilas Hall, 821 University Ave. Admission is Free.

The opening sequence of Raising Arizona (1987) remains one of the most audacious rebukes of the sophomore slump ever committed to film. After the success of Blood Simple (1984), the two-headed director known as the Coen brothers could have carved out an entire career of stylish crime thrillers, becoming a somewhat quirky alternative to the likes of Martin Scorsese or Michael Mann. Indeed, they have at times made films in this mold, films like Miller’s Crossing (1990) or their Best Picture winning adaptation of No Country for Old Men (2007). It was Raising Arizona, though, and, in particular, its locomotive of an opening sequence, that really told the world who the Coen brothers were as filmmakers. If Blood Simple announced the pair as a duo of uncommon talent, it was Raising Arizona that showed their formal ambition in full bloom and revealed their love of the manic and eccentric.

Over the course of an eleven-minute expository montage, we are introduced to two-bit criminal H.I.—pronounced “Hi”— McDonough (Nicolas Cage), a compulsive recidivist whose romanticized voice-over narration reveals the soul of a poet, and his unlikely paramour Ed (Holly Hunter), a police officer whose prickly exterior barely conceals a soft, sensitive heart. After a courtship that plays out of over the course of several arrests, H.I. and Ed marry and start trying to “have themselves a critter” as H.I. puts it, only to find that “biology and the prejudices of others” prevent them from doing so. Desperate and inspired by the story of a well-off local family birthing quintuplets (“They’ve got more than they can handle!”), H.I. and Ed set out to steal themselves a baby and start the family of their dreams no matter what it takes. It’s only after this furious flurry of set-up that Carter Burwell’s iconic yodel-infused score swells and we get a title card that lasts just long enough for us to catch our breath.

In a filmography defined by oddball characters over their heads, there still may be no Coen protagonist as instantly compelling as H.I., and in Nicolas Cage the Coens found the ultimate vessel for this bundle of contradictions. Like the bird tattoo on his arm (a tattoo shared by this writer), he is a cartoon made flesh, constantly running, screaming, and flailing with an energy that is matched by cinematographer Barry Sonnenfeld’s (later a director of some note himself) playfully mobile camerawork. And yet, Cage balances H.I.’s propensity for Looney Tunes-style antics with a genuine sense of pathos and a palpable love for his new bride, and even as the film crescendos with ever more ludicrous antics, Cage never loses sight of H.I.’s fundamental humanity. This was not Cage’s first lead performance, but this was certainly one of the first in which his singular eccentricity was harnessed by filmmakers whose vision was as off-beat as his own.

Furthermore, Cage is matched by Holly Hunter—improbably giving this incredible performance the same year as her Oscar-nominated role in Broadcast News (James L. Brooks)—who similarly grants Ed a rich sense of interiority to accompany her single-minded pursuit of a child and her occasional violent crying fits. Though Hunter has played variations of the feisty Southern spitfire dozens of times throughout her career, few other performances have leveraged her forceful energy, tiny frame, and unmistakable voice to such hilarious ends. Despite her intensity, though, Ed’s relentless desire for a child never feels pathetic or delusional. She is foolhardy and obsessed but also recognizably, even painfully, human.

Since the release of Raising Arizona, the films of the Coens have often drifted into the realms of the absurd and the silly, and several of their later films, such as The Big Lebowski (1998) and Burn After Reading (2008), have returned to a purely comic mode. For me, though, it is always Raising Arizona that I return to. It is pound for pound their funniest film, and indeed one of the finest American comedies ever made. The Coens are renowned for their formal inventiveness and their razor-sharp wit, and Raising Arizona has both in spades, but its humanism and genuine warmth is somewhat unique in the oft-unforgiving universes the brothers’ devise. It is sweet but never saccharine and silly without feeling slight, a perfect ode to the scruffy charms of unruly underdogs made by a pair of filmmakers who were still unruly underdogs themselves. The Coen brothers have arguably made more technically accomplished and thematically rich films since Raising Arizona, but to me none are more imprinted with the irrepressible and unkempt spirit of youthful enthusiasm, both in front of and behind the camera.

<<STAVISKY: Crafting a Con Man
The In-Your-Face Kitsch and Gore of FLESH FOR FRANKENSTEIN 3-D>>