Friendship and Blue Jeans: THE SISTERHOOD OF THE TRAVELING PANTS 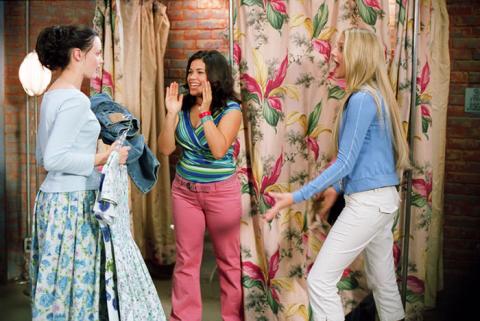 THE SISTERHOOD OF THE TRAVELING PANTS

These notes on Ken Kwapis’s The Sisterhood of the Traveling Pants were written by Ashton Leach, graduate student in UW Madison's Department of Communication Arts. A 35mm print of Sisterhood will be screening on Thursday, November 11, at the Marquee Theater at Union South. After the screening, director Ken Kwapis will join us in person to answer audience questions. This screening is a collaboration between the UW Cinematheque and WUD Film.

Tears, laughter, love. These are the key components of Ken Kwapis' The Sisterhood of the Traveling Pants. Based on the 2001 Ann Brashares book by the same name, The Sisterhood of the Traveling Pants revels in the complexities of teenage girlhood, intertwining comedy and drama seamlessly as the narrative follows four girls during their first summer apart as they spread out across the world. The sixteen-year-olds that comprise the Sisterhood of the title question the importance of love, especially as they approach it in a way they have never done before. Carmen (America Ferrera) seeks affection from her father as cultural differences leave her feeling othered in his new WASP family in South Carolina. Lena (Alexis Bledel) finds a boyfriend who is seen as a family enemy by the relatives she's visiting in Greece. After the death of her mother, Bridget (Blake Lively) confronts her feelings of depression, loss, and shame while at soccer camp in Mexico. Tibby (Amber Tamblyn) makes new friends with a younger girl while working through the summer in Maryland.

Director Ken Kwapis is best known for his contributions to sitcoms, including Freaks and Geeks, Malcolm in the Middle, and most notably, The Office. Kwapis' film offers a look at the connection friendship creates beyond the differences of size, class, and distance and the director excels at crafting spaces that leave the four protagonists vulnerable while also showing their fortitude. Sisterhood remains a cornerstone of late-night sleepovers, and as America Ferrera, Blake Lively, Amber Tamblyn, and Alexis Bledel continue to dominate both small and large screens, Sisterhood stays in conversation as an important achievement in their early careers.

The way Kwapis represents the intensity of change on the screen leaves the viewer reflecting on the changes that cause the character shifts in the four protagonists. From Greece to South Carolina, from Mexico to Maryland, the girls send the pants to each other seemingly when they need them most. The pants come to represent the confidence that is gained through companionship, giving each of the girls the encouragement to take the risks in new places where their friends aren't. The pants, in actuality, get little screen time, and aren't a particularly memorable aspect of the movie. This just goes to show that the pants, which also represent the affection between the four friends, were never really important, and the cost of shipping the jeans all over the world is well worth the price for friendship.

Four girls, four vastly different backgrounds, one hip-hugging pair of denim jeans that represent much more than a fashion trend of 2005. Sisterhood digs into the difficulty of change: each girl realizes that what they wanted is much more complicated than they ever expected and the characters offer so much more beyond the usual trite depiction of bland and vapid teenagers. Kwapis' film instead focuses on the struggles that many girls will have to face during this sensitive time of immense metamorphosis. The dramatic actions taken by each of the girls might seem cliched on the surface, but the film sensitively reveals the emotional turmoil that lead them to their actions, giving weight to their experiences and pain. That is why Sisterhood remains a staple in the library of teenage girlhood cinema.

Sisterhood provides an honest portrayal of finding oneself with a little help from your friends, even when they are not physically there. The familiarity of Sisterhood is moving, painfully relatable, and guaranteed to elicit a plethora of emotions. Though the girls are not stereotypes, the performances and writing make it possible for anyone watching the film to sympathize with the girls. Sisterhood leaves the audience reflecting upon the pressures of teenagerhood and acts as a reminder that chosen family is just as valuable as any blood relation. Sisterhood of the Traveling Pants will undoubtedly live on in the pantheon of teenage girlhood films, but it leaves all its viewers, regardless of age, knowing that perhaps “being happy isn't having everything in your life be perfect. Maybe it's about stringing together all the little things, like wearing these pants.”

<<Cinematalk Podcast: J.J. Murphy on THE FLORIDA PROJECT
Please Give to UW Cinematheque>>