Please Give to UW Cinematheque 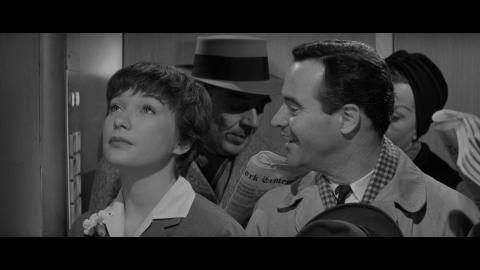 THE APARTMENT screens in a new 4K Restoration on December 17

As we near the end of 2021, we are taking a moment to reflect on what the Cinematheque has been able to provide for our audiences during this unique year.

The year began much as 2020 had ended, with our home venue of 4070 Vilas Hall shuttered due to Covid 19 health and safety concerns. Cinematheque continued our Cinematheque at Home series of films available to view online, as well as regular installments of our Cinematalk podcast. Highlights included the latest works from Rodney Ascher (A Glitch in the Matrix), Nicolas Pareda (Fauna) along with podcast interviews with the directors; an in-depth discussion with interdisciplinary artist-in-residence, Litza Bixler and at home screenings of The World’s End featuring her choreography, and Fritz Lang’s Metropolis, a profound influence on Bixler’s work. We also presented free online screenings of a generous slate of bold new films including Shiva Baby, Just Don’t Think I’ll Scream, and There Are Not Thirty-Six Ways of Showing a Man Getting on a Horse. In April we took deep dives into the films of independent Midwestern filmmakers Frank V. Ross and Emir Cakaroz with multiple film screenings and companion podcasts.

Cinematheque made a much-anticipated return to 4070 Vilas Hall at the end of June with six weeks of free screenings. Starting with Leo McCarey’s classic tearjerker Make Way for Tomorrow and ending with James Cameron’s summer blockbuster spectacular, Aliens, we presented an exciting, typically eclectic slate of films, everything from Where’s Poppa? to Pepe Le Moko; and from Ruggles of Red Gap to The Lunchbox. We also celebrated the Charles Bronson centennial with a handful of his best films, ending with the singular From Noon Till Three and a podcast discussion with writer/director Dan Gilroy, whose father, Frank Gilroy, wrote and directed From Noon.

Fall kicked off with Roy Andersson’s About Endlessness and a 35mm screening of Quentin Tarantino’s Once Upon a Time…in Hollywood and proceeded with well-attended screenings of Rashomon, New Order, and a sneak preview of Dear Evan Hansen. October brought a tribute to the trailblazing career of Joan Micklin Silver, the return of in-person guests to the Cinematheque in the form of Brandon Colvin, presenting his latest, A Dim Valley, and archivist & UW alum, Olivia Babler, presenting the recently discovered, long lost silent feature, The First Degree, featuring live piano by David Drazin. In November, we hosted acclaimed writer/director Ken Kwapis, here to present special 35mm screenings of his modern- day classic, The Sisterhood of the Traveling Pants, and a personal favorite, American Graffiti.

Our programming goes on hiatus mid-December as we prepare for an exciting 2022 Cinematheque season that will begin in late January. Our free film programming would not be possible without the generous support of individuals like you. In the spirit of this season of giving, please donate here to the UW Cinematheque. Our organization continues to take the lead in keeping cinema culture and cinema talk alive and well in Madison during this uncertain time for movie-going.

<<Friendship and Blue Jeans: THE SISTERHOOD OF THE TRAVELING PANTS
The Lovely, Lonely World of THE APARTMENT>>