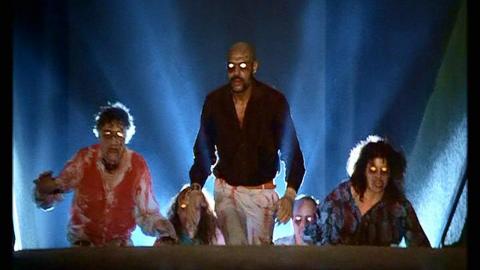 While the Cinematheque’s regular cinema screening spaces remained indefinitely closed, our series of free, view-at-home movies continues over this Halloween weekend with Demons a 1980s cult horror movie that, among other things, plays with the notion of movie theaters as a source for viral infection…and demonic possession.

DEMONS (Italy, 1985, 88 min.) “Demons is Italy’s hallucinogenic meta-commentary on its own berserk splatter movies of the ‘80s. The film takes place in a theater showing a berserk splatter movie from Italy. The movie-within-a-movie features a silver monster mask that transforms its wearer into a demon. The same mask is on display in the lobby. In fact, on her way inside, a hooker cut herself on the mask. Before long, the prostitute’s wound spews goo, and she grotesquely mutates into a demon a lot like the one up on screen. From there, Demons is an electrically kinetic orgy of body-breaking and gore-spraying, as one patron after another gets bitten and infected, flailing wildly in some truly awesome monster makeup” (Mike McPadden, Heavy Metal Movies).

Filmed in Berlin on brilliantly designed sets, Demons is produced and co-written by Italian horror maestro Dario Argento, in collaboration with director Lamberto Bava, son of the Godfather of Italian horror, Mario Bava. The soundtrack for this fun, stylish, and deliriously over-the-top scarefest features a pulsating score from Goblin’s Claudio Simonetti and a plethora of pop, rock, and metal songs from artists like Saxon, Rick Springfield, Go West, Billy Idol, and Pretty Maids.

From October 29 through November 1 only, the Cinematheque is offering unlimited home viewing of the original, uncut version of Demons. To receive access, simply send an email to info@cinema.wisc.edu, and make sure to include the word DEMONS in the subject line.

Another Halloween treat, Xia Magnus' Sanzaru, is also still available for free viewing-at-home through November 5. Learn how here on our blog.

On a new episode of our Cinematalk podcast, the Cinematheque's Jim Healy talks Demons with writer and cinephile Mike McPadden. McPadden is the author of two positively essential film guides, the recently published Teen Movie Hell and, now in its third printing, Heavy Metal Movies, a compendium that describes itself as “Guitar Barbarians, Mutant Bimbos & Cult Zombies Amok in the 666 Most Ear and Eye ripping big scream films ever!” McPadden has provided commentary tracks for several home video releases on blu-ray, and he’s also the co-host of two other podcasts we highly recommend, Crackpot Cinema, co-presented with TV writer Aaron Lee, and 70 Movies We Saw in the 70s, co-hosted with the Cinematheque’s Ben Reiser.