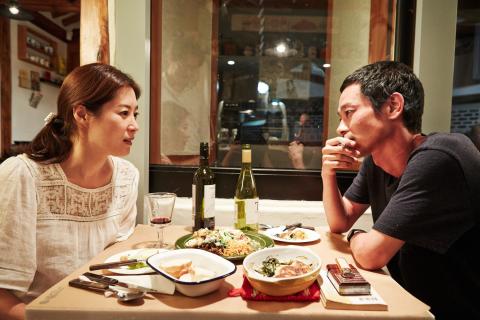 The UW Cinematheque's free series of view-at-home movies continues this week with a marvelously inventive gem from one of South Korea's most acclaimed and prolific artists: Hong Sang-soo's Hill of Freedom.

HILL OF FREEDOM (2014, South Korea, 67 minutes, English and Korean with English subtitles)  “Time is not a real thing, like your body, my body, or this table,” a Japanese man confides in English to a Korean woman after a few too many drinks. “Our brain makes up our mindframe of time continuity: past, present, future. I think you don’t have to experience life like that, necessarily, as a species. But at the end, we cannot escape from this frame of mind, because our brain evolved this way. I don’t know why.” Across 24 feature films in as many years, South Korean writer/director Hong Sang-soo has continually experimented with the possibilities of cinematic time, bending and breaking its rules in an unflashy, irresolvable manner far from the self-seriousness of Christopher Nolan—these are films to inhabit rather than unlock. His filmography is riddled with bifurcated structures, repeated scenes, dreams, flashbacks, and do-overs, never simply proceeding from points A to B without exploring the rest of the alphabet first. Packing its mind-bending chronology into a fleet 67 minutes, Hill of Freedom’s deceptively simple story follows a Japanese man’s return to Seoul to track down a lost love, who is nowhere to be found. Although relayed through multiple narrators, a stack of out-of-order letters, and characters who are frequently drunk and rarely speaking their native languages, Hill of Freedom is at its core a funny, tender, and modest exploration about the misunderstandings between men and women. Indeed, it is characteristic of Hong’s unpretentious humor and persistent jabs at male vanity that the woman’s response to the man’s drunken pontifications on the unreality of time is an eye-rolling, “Very interesting, tell me about it later, okay?”

“A masterwork. Achieves a complexity akin to the grand historical meditations of Alain Resnais. Ingeniously constructed. I’ve watched it three times forwards and one time backwards and I feel as if I’m just beginning to get the hang of it” (Richard Brody, The New Yorker).

The Cinematheque is offering a limited number of opportunities to view Hill of Freedom at home for free. To get your access to the movie, simply send an email to info@cinema.wisc.edu and remember to write the word HILL in the subject header or in the first line of the email. This presentation of Hill of Freedom is brought to you in part with the support of UW Madison Center for East Asian Studies.

And, on our Cinematalk podcast this week, we are delighted to be joined by the great film scholar, author, and teacher David Bordwell, Jacques Ledoux Professor of Film Studies right here at the University of Wisconsin-Madison. Professor Bordwell has been following Hong Sang-soo since his very first film, and his discussion with the Cinematheque's Mike King touches on Hong’s filmography as a whole, Hill of Freedom in particular, and Hong’s visit to the 2001 Wisconsin Film Festival right here in Madison. Scroll down to listen to that conversation.  You can also listen to Cinematalk on Soundcloud or subscribe through Apple Podcasts.