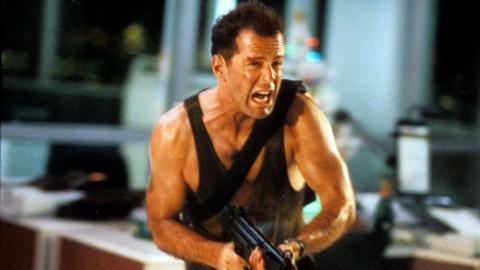 The following notes on Die Hard (1988) were written by David Vanden Bossche, PhD student in UW-Madison’s Department of Communication Arts and co-organizer of the Antwerp Summer Film School. A 35mm print of Die Hard will screen at 2 p.m. on December 15 at the Chazen Museum of Art, preceded by Tex Avery's short animation The Peachy Cobbler (1950). This program concludes our series of films from the collection of the Chicago Film Society, and our 2019 Cinematheque programming year.

Broadly (and rightfully) considered to be one of the greatest achievements in action film history, John McTiernan’s Die Hard still lives up to its reputation after three decades and the 35mm print the Cinematheque screens December 15th will still “blow you through the back wall of the theatre,” as the 1988 tagline promised. Die Hard is the film equivalent of a perfectly oiled and streamlined machine: a film in which every shot, camera movement and bravura action sequence is pitched to absolute perfection. Few are the cinematic spectacles that offer the viewer this much sheer excitement and cinematographic refinement at the same time.

Much like composer Michael Kamen’s masterful score spins variations on Beethoven’s Ninth Symphony and the "Ode to Joy", Die Hard’s plot is reduced to virtuosic variations on the absolute bare essentials. Its basic template: a group of terrorists locks down a Los Angeles high-rise on Christmas Eve, with one man spoiling their perfectly executed plan – a lone policeman who isn’t even supposed to be there and is forced into a deadly game of hide-and-seek as he tries to thwart the group’s scheme.

Portraying the stubborn NYC cop John McClane, Bruce Willis was propelled into instant superstardom with this 1988 outing, being until then mostly known for playing Cybill Shepherd’s partner and will-they-or-won’t-they lover on the hit series Moonlighting. While Willis undeniably carries the film, he is all but upstaged by a terrific performance by the late Alan Rickman as Hans Gruber, the sardonic and charismatic leader of the gang of well-organized terrorists. True to the Alfred Hitchcock adage “the more successful the villain, the more successful the picture,” Gruber is a man who puts style above all else, though he never hesitates to switch from being deceivingly charming to absolutely ruthless when the situation calls for it. “It would be a pity to ruin that suit Mr. Takagi,” he tells the CEO of the Japanese company that has its offices in the building, seconds before shooting him in the head — obviously without so much as staining the said suit.

The true star of Die Hard, however, is director John McTiernan, who built his reputation on only two previous films – the taut little thriller Nomads (1986) and the tremendous Schwarzenegger-vehicle Predator (1987) – and delivered with Die Hard a film that would define its genre for years to come. Its enduring legacy is no more obvious than in the numerous high concept pitches that followed, referred to as “Die Hard on a plane” (Air Force One), “Die Hard on a bus” (Speed, directed by Die Hard’s cinematographer Jan De Bont), or any other new variation one could come up with.

The film’s greatest achievement is to be found in the way it integrates its high-rise setting into the action (something McTiernan had done before with the jungle setting in Predator). From the very start, this is a movie with a keen eye for the use of architecture: watch for a dazzling overhead shot when a police car circles the building’s courtyard. The overwhelming, powerfully composed wide-screen ‘tableaux’ manage to turn the shafts and corridors of the postmodern building into a veritable character itself. The director’s crafty use of wide-angle lenses and his incredible flair for cinematic staging are on full display in the brilliantly choreographed shot of the opening of the vault, which balances Rickman to the extreme left of the image and whiz-kid Theo (Clarence Gilyard) to the right as the doors open mid-frame to Kamen’s triumphant score. McTiernan lends to Die Hard a level of cinematic finesse that few contemporary action directors could match.

Patrick Duynslaegher, Belgian’s most prolific film critic for four decades and current artistic director for the Ghent Film Festival, called Die Hard in 1988 the “absolute ne plus ultra in high tech action cinema,” an endorsement I still wholeheartedly subscribe to for this riveting masterpiece.

I will conclude with a salient tidbit of Die Hard trivia: Ronald Reagan used to have an office in the L.A. building that was used for the Nakatomi Plaza – an ironic fact, as this lean and mean cop thriller became an icon of sorts for the Reagan-era action film.