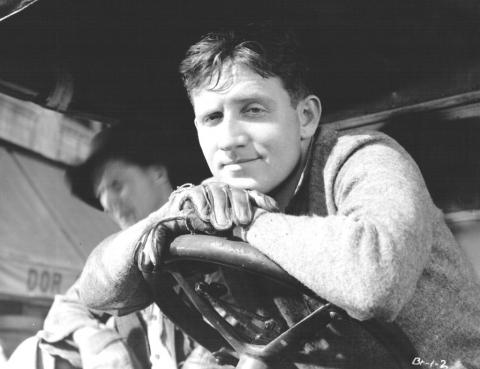 These notes on Rowland Brown's Quick Millions were written by Casey Long, PhD candidate in UW-Madison’s Department of Communication Arts. A newly restored 4K DCP of Quick Millions will screen as part of a double feature of Brown's work at Fox Film Corporation on Friday, December 6 at 7 p.m. The double feature, part of our series tribute to Fox, will also include an 8:30 p.m. screening of Brown's notoriously racy pre-code masterpiece, Blood Money (1933). Both films screen in our regular venue, 4070 Vilas, 821 University Ave. Admission is Free!

Does “Bugs” Raymond have brains? This is the question that arises again and again throughout the 1931 Fox film, Quick Millions. It is what haunts our protagonist, played by Spencer Tracy, in his ascension from truck driver to mob boss; from rags to riches; from the city street to the top of the tower. Bugs seeks to prove that it is his ‘bean’ that has gained him success rather than illicit dealings and thuggish behavior. A secondary question inevitably stems from the first: does it even matter?

This was Rowland Brown’s first film as a director. He was previously a newspaper reporter and contract writer for Fox. Rumors about his drinking and connections to real-world gangsters, coupled with his tendency to abandon films midway through production led to a lean but promising body of work. He would go on to direct only three more pictures: Hell’s Highway (1932), Blood Money (1933), and The Devil is a Sissy (1936). He would continue to write for film sporadically, most notably nominated by the Academy for Best Original Story on Angels with Dirty Faces (1938).

Brown’s direction reveals a keen eye for how to use light, framing and staging to allude to violence without explicitly showing the act on screen. These cinematographic decisions obscure the truly bad aspects of Bugs’ nature and instead encourage the viewer to see him as a man caught between two worlds. He is split between two women: devoted Daisy and wealthy Dorothy; and two organizations: his original street-gang and the industrialists at the top. Buildings explode, fires are set, people are shot; but Bugs manages to distance himself from the very acts that permit his lavish lifestyle. The viewer never sees Bugs commit an act of violence, only the results of his decision-making and orders to his henchmen. One low-angle shot of a troublesome newspaper reporter frames only his slippered feet as we hear the clacking of a typewriter. His assassin is similarly unseen, committing the act as a mere shadow on the wall. Brown leaves it to the viewer to make connections, draw conclusions, and fill in the gaps; in this way permitting his audience to gain a deeper sense of the seedy Depression Era underworld that included both streetwise racketeers and the corrupt ultra-rich.

According to Variety, Brown received a bonus of $1,000 for “continuity and cutting.” The story is told elliptically through quickly-cut vignettes that trace Bugs’ underworld career from 1925 to 1931. A lion’s share of these segments include short, snappy one-liners. A 1936 New York Times article on early sound films praises Quick Millions as contributing to a new cinematic style that cut down on dialogue: “The rapid rhythm of Quick Million ’s continuity was built up from short scenes; the dialogue was correspondingly laconic. Each scene quietly thrust home a point of character or plot—and stopped.” Brown economically highlights dialect and linguistic differences in nearly every scene. For example, Tracy’s character will routinely translate words for his lower-class crew members. At one point, he deciphers the word ‘prestige’ to his right-hand man, Jimmy.

BUGS: You know going around with her gives me a lot of prestige.

JIMMY: A lot of what?

Bugs is the gangster equivalent of the Western genre’s “man who knows Indians”—a conduit between two separate cultures; a tragic figure who understands both sides but cannot fully join either of them. Born in Milwaukee, Wisconsin in 1900, Spencer Tracy was perfectly suited to the role of truck driver turned millionaire. Tracy’s mother, Caroline, was from a wealthy, Mid-western, Presbyterian family. His father was an Irish Catholic truck salesman.

While primarily maintaining a tight, elliptical story-telling style, Brown does take the opportunity to draw out one particularly salient moment in the plot—juxtaposing Bugs’ pseudo-philosophical monologue on crime and opportunism with his girlfriend Dorothy’s diegetic rendition of Chopin’s Nocturne, Op. 9, No. 2. The bittersweet melody coupled with our protagonist’s unrequited love encapsulate Quick Millions’ mood and message. Bugs’ tragic position in society is permanent, no matter his smarts.

Quick Millions also includes two notable, stand-alone musical performances. The first is a dance sequence highlighting George Raft’s inimitable talents (as Jimmy). This was Raft’s first film. According to a New York Times article, Brown, “searching for a menace with sex appeal,” saw Raft in the Brown Derby restaurant in Hollywood and put him in the film the next day. Raft’s career would span decades as he continued to portray gangsters in films like Scarface (1932), They Drive By Night (1940), and Some Like it Hot (1959). The second musical interlude is an uncredited folksong performed by an unknown singer. The musical style, while antithetical to the film’s gangster milieu, punctuates the narrative and includes lyrics that reinforce the protagonist’s philosophy:

When I was a boy/ I was the pride and joy/ Of my folks way down in Arkansas/ I left my old hometown/ Bad company I found/ I done some things/ That was against the law/ There’s one thing I’ve been taught/ You’re right ‘til you get caught/ As long as I’m free/ I’m gonna do just what I choose/ Wah wah, wah wah…