How Could People Get So Unkind?: Dennis Hopper and Linda Manz’s OUT OF THE BLUE 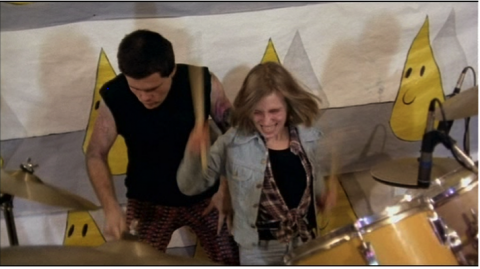 Linda Manz (right) in Out of the Blue

This essay on Dennis Hopper's Out of the Blue was written by Vincent Mollica, WUD Film Programmer and previous contributor to this blog. A 35mm print of Out of the Blue will screen at the Cinematheque's regular venue, 4070 Vilas Hall, on Saturday, October 1, at 7 p.m.

Following the massive success of Easy Rider, people wanted more directed by Dennis Hopper. However, when the counterculture radical/actor/director released the gonzo The Last Movie in 1971, audiences wanted nothing to do with it. Although a fascinating achievement, the film was a colossal failure leaving Hopper, at least as a director, to become a persona non grata in Hollywood. A 1978 New York Times interview finds Hopper, although still acting, tucked away in New Mexico, drinking with his pals Neil Young and Dean Stockwell, truly living the hippie dream. Hopper ends the interview by saying that if he were to direct another feature he would like this one to be easier to follow, while still being a film that would “torment” audiences.

An opportunity to make such a film would arise for Hopper soon after that interview. Hopper was initially meant to act as the abusive father in the Canadian melodrama Cebe about a young girl in peril (Linda Manz, star of Terrence Malick’s Days of Heaven) and her kindly psychiatrist (Raymond Burr). However, Hopper became director after producer Paul Lewis deemed its current director (Leonard Yakir) too inexperienced. Although he doesn’t carry a screenwriting credit, Hopper completely reconstructed the film. Hopper seemed to have a lot of contempt for the aging Burr. He shot many scenes with him, but Hopper knew he would cut him down to two scenes. Hopper comically notes Burr never knew he wasn’t the film’s lead. The emphasis was placed on Manz’s character with a secondary focus on her father and their troubled relationship.

The film, now called Out of the Blue, starts with the father (still Hopper) crashing into a school bus full of children and blowing it up. The story picks up with Hopper in prison and Manz living in a state of total independence, despite living with her kind, but ineffectual, mother (Sharon Farrell). She struts around with her walkman and denim jacket, acting as if the rest of the world exists only to entertain her. Hopper is released from prison, and although he starts to acclimate back into society, with an adoring Manz by his side, he descends into a drunken, violent state. This results in a troubling and unexpectedly brutal finale, especially for Manz’s character. At the end of the film, whether it’s better or not, its characters burn out rather than fade away.

On the film’s DVD commentary track, Hopper claims the film is a “pretty raw look at life.” Despite its more conventional aesthetic and style, Out of the Blue is certainly a raw film. Some have seen it as a kind of commentary on American society at the end of the ‘70s, a reading perhaps driven by having Hopper at the helm. A Variety review from Cannes claims the film looks at “what the 70s drug culture and dregs of the counterculture could have wrought on those easy riders who got off their bikes and tried to conform and had children.” Hopper says that allusions to the kind of characters found in Easy Rider are unintentional, although he doesn’t dismiss the idea.

Another reading might be a feminist one, invited by a gender non-conforming lead character as well as her, eventually, violently intolerant father figure. In a 1983 Heavy Metal interview, when asked about his use of such a “strong, independent, female lead,” Hopper seems progressively minded but he also self-consciously remarks “there’s a great part of me that has always been very cruel, I guess, to women, because I don’t understand them.” It’s a statement that forces one to think about the threat of physical and sexual violence that permeates Out of the Blue’s conclusion, as well as Hopper’s own abuse in his marriage to Brooke Hayward years earlier. The film feels like both a reflexive look at toxic masculinity and potentially an expression of the same.

However, there’s still a lot of joy in Out of the Blue. The film’s most notable aspect is Linda Manz’s Cebe and her relationship with music. Hopper took a liking to Manz on set, and helped form a unique punk character for her. In one sequence Cebe hitchhikes to Vancouver and infiltrates a punk show where the drummer allows Cebe to play. Cebe and the drummer are up against a brightly lit open wall, complete with silly poster, so the moment has a warm quality which matches the sweet interaction between the two. In this moment music is an awesome force that Manz timidly starts to tap into. Hopper says of this moment “she’s scared to death, you can see it in her.” However, as indicated by the warm mise en scène, this fear is an exciting one. Like many people in real life, without other guiding forces, music is Cebe’s roadmap in life, shaping her identity and serving as a great emotional outlet. One wonders about a grownup Cebe, perhaps becoming a Riot Grrl or a Penelope Spheeris-like filmmaker.

Out of the Blue played at Cannes IN 1980, where it picked up fans like Roger Ebert and Vincent Canby, however, it took several years until getting distribution through Discovery Films. Ebert and Canby supported the film on successful small release, and Jack Nicholson, another fan, did a radio spot promoting it. Three years later Hopper would act as Frank Booth in David Lynch’s Blue Velvet, which may go down as his most known performance. Manz did not really work in film after Out of the Blue, although she does appear in 1997’s Gummo. However, a 2011 Village Voice interview with her makes it seems like it’s not a huge deal for her (“I haven’t been to a movie in 20 years…”). It may not carry a huge reputation but, even with its problematic climax, Out of the Blue is a special film. In some ways it’s a follow up to Easy Rider (it was this similarity that attracted the film’s eventual distributor). It’s another tragedy about sticking it to the man, and living a life out of a status quo. However, in placing a focus on gender and music, as well as reigning in some of his excesses, Hopper made a deeply felt, sympathetic piece of cinema.