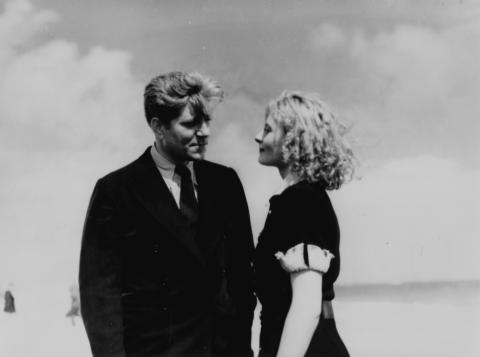 These notes on director Jean Grémillon and his 1941 release Remorques were written by Jonah Horwitz, a Ph.D. candidate in the Department of Communication Arts. A 35mm print of Remorques will kick off a five film Grémillon series at the Cinematheque on Saturday, September 12, at 7 p.m. in our regular screening venue, 4070 Vilas Hall.

The director Jean Grémillon is rather difficult to classify by the terms of most histories of French cinema. He is not identified with a single trend or historical era. Little-known outside of France, he is most famous among his countrymen for a few features of the late 1930s (Gueule d'amour (1937), L'Etrange Monsieur Victor (1938, which screens on September 26)) and for a series of films released during the dark years of the German occupation (Remorques [1941), Lumière d'été (1943, screening on October 3), Le Ciel est à vous (1944)). Of these, only the last two are typically recalled as "Grémillon films"; the others are more likely to be appreciated as contributions to the star persona of Jean Gabin and to the poetic realist tendency of which that persona was an axiom. Grémillon's years after the war were marked by a few commercially unsuccessful and critically ignored features (such as Pattes blanches (1949) and L'Amour d'une femme (1953)); a handful of commissioned documentary shorts; and a great number of unrealized projects. He died in 1959, at the age of 58.

Grémillon's roots go back to the ciné-club movement of the 1920s. In a long tradition of French critics/filmmakers, he hosted ciné-club events, wrote about his favorite films (especially the works of American directors like D.W. Griffith), and made short films, ranging from “industrials” to poetic experiments like Tour au large (1926). Like fellow avant-gardists Jean Epstein, Marcel l’Herbier, and Germaine Dulac, Grémillon was inclined to liken cinema to poetry and music, rather than to other narrative art forms. Grémillon knew more about this than most: he was a trained musician – at one point an aspiring serious composer – and for a time he made a living accompanying silent films on his violin at the Max Linder and other Parisian cinemas. He even created a unique musical accompaniment for Tour au large, recorded on piano rolls for synchronized playback at screenings. (Those piano rolls were rediscovered a few years ago by Rex Lawson, British expert in player pianos.) Grémillon never stopped trying to fuse his knowledge of music (he kept up with the latest trends in art music) with his filmmaking. In the 1950s, he collaborated with the postwar innovators of musique concrète on several adventurous short films.

Grémillon’s first feature films, made in the waning years of the silent cinema, anticipated poetic realism with their heady, brooding mix of documentary and character subjectivity. These first features emphasize water, focusing on those whose occupations keep them close to the rivers and coastlines of France. Maldone (1928) is at least partly a barge film, like Epstein’s La Belle Nivernaise (1924) or Jean Vigo’s later L’Atalante (1934), and indeed it begins with a scene of a barge making its way through a picturesque rural landscape. Gardiens de phare (1929) features a father-son team of lighthouse operators.

Remorques, one of Grémillon’s most commercially successful and well-remembered films, partakes of both of these aspects of his work. Its release date of 1941 suggests it was a film of the Occupation, but in fact it was begun in 1939, not long after the release of the archetypal poetic realist films, Le Quai des brumes (1938) and Le Jour se lève (1939). It was initially a production of the French branch of UFA, Germany’s mighty film studio. Unhappy with the development of the script – based on a novel by Roger Vercel – UFA passed it off to Joseph Lucachevitch, a German producer then working in France, who had a hit in 1938 with Hôtel du nord. It was Lucachevitch who assigned Jacques Prévert – writer of both Quai des brumes and Jour se lève – to rework the screenplay, adding his customarily toothsome dialogue. Lucachevitch also brought on the film’s stars, Jean Gabin and Michèle Morgan, who had already starred together in Quai.

Historical cataclysms threatened the film’s production several times. A long break between location shooting in Brest (on France’s northwest coast) and interiors in a Paris studio was occasioned by the outbreak of war in 1939. The invasion of France in summer 1940 not only put a second halt to production, but also necessitated the flight of the Jewish Lucachevitch to America. Gabin and Morgan would follow his path to Hollywood in early 1941. Grémillon had to complete several scenes of the film – notably some effects shots of ships in a storm – without his stars, and for a time at least, without a producer. (Thanks to Occupied France’s official antisemitism, Lucachevitch’s name would not appear in the credits of the completed film.) Eventually, the German film company Tobis took over production. Grémillon finished shooting in September 1941. Editing was completed – about two years after production had begun – in time for a November 1941 release. By this point, Europe was fully at war, and France had been divided between a zone occupied by the Germans and another ruled by Marshall Pétain.

The air of romantic fatalism that pervades Remorques was not only an integral part of poetic realism but closely identified with Gabin’s star persona – if those two things can truly be disentangled. Like Gardiens de phare, it is set in Brittany (a region Grémillon knew well), and its opening scenes work to establish the tenor and rhythms of life in a particular, working-class milieu composed of sailors whose job it is to rescue ships (and men) stranded at sea – and the women who must contend with their dangerous, unpredictable occupation. Remorques isn’t a documentary portrait, however. As gradually becomes clear, it’s a melodrama – more specifically, a love triangle among Morgan, Gabin, and the latter’s unhappy and sick wife, played by Madeleine Renaud. As with other of Gabin’s films, the illicit affair he enters with Morgan – the wife of the captain of a ship Gabin helped to rescue – seems as inevitable as their eventual parting. The film’s title refers to the ropes used by sea-rescuers to tie a vessel in danger to their own boat. It becomes a metaphor for the ties – often dangerous – between lovers. Although Remorque’s pessimism was not favored by the Occupation authorities, it was a hit with the public. Its success permitted Grémillon to make two strange and wonderful films in Vichy France during the war, including Lumière d’été.

Nearly all of Grémillon’s unrealized scripts from the 1940s and 1950s are ambitious historical dramas, suggesting that he struggled – in vain – to break away from the romantic melodramas to which he was assigned throughout his career. And yet, very few of Grémillon’s contemporaries could similarly muster all the resources of cinema – camera movement, lighting, decor, and above all, acting and music – to create melodramas of such heightened expressivity. Grémillon’s interest in documentary gives the sea-faring scenes an authenticity that intensifies their metaphoric charge. His work with Gabin –  here and in Gueule d’amour – makes extraordinary use of the star’s capacity for both quietude and anger.

Critic Farran Smith Nehme writes that Grémillon "gave his best movies the depth, emotions and cadences of poetry." Remorques provides some of the best evidence of that.