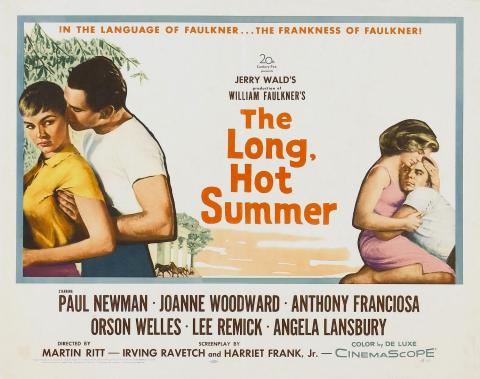 This essay on Martin Ritt's The Long, Hot Summer (1958) was written by Cinematheque Programmer and Project Assistant Amanda McQueen. On Thursday, June 18. a DCP of a recent restoration of The Long, Hot Summer will kick off the Cinematheque's summer season of movies starring Orson Welles, in honor of his centennial. The screening begins at 7 p.m. in our regular venue, 4070 Vilas Hall.

When The Long, Hot Summer was released in April 1958, Variety concluded that although the film had some flaws, it was sure to be a "conversation piece." It had exceptionally broad marquee value, combining new faces with established screen veterans. It was shot on location in color and CinemaScope. It was based on prestigious literary source material. And it capitalized on the current vogue for racy content. By late-1950s thinking, Summer was exactly the kind of film that would help solve the financial problems confronting the American film industry.

With audience attendance down, filmmakers searched for strategies to attract people back to the theaters. Producer Jerry Wald believed the key was high quality adaptations, particularly those that took advantage of Hollywood's relaxing Production Code. So when the husband-and-wife screenwriting team of Irving Ravetch and Harriet Frank, Jr. suggested a film of William Faulkner's The Hamlet (first published in 1940), Wald secured the screen rights – along with those for The Sound and the Fury (1929) – for $50,000.

However, Frank and Ravetch were not particularly concerned about fidelity to the source material, explaining, "In the end, we may salvage only one or two elements – a character perhaps, or a situation, or a few strong scenes – and on this we build a whole new drama." The Long, Hot Summer is thus a patchwork of elements taken from The Hamlet, Faulkner's short story "Barn Burning" (1939), and Tennessee Williams. Ravetch and Frank's version of wealthy patriarch Will Varner (Orson Welles), for example, is heavily influenced by Big Daddy from Williams' Cat on a Hot Tin Roof (1955) – the film version of which was also released in 1958, starring Paul Newman. What the screenwriters sought to retain, however, was Faulkner's focus on class conflicts – particularly the new-money rednecks vs. the decaying Southern aristocracy – and his overall sensibility. Ravetch and Frank described the film as "a comedy about appetites, about love and sex, courtship and mating, ebullient young men and brainy young ladies, the yearning of parents for their children. It departs in fact, but not in faith from William Faulkner's attitudes."

With a budget of $1.6 million, Summer went into production in September 1957. At Ravetch's suggestion, Wald hired Martin Ritt to direct. Ritt was relatively new to Hollywood – he'd met Ravetch while teaching at the Actors Studio in New York – and this was only his third feature film. To capture the right Southern atmosphere, Ritt selected locations in Clinton and Baton Rouge, LA. He also filled most of the leading roles with former Actors Studio students: Newman, Joanne Woodard, Lee Remick, and Anthony Franciosa. The participation of these four rising young stars helped garner extra critical attention, and it was chiefly because of these new faces that the Cannes Film Festival solicited Summer for its 1958 competition. But for Ritt, working with others well-versed in Method acting was ideal. "We understand each other," he explained. "Like orchestra players knowing the tastes of a conductor."

Ritt had a less harmonious experience working with Orson Welles. Welles had a reputation for being difficult – in his own words, "for being the Maria Callas of Character Men" – that often impeded his success in Hollywood. Indeed, it was for this very reason that 20th Century-Fox hadn’t wanted him for Summer, but Ritt had insisted that Welles was right for the part because of his "incredible persona." Later, however, he did admit that the actor had been "a pain the ass." Welles challenged Ritt on every aspect of the production, and he had a somewhat strained working relationship with the other cast members, partially because he was one of the few non-Method actors. At one point, Welles compared doing a scene with Newman and Franciosa to "trying to ride a bicycle through a barrel of molasses." But Ritt, too, was strongly opinionated, and rumors of Welles "snapping and snarling under [Ritt's] clever whip" began to circulate in Hollywood, ultimately earning the director the title of "the Orson Tamer."

Despite these on-set tensions, the film is full of strong performances. Variety called the decision to cast Angela Lansbury as Will’s long-time mistress "inspired," and the on-screen chemistry between Newman and Woodward was likely helped by their real-life romance. The two married a few months before the film was released. The only complaint was that Welles' heavy Southern drawl and often-emphatic delivery style sometimes made the dialogue unintelligible (a fair point). Overall, though, critics tended to agree with Variety that "What makes the picture are the full-bodied, full-blown characters."

The film also garnered attention for its adult subject matter. Fox's ads promised "scene-after-scene in the frankness of Faulkner!" and critics generally liked that the film was "steamy with sex and laced with violence and bawdy humor." However, most critics also felt that this frank melodrama gave way, somewhat abruptly, to a clichéd happily ever after. Some suspected that influential pressure groups like the Catholic Legion of Decency – which were unhappy with Hollywood's new adult direction – might have been responsible for the "soap opera" ending. Ritt agreed that Summer’s conclusion perhaps makes it "seem oversimplified and naïve." "But on the whole," he added, "it's good lusty fun and occasionally quite saucy and even momentarily touching."

Audiences seemed to agree. Summer was only a modest financial success, but it was one of the top grossing films of 1958, and the soundtrack of Alex North's sultry jazz-based score also sold well. Ritt and Wald received guild nominations for directing and producing, respectively, and Paul Newman won Best Actor at Cannes. Indeed, Summer was the most popular American film at the festival that year, leading Variety to assert that it was "the kind of picture the US should send to festivals."

Faulkner reportedly liked the film, too, and it's commonly regarded as one of the best adaptations of his work. As Time wrote, "Faulkner is as hard to kill as a Mississippi water moccasin, and his energy coils and snaps and hisses" despite Ravetch and Frank's loose approach. So although critics found fault with the narrative structure, they had to admit that The Long, Hot Summer was excellent storytelling. "It is melodrama frank and unashamed," Variety asserted. "It may be preposterous, but it is never dull."