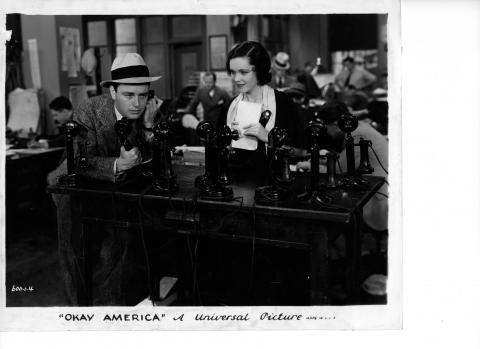 These notes on director Tay Garnett and his early features, Celebrity (1928) and Okay, America! (1932), were written by Derek Long, Graduate Student and Teaching Assistant in the Communication Arts Department at UW Madison. 35mm prints of Celebrity and Okay, America! will screen in a double feature on Friday, May 8, beginning at 7 p.m. in our regular Cinematheque venue, 4070 Vilas Hall.  Celebrity will feature live piano accompaniment by David Drazin.

William Taylor “Tay” Garnett (1894-1977) is nowhere near as well-known today as John Ford (born the same year) or Howard Hawks, and to a certain extent it is not hard to see why. His most famous film is undoubtedly The Postman Always Rings Twice (MGM, 1946), but most would be hard-pressed to name another Garnett film, despite his forty-year career in the industry. The truly knowledgeable might cite the romantic melodrama One-Way Passage (Warner Bros., 1932), in which William Powell and Kay Francis play doomed lovers enjoying a last bittersweet encounter on a transpacific ocean liner. But few of Garnett’s other minor classics—be it the Gable-Harlow adventure pairing China Seas (MGM, 1935), the studio system satire Stand-In (United Artists, 1937), or the Loretta Young B-noir Cause for Alarm! (MGM, 1951)—have entered popular consciousness the way that nearly any of Ford or Hawks’ films have.

This relative obscurity is not for lack of either talent or interest; rather, it is largely because Garnett was much closer to the archetypical “studio director” than his famous contemporaries. While a few French critics raised Garnett to auteur status, his films lack the usual clear signs of an authorial stamp. Andrew Sarris placed Garnett in “expressive esoterica,” his third-highest category of director classes, dismissing him as inconsistent—“and inconsistency can never be defined satisfactorily.” A more charitable reading of Garnett would characterize him as one of the most invisible practitioners of Hollywood’s “invisible style”—as well as a director of immense competence. Unlike Ford, he worked in a wide variety of genres, making musicals, westerns, weepies, adventure films, crime melodramas, and—his personal favorite—comedies. Garnett thus shared Hawks’ characteristic versatility, even if he lacked the latter’s clear interest in recurring themes and character types.

Where Garnett really shined was in the creation of well-structured Hollywood narrative. He nearly equaled Hawks’ talent for efficient and creative storytelling; his best films seamlessly integrate characters with their settings, and Garnett generally succeeded in avoiding the tendency to use generic plots as interchangeable vehicles for stars. Garnett’s talents as a storyteller were no accident, though its origins might seem surprising. In his youth, Garnett dabbled as a vaudeville acrobat, and during his Navy service in the First Word War, he organized a very successful series of amateur vaudeville shows to boost morale. This stint as a military impresario landed him a number of jobs once he left the navy in 1922, including touching up film scenarios for independent producer Alan Holubar and writing titles for Charley Chase and Will Rogers comedies released by the Hal Roach Studios. In 1924, Mack Sennett hired Garnett as a full-fledged scenarist, and throughout the mid-twenties he wrote (and eventually directed) two-reel comedies.

In an interview with Rick Fernandez for The Velvet Light Trap shortly before his death, Garnett spoke of the formative impact of his work with Sennett: “You learned use of the camera [and] story construction, strange as it may seem. It would be difficult to find construction in a Sennett comedy, but it was there. Most of the comedies would run 4 or 5 reels long when they finished shooting before they boiled it down to 2 reels. So a lot of the continuity was murdered in the process, but they kept the laughs.” Garnett’s narrative sensibility and skill was honed, fundamentally, through comedy; as Sarris put it, “[his] personality is that of a rowdy vaudevillian, an artist with the kind of rough edges that cause the over-civilized French sensibility to swoon in sheer frustration.”

Both of the Garnett films in this double feature—Celebrity and Okay, America!— also show off something of the director’s fine vaudeville-based comic sensibility. Celebrity was Garnett’s first and only silent feature; his second feature, The Spieler (1928), began as a silent but incorporated talking sequences and a synchronized soundtrack. Based on a Broadway play by William Keefe and released by Pathé Exchange (which would evolve into RKO by the end of 1928), Celebrity features Robert Armstrong as third-rate prizefighter “Kid” Reagan, whose manager Circus (Clyde Cook) hatches a scheme to publicize his client by passing him off as a poet. In many ways, Celebrity was perfect material for Garnett. The original play was so full of vaudevillian gags and wordplay that Variety’s review of the film was disappointed that the film was a silent: “what a talker it might have made.” Luckily for us, however, Garnett uses that silence to his advantage, delivering delightful visual gags and intertitles full of period slang.

Okay, America! was Garnett’s first feature for Universal, and was part of a spate of newspaper films kicked off in 1931 by Lewis Milestone’s The Front Page (United Artists) and continued in 1932 with Blessed Event, Love is a Racket (both Warner Bros.), and Is My Face Red? (RKO). In his performance as “Broadway Broadside” columnist Larry Wayne, Lew Ayres plays a thinly-veiled version of famed gossip columnist Walter Winchell (himself an ex-vaudevillian). Ordered to cover the kidnapping of a cabinet member’s daughter—a ripped-from-the-headlines plot point based on the Lindbergh kidnapping—Wayne soon finds himself wrapped up in a tangled web of drugs and corruption. Featured in the role of gangster “Duke” Morgan is character actor Edward Arnold, best-known to viewers as Boss Jim Taylor in Mr. Smith Goes to Washington (Columbia, 1939), in his debut talkie performance. The importance of vaudeville to Garnett’s command of sound cinema is in full evidence in Okay, America!, especially when it comes to the rapid pace of the dialogue. As Garnett stated to John Gallagher, “I have always very consciously striven for pace in every scene I ever shot…ninety percent of the time, if a scene has a pace problem, it’s because it’s too slow rather than too fast.”

Both of these early-career films force us to reconsider Garnett’s contribution to Hollywood cinema, and to take stock of the “rowdy vaudevillian” not as an uneven journeyman, but as a director who could find, at the core of every script, a great story to tell.