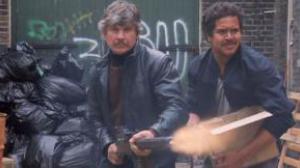 These notes on Michael Winner's Death Wish 3 (1985), part of our Cannon Fodder series, were written by Maureen Rogers, Teaching Assistant and Ph.D candidate in the Department of Communication Arts at UW Madison. Originally scheduled to screen on Monday, April 6, a 35mm print of Death Wish 3 will now screen on Monday, May 4, at 9 p.m., in the Marquee Theater at Union South.

Death Wish 3, is the second Death Wish film produced by Menahem Golan and Yoram Globus for Cannon Films. While the mid-eighties saw Cannon pursuing high brow releases such as John Cassavettes' Love Streams (1984) and Andrei Konchalovsky’s Runaway Train (1985), the company continued to rely on a slate of low-budget action-oriented features such as the Death Wish series--films that did little to improve the company's respectability in Hollywood but that continued to turn a profit at the box office.

1982's Death Wish II, a result of a distribution agreement with Filmways/Orion and a 3-picture deal with Charles Bronson, was a boon for Cannon, as the film grossed $16 million domestically. Three years later, Michael Winner and Charles Bronson once again returned to make a third film for Cannon. Death Wish 3, the lowest-performing in the series to date with a $6 million domestic gross, likely fell short of the expectations of all involved. Moreover, the film received unequivocally poor reviews. Though Variety noted director Michael Winner's "customary tongue-in-cheek panache," the trade journal criticized the filmmakers for poorly motivating the wildly over-the-top violence of Death Wish 3, writing that "attempts to justify the ensuing mass-murder are perfunctory." In Death Wish, Paul Kersey tragically loses his wife. In Death Wish II, Kersey loses his beloved daughter. In Death Wish 3, Variety complained, Kersey has little left to lose. But this doesn't stop him, however, from expending a large amount of ammunition to defend the streets of New York City from gangs of crooks targeting the city's innocent elderly.

Amplifying the violence and body count, Death Wish 3, more so than its predecessors perhaps, was produced and received as an exploitation film. Menahem Golan has acknowledged that Death Wish 3 was, in concept, designed to capitalize on the real life rampage of Bernhard Goetz. On December 22, 1984, as he was being mugged on a New York subway car, Goetz fired at four black youths nearly killing them. This incident was highly publicized at the time and, to Golan, provided perfect fodder for a Cannon film. Inspired by these current events, Golan began production on Death Wish 3 and even pressured the crew to complete filming so as to release the film in the fall of 1985, when Goetz was scheduled to stand trial. Cannon also promoted and marketed the film with rhetoric that would have explicitly evoked the subway shooting, at least for New Yorkers. The tag line of one ad for the film read: "He's back in New York cleaning up the streets his way."

Death With 3 has also gained a cult following, owing in part to the under-motivated extreme violence, stilted dialogue, and certain odd elements of the film's production design. Much of the movie was shot on location in London, though the film is set in New York City, a fact that is strikingly noticeable in certain scenes. For fans of the series, this likely only adds to the fun of watching Charles Bronson clean the mean streets of New York, taking on a cast of characters nearly as seedy and deranged as Paul "Kimble" Kersey himself.