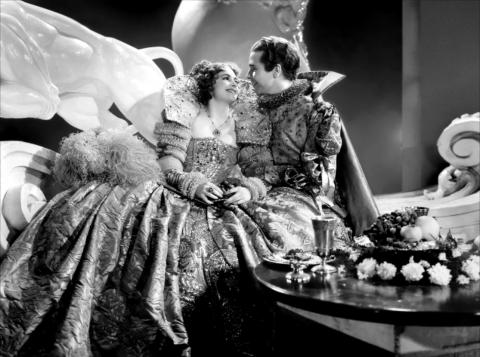 This essay on the 1935 Warner Bros. adaptation of William Shakespeare's A Midsummer Night’s Dream was written by Erica Moulton, PhD candidate in UW Madison’s Department of Communication Arts. A 35mm print of A Midsummer Night's Dream will screen in our Sunday Cinematheque at the Chazen retrospective honoring the centennial of Olivia de Havilland on Sunday, November 13 at 2 p.m. at the Chazen Museum of Art. Shakespeare's First Folio will be on display at the Chazen through December 11.

Max Reinhardt and William Dieterle’s 1935 film version of A Midsummer Night’s Dream tests the elasticity of Shakespeare’s comedies and how effectively they can be translated into the Hollywood mold. The film was made with the best of artistic intentions, with the accomplished theatre director Reinhardt coming to work for Warner Brothers after fleeing Germany. His vision of Midsummer was set in an entirely fantastical, supernatural landscape, an Athenian forest lit by thousands of twinkling fairy lights, illuminating the mirth and mayhem that unfolds. The film succeeds on a number of fronts, being both an opulent spectacle and a lively recreation of Shakespeare’s play. However, it also paradigmatic of the dubious relationship between Hollywood and Shakespeare.

The story of the play, A Midsummer Night’s Dream (originally performed in the 1590s) comprises three separate stories woven together in a common setting. The lovers, the fairies, and the rude mechanicals (actors) all frolic through the forest the night before King Theseus will wed his beloved Hippolyta, Queen of the Amazons. The lovers’ story plays out as a typical youthful romance with a supernatural twist. Helena (Jean Muir) loves Demetrius. Demetrius (Ross Alexander) wants to marry Hermia (Olivia De Havilland). Hermia loves Lysander (Dick Powell). When Oberon, king of the fairies, and his mischievous sprite Puck intervene with an enchanted flower, the lovers’ affections comically shift from scene to scene, until Puck sets them right. Meanwhile, the rude mechanicals rehearse for their upcoming performance of “Pyramus and Thisbe” at Theseus’ wedding. The pompous self-appointed leading man of the acting troupe, Bottom (James Cagney), clashes with the beleaguered manager Peter Quince, before the actors also become embroiled in the supernatural plot when Bottom is cursed with a donkey’s head by Puck. Bottom is taken in by Titania, Oberon’s estranged fairy wife, who is under the spell of Puck’s love potion. Eventually, all is set right by the supernaturals and the play ends with the performance of the mechanicals’ hilariously awful play.

The chaotic energy Midsummer elicits on the stage, with the frequent shifts between the action of the three groups, and Puck running through them all, commenting to the audience, make it an awkward fit for the screen. Moreover, Reinhardt changes little in adaptation, mostly due to his background in theatre, and because the 1935 film started out as a stage production that he mounted at the Hollywood Bowl the previous year. Reinhardt brought from the stage production his obsession with foliage, and he attempted to fill every last film frame with as many trees as he could until his cinematographer, Hal Mohr, intervened, pointing out that the excess of trees were making it impossible for him to light properly. A compromise was reached when Mohr discovered he could spray paint the leaves in the forest silver to achieve the sparking, eye-catching effect Reinhardt desired. For the filmed version, Reinhardt brought in famed choreographer and ballerina Bronislava Njinska to arrange the elaborate fairy ballets. For the music, Erich Wolfgang Korngold was hired by Reinhardt to arrange the music of Felix Mendelssohn for the film, which would prove to be the beginning of Korngold’s compositional career at Warner Brothers.

Despite the artistic effort being deployed by Reinhardt and his company, the executives at Warner Brothers were considerably nervous at the prospect of a Shakespeare movie, after the disastrous box-office failure of Taming of the Shrew in 1929. In the end, A Midsummer Night’s Dream did little to quell the studios’ fears of the Bard. The film was received mildly by both audiences and critics, and after another underwhelming Shakespeare adaptation in 1937 with Romeo and Juliet, Hollywood largely avoided Shakespeare’s plays for the next decade.

In reality, the film’s tepid response might have less to do with Shakespeare, and more to do with the general mismatch of stage comedy and screen comedy. Midsummer on stage thrives in moments of messiness and the unexpected or spontaneous. The closest Reinhardt and Dieterle’s film comes to recreating that is in the mechanicals’ rehearsal scenes, which allow Cagney and comic actors like Hugh Herbert and Joe E. Brown to shine. However, even the way the film was marketed betrays the discomfort of Warner Brothers with Reinhardt’s approach towards adaptation. The original trailer for the production shows the actors first in their modern, 1930s clothes, and then transformed in their Midsummer costumes. This self-referential touch is out of step with Reinhardt’s opulent all-consuming vision of the play. He is going for a high romantic, even operatic interpretation, especially in the scenes with the fairies. The film’s marketing also emphasizes the high cultural value of the film, calling it a “screen masterpiece” and saying the story’s romance has “inspired lovers for 300 years”. Yet, Shakespeare’s name is not mentioned once.

Despite some of the film’s awkwardness, there is beauty to behold in Reinhardt and Dieterle’s Midsummer. In the spangled forest, the magic of film allows the fairies to be fully realized ethereal beings, dancing like supernatural chorus girls. Olivia de Havilland is charming as Hermia, a woman first beloved, then spurned by two suitors. And Mickey Rooney’s performance as Puck, which can be polarizing for his manic energy and unusual line deliveries, is at least fascinating in the sense that Rooney’s youth makes him of similar age to the boy performers that would have played Puck in the 1590s production. Warner Brothers and the other studios may have shunned Shakespeare for years after, but A Midsummer Night’s Dream proves that they were at least willing to take risks, even if they didn’t always pay off.