Humanity Amidst Austerity: Wim Wenders' ALICE IN THE CITIES 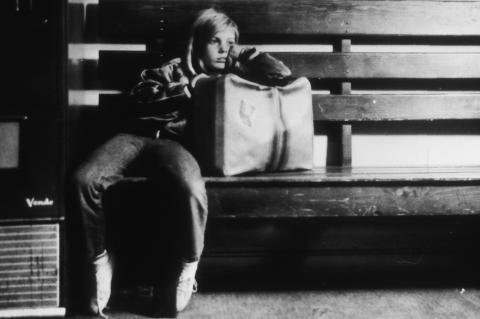 This essay on Wim Wenders' Alice in the Cities (1974) was written by Tim Brayton, PhD candidate in UW Madison’s Department of Communication Arts. A recently restored DCP of Alice will be the second offering in the Cinematheque's Wim Wenders series on Saturday, October 29, at 7 p.m. in our regular venue, 4070 Vilas Hall.

Alice in the Cities was the fourth feature directed by then 28-year-old Wim Wenders, and by his later account, it was the first one that felt was entirely "his." In particular, coming off of the critical and commercial failure of his adaptation of The Scarlet Letter, the young Wenders was anxious to make something that would speak to his own worldview and sense of aesthetics; he also wanted to continue his working relationship with 9-year-old Yella Rottländer, whose performance as Hester Prynne's daughter Pearl was the only element of The Scarlet Letter that the director felt had turned out well.

The solution to these hopes came in the form of a suggestion by Peter Handke, the young Austrian author whose work was ushering in a new phase of German-language literature (Wenders had already worked with Handke on his second feature, The Goalie's Anxiety at the Penalty Kick, screening Saturday, December 3 at Cinematheque). Drawing on Handke's experience as a single father, Wenders wrote the story of a creatively frustrated writer/photographer who is unexpectedly saddled with a young girl to take care of, after her mother (Lisa Kreuzer, haunting in a small part) disappears for vague reasons in New York City. Together, Philip Winter (Rüdiger Vogler) and Alice Van Dam (Rottländer) travel from America to Amsterdam to Germany, ostensibly hunting for Alice's grandparents, but in fact fulfilling that greatest function of the characters in a road movie: to be our eyes and ears observing a changing world at a single moment in time.

It's clear even before Alice herself shows up that Alice in the Cities will be a film extensively concerned about human landscapes. The film opens with a geographically vague tour of America, with Philip ostensibly writing a magazine article, but far more interested in spending his time trying to capture something of the places he sees with his camera. He fails, perhaps, but the film itself tries to make it up for him: Alice in the Cities was shot on black-and-white 16mm film by the great cinematographer Robby Müller (who'd worked on all of Wenders' features to that point), making the first masterpiece in the stark high-contrast style he'd later use in such films as Jim Jarmusch's Down by Law and Dead Man. Throughout the whole film, but especially in the largely empty scenes of American streets and towns in the first act, Müller's images evoke the crisp stylistic harshness of the great documentary photographers like the Swiss-born Robert Frank, another German-speaking European who captured an outsider's perspective of America on celluloid.

Unlike Wenders and Müller's subsequent collaboration Paris, Texas, however, Alice in the Cities isn't primarily a referendum on America, but on Europe, here conceived of as a series of places which have lost their identity. For Wenders, this void is filled, for better or worse, by fragments of American pop culture (such as a Chuck Berry concert, filmed in Canada by D.A. Pennebaker, but repositioned in Germany by Wenders), including the structure of this very movie, a version of the quintessentially American genre of the road movie transformed into a study of two Germans abroad. Like so many road movies, this is primarily a study of two lost souls: Philip, whose sojourn in America has left him with a gloomy view on the world and culture, and Alice, whose search for the details of a past that she's forgotten provides the bulk of the narrative spine. It's not hard to see them as a metaphor for a Germany that has lost everything that defines it, trying to find its place in a new world.

Let us not focus so much on the symbolic aspects of the film that we lose sight of its very real strengths as a story about two people, though. There's nothing terribly innovative about the story of a sad adult man who is rejuvenated from the presence of a spirited child (Peter Bogdanovich's Paper Moon explored the same theme just a year prior to Alice in the Cities, very nearly shaking Wenders's resolve to make this film at all), but rarely if ever has that stock narrative been handled to such brilliant effect as we see here. Wenders's instinct about Rottländer was spot on: her performance as Alice is surely one of the great triumphs of child acting in all of cinema, playing the character with the natural inquisitiveness and lack of self-consciousness of childhood. She's quick-witted but never precocious, and she inhabits the screen with a comfortable naturalism that cuts against the stylized imagery and heavily literary qualities in the plotting to keep Alice in the Cities first and always a story about actual people.

She's well-paired with Vogler, a Wenders regular appearing in his third consecutive film for the director. Initially serving as little more than the vessel for the script's themes (the frustrated artist, angry at the coarsening effects of noisy mass culture, is an obvious stand-in for Wenders), Vogler is note-perfect in depicting the way that a sentimental cynic can be charmed by a cute kid. It's almost unreasonable, from a logical standpoint, how quickly and effortlessly Philip turns into a good-natured surrogate dad; the great achievement of the two leads is to establish such a warm sense of chemistry that we fully believe in Philip's redemption. There's no shortage of great elements within Alice in the Cities, one of the most beautiful and culturally-attuned films of its era. But perhaps the greatest of all its strengths is the affection and compassion it shows towards its central pair, a bright point of humanity in the midst of an austere, conflicted world.