THE BEST OF IL CINEMA RITROVATO 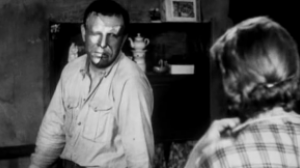 A happy, newlywed laborer is disfigured after an explosion in the quarry where he is working and is forced to wear a mask. At the peak of his fame as an actor in silent cinema, Vanel (The Wages of Fear) stepped behind the camera and completed his only feature film as director. “Dans la nuit is a disturbing, surprising film in which [Vanel] demonstrates an incredible sense of framing and editing and a wild demented modernity” (Il Cinema Ritrovato Program Guide). Released and quickly withdrawn at the dawn of talkies, Dans la nuit is perhaps France’s last silent film. Unseen for nearly a century, Vanel’s gem has been restored by Institut Lumière and Éclair Classics. Live piano by David Drazin. 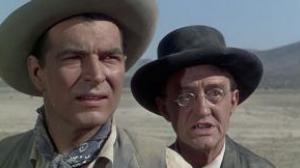 In the last film produced by the celebrated Val Lewton (Cat People, I Walked with a Zombie), a gambler and gunman reluctantly returns to the desert mining town he’s just been expelled from to warn the citizens of an impending attack by Mescalero warriors. Excitingly directed by Fregonese, the final siege sequence inside a dance hall turned fortress sets the stage for films-to-come like Rio Bravo, Night of the Living Dead, and Assault on Precinct 13, and is “one of the most remarkable passages in American cinema” (Dave Kehr, Il Cinema Ritrovato Program Guide). Restored in 4K in 2021 by Universal Pictures in collaboration with The Film Foundation at NBC Universal StudioPost laboratory, from a 35mm nitrate 3-strip original negative preserved by UCLA Film and Television Archive. 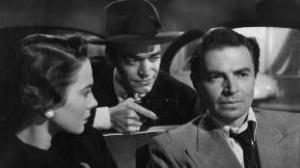 Mason plays Dr Frank Matson, a shady physician who takes off with a bag full of stolen money and the girlfriend (Toren) of a gang leader (Duryea), hiding out with her in Mexico. But fate knocks loudly on the door echoing one of Fregonese’s major preoccupations: the encounter with death. Matson takes advantage of his medical knowledge to deceive and to negotiate his way out of trouble. But he later comes to use it to integrate and eventually to heal. He regains his sense of self-worth by opening a hospital, curing the poor in a Mexican village. The game of fate involves things happening twice: a car accident, an encounter with a sick Mexican patient, a journey by aeroplane, and the face-off with Duryea. A sense of doom hangs in the air and pushes all the players into the “red circle” where they meet their designated fate. This is the ballad of a fatalist” (Ehsan Khoshbakht, Il Cinema Ritrovato Program Guide). 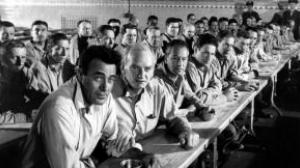 For this adaptation of a psychologist’s memoir, in which the author recalls his time using modern psychological techniques to help San Quentin inmates, director Fregonese shifts the focus of the story onto the prisoners. Produced by Stanley Kramer and shot on location at San Quentin, My Six Convicts is genuine auteurist cinema, where, according to film critic and Il Cinema Ritrovato curator Ehshan Khoshbakht, “the controlled space of the prison becomes a metaphor for the filmmaking itself, in which every element is determined by Fregonese, especially in his mosaic-like arrangement of the violence inherent in spaces of confinement…eroding any sense of comfort and belonging.” 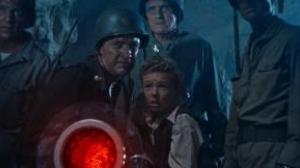 “Gee, whiz!,” exclaims young David (Hunt), as he witnesses a flying saucer landing near his home. Soon, his parents and all the adults in his smalltown begin acting strangely and it’s up to David to confront the green, bug-eyed aliens and their giant-brained leader who controls the grown-ups! Filmed in glorious color and directed by former set designer Menzies, Invaders from Mars remains one of the most eye-poppingly delightful films of the 1950s, especially in this new 4K restoration from Ignite Films. 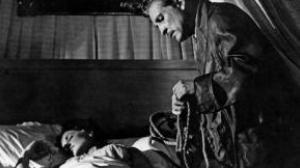 Spanish auteur Buñuel is best remembered for his surreal satires lampooning sex, religion, and the upper classes. With 1953’s Él, the enigmatic auteur made one of the most scathing, scabrous dark comedies of his career. Made at the height of Buñuel’s period working for the Mexican film industry, Él tells the story of the marriage of Francisco and Gloria. Gloria marries Francisco because of his charm and social position; she soon finds, however, that she has married a man who is pathologically jealous, interpreting infidelity in Gloria’s every move. Adorned with striking touches of surrealism, Él deftly balances its comedic and unsettling tones. (JB). Restored by The Film Foundation's World Cinema Project, Les Films du Camélia and Cineteca di Bologna at L'Immagine Ritrovata Laboratory, with the support of OCS and in association with Películas y Videos Internacionales. Special thanks to Guillermo del Toro and Daniela Michel. Funding provided by the Material World Foundation. 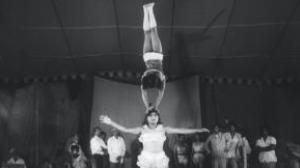 The bucolic existence of a riverside town is disrupted by a traveling circus troupe. Filmed in cinéma-vérité style, director Aravindan rounded up a troupe of actual circus artistes and traveled with them to the village of Thirunavaya on the banks of India’s Bharathapuzha river. The resulting film is a gently poetic allegory that maintains the improvisational and immediate qualities of a documentary. Restored by Film Heritage Foundation, The Film Foundation’s World Cinema Project and Fondazione Cineteca di Bologna at Prasad Corporation Pvt. Ltd’s Post – Studios, Chennai and L’Immagine Ritrovata Laboratory in Bologna, and in association with Producer K. Ravindranathan Nair of General Pictures, and the family of Aravindan Govindan. Presented with the support of the Center for South Asia. 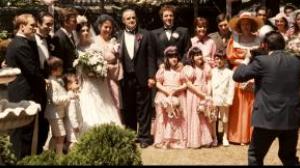 Coppola’s breakthrough film as a director is the epic narrative of the near demise and reemergence to power of the Corleone Mafia clan.  The film features stellar performances by a cast that also includes Diane Keaton, Robert Duvall, Sterling Hayden and John Cazale. A compelling story on its own terms, The Godfather also offers the big screen’s most powerful metaphor for the ruthless nature of American big business. A new 4K digital restoration will be screened.