Our annual series co-presented by UW Madison’s Latin American, Caribbean and Iberian Studies (LACIS) pays tribute to the punk explosion that rocked Madrid in the wake of the Franco era. Defined by an outrageous, flamboyant sensibility and sexual freedom, “La Movida Madrileña” was the cultural movement in which outré artists like Pedro Almodóvar got their start. Our series kicks off with a brand-new 35mm print of Iván Zulueta’s Arrebato, which Almodóvar has declared his favorite horror film. A parallel discovery in a different register, the documentary/fiction hybrid Dressed in Blue is a frank and revealing portrait of Madrid’s trans community in the early 1980s. Finally, scene figurehead Almodóvar is represented via his wild nunsploitation riff Dark Habits, whose original poster was designed by Arrebato director Zulueta. Not for the prude or uptight, the libertine and energetic movies of La Movida Madrileña exemplify freedom onscreen. (MK) 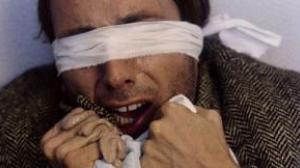 Horror movie director José (Poncela) iis adrift in a sea of doubt and drugs. As his belated second feature nears completion, his reclusive bubble is popped by two events: a sudden reappearance from an ex-girlfriend (Roth) and a package from past acquaintance Pedro (More). In the package: a reel of Super-8 film, an audiotape, and a door key. From there, the boundaries of time, space, and sexuality are erased as José is once more sucked into Pedro’s vampiric orbit. Together, they attempt the ultimate hallucinogenic catharsis through filming and being filmed. The dimension-shattering blend of madness and cinema in Arrebato (rapture) has earned it comparisons to Zulawski’s Possession. This mindbending piece of Post-Franco counterculture was the final feature of cult filmmaker and movie poster designer Zulueta. Pedro Almodóvar’ has declared it his favorite horror film! 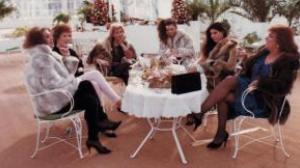 An invaluable look into the lives of the trans community in post-Franco Madrid, this newly restored docu-fiction hybrid is ripe for rediscovery. A group of trans women converse with disarming candor about their lives, transitions, and experiences with prostitution, while filmed interludes draw us into each of their day-to-day lives. Equal parts empathetic and frank, Dressed in Blue is an essential addition to the canon of pioneering queer cinema. (MK) 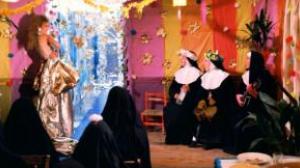 On the run after her lover ODs, cabaret singer and junkie Yolanda (Pascual) decides to hide out in a Madrid convent populated by a group of lesbian, drug-using nuns. Employing a level of anticlerical satire that takes it far beyond Bunuelian, Almodovar delivered his raucous and very funny fourth feature film, his first with a proper budget and producer.