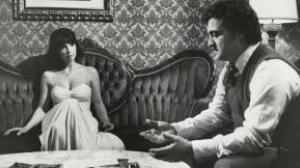 The directorial debut of screenwriter Tewkesbury (Nashville) is one of the most idiosyncratic and hardest-to-see features of the late 1970s. Leonard and Paul Schrader’s original screenplay follows young widow Dianne (Shire, in a rare leading role) on a road trip where she attempts to reconnect with the old boyfriends who had the most impact on her life: filmmaker Jeff (Richard Jordan), lounge lizard Eric (Belushi), and recluse Wayne (Carradine). Belushi, performing “Jailhouse Rock” more than a year before The Blues Brothers was released, is a standout in a cast that also includes John Houseman and Buck Henry. A new 35mm print, courtesy of Rialto Pictures, will be shown.