In collaboration with the student-run WUD Film Committee, the Cinematheque brings back our Monday evening series of fun screenings that travel down the more grungy avenues of contemporary pop cinema. The screenings take place on at the Marquee Theater in Union South. This season’s offerings all shown on DCP on the Marquee’s new digital projection system, include the exploitation/arthouse classic Ms. 45; the ultra freaky 70s “spaghetti sci-fi/horror” The Visitor; and a big-screen showing of John Carpenter’s cult classic, Escape from New York. 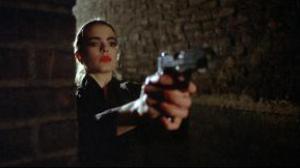 Brutally raped twice, the mute Thana (Zoe Tamerlis) arms herself and sets out to take revenge on any man who exploits or degrades women. The final body count is as high as the title’s caliber. Kabuki and silent cinema are evoked in equal measure in this fever dream of NYC in the early 80s. An arthouse film masquerading as exploitation and vice versa, Ferrara’s cult classic is a story of death and rebirth, a metamorphosis parable from hell. (BR) 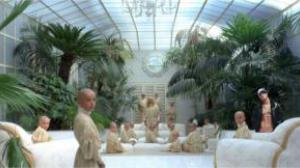 Sheer cinematic mayhem, this bonkers spaghetti sci-fi/horror is an amalgam of The Omen, The Birds, The Fury, Close Encounters of the Third Kind and a few other considerably better movies. Filmed largely on location in Atlanta, Georgia by a mostly Italian crew, the “story” concerns a nine-year-old girl with telekinetic powers who may or may not be the antichrist and the attempts of interplanetary forces (led by Huston) to stop her before she blows things up real good. The oddball cast also includes Euro superstar Franco Nero (Django) in a cameo as Space Jesus and Glenn Ford as a cop who, while driving, gets his eyes pecked out by a hawk. 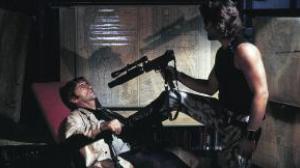 Russell stars as legendary action movie anti-hero Snake Plissken in this fun, futuristic thriller, briskly and classically directed by genre specialist Carpenter. Career criminal Snake is plunged into 1997 Manhattan, which has been turned into a maximum security prison for the country’s worst criminals. His mission: rescue the U.S. President, who’s being held hostage inside by the Duke of New York (Hayes).