Meet the New Boss: Joan Micklin Silver's BETWEEN THE LINES 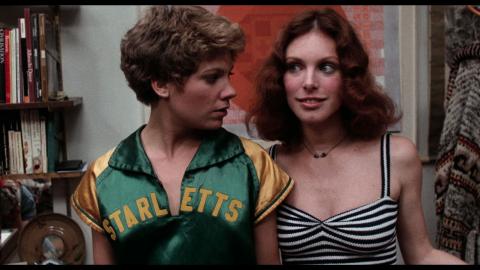 Lindsay Crouse and Gwen Welles in Between the Lines

These notes on Joan Micklin Silver's Between the Lines, were written by Zachary Zahos, PhD candidate in UW Madison's Department of Communication Arts. A recently restored DCP of Between the Lines kicks off our series of Silver movies on Friday, September 24 at 7 p.m., in our regular screening venue, 4070 Vilas Hall, 821 University Ave.

The Cinematheque’s sole directorial retrospective this semester celebrates Joan Micklin Silver, one of the most cherished American auteurs of her generation. She died on December 31, 2020, though news of her passing at 85 years old only reached the film community on New Year’s Day. Either way, it was met as a real blow: the cap to a terrible year, and a heartless start to the new one. Silver was a quiet hero to many, from women in the film industry, to Jewish American cinephiles, to lovers of the Lower East Side and other pockets of alternative urban culture. Born and raised in Omaha, Silver met her husband Raphael (Ray) D. Silver in New York while attending Sarah Lawrence College. She honed her craft making educational films, and only found entry to the world of features through Midwest Films, the independent production and distribution company she and Ray founded. Midwest raised finances for her 1975 debut Hester Street, which screens October 8, and Ray’s 1978 directorial effort On the Yard, screening October 1. Before Silver’s most renowned studio films, Chilly Scenes of Winter (1979, United Artists) and Crossing Delancey (1988, Warner Bros., screening October 15), Midwest produced one more film, the 1977 workplace comedy Between the Lines.

Joan Micklin Silver’s second feature reminds us of the renewed, fond attention her career received in the immediate years before her death. Between the Lines premiered on April 27, 1977, twenty-nine days before Star Wars. Based on anecdotal polling I have done of family and colleagues who attended movies then, it was a fondly remembered success — it sold a respectable 38,000 tickets in its first two weeks in Wisconsin alone. Unlike Star Wars, however, Between the Lines had been next-to-impossible to watch, in theaters or on legal home video, in the decades since. That thankfully changed in 2019, when Cohen Media Group restored the film and re-released it to considerable appreciation, including an appearance at the 2019 Wisconsin Film Festival. As much as any film under her name, Between the Lines exemplifies Silver’s full-hearted spirit and keen insights on human behavior, slyly weaving several digressive narrative strands into a prescient, end-of-an-era tale of corporate takeover.

Breezy and voluminous, Between the Lines follows the hijinks and intersecting personal lives of those working at the Back Bay Mainline, a floundering alt weekly in Boston. Promoted today for the high wattage of its cast, the film was then filled with relative unknowns, like John Heard, Jeff Goldblum, Lindsay Crouse, Bruno Kirby, Jill Eikenberry, Gwen Welles, and Joe Morton in a too-small role. As penniless rock critic Max Arloft, Goldblum chortles, swaggers, and smirks in a hot red jacket — an enduring star persona fully formed before he turned 25. A good chunk of the film is devoted to humorous character moments, like Max showing the meek classifieds salesman David (Kirby) the secret to his weed budget, by going to a record store and trading in all his mint, promotional LPs. In his quest to become a serious reporter, David gradually moves closer to the center of the film’s plot, yet Silver still finds ways to trace his arc toward legitimacy with bizarre, alienating tangents: At a party, David lurks around a source, quacking to catch his attention. Silver brilliantly stages the awkward pause that ensues, when the source (who is on a date) briefly gives David the time of day, and David somehow stammers himself into a follow-up meeting.

Screenwriter Fred Barron drew from his experience writing for alt weeklies Boston Phoenix and The Real Paper, while Silver’s time at The Village Voice and on planet Earth motivates the anthropological acuity with which the newspapermen’s arrogance and complexes are rendered. In a famous scene, photographer Abbie (Crouse) hits it off with an exotic dancer (Marilu Henner, in her first screen role), irritating journalist Harry Lucas (Heard), who came to the interview with canned, sexist questions. Naturally, Harry and Abbie soon become an item, and Silver charts their relationship with enough peaks and valleys to present it in unidealized terms. The same goes for the relationship between the self-effacing Laura (Welles) and Michael (Stephen Collins), a lapsed reporter with a book contract. Michael’s off-the-charts narcissism drives Laura, briefly, to Harry, yet Michael’s reaction to this turn is surprisingly subdued. As bad as the men are, Silver never overplays her hand by turning one into The Godfather’s Carlo, to pick an infamous 1970s example. It’s just that the women in the newsroom lead when the men fold; office manager Lynn (Eikenberry) embodies this ethic in a crucial, late-act confrontation with the new management.

If Between the Lines epitomizes the J.M.S. sensibility, it balances a behavioral realism, as captured through subtly modulated performance, with a knowing, aesthetic theatricality. Silver loved filming quiet character moments against a sequence of impassioned musical performance, as seen in the extended Southside Johnny & the Asbury Jukes party scene here, or the beautiful “Some Enchanted Evening” number, set in a Papaya King, from Crossing Delancey. But other scenes in the film, such as the first and last, also find ways to foreground the artificiality of performance without diegetic music. Michael J. Pollard, the baby-faced actor from Bonnie & Clyde, opens Between the Lines hawking the Mainline to commuters, and in one shot he looks directly into the camera lens, an inviting intermediary between audience and story world. The film closes with a satisfying punchline, where Max convinces a bar regular (played by National Lampoon’s now-mythic co-founder Douglas Kenney) to pay for his drink after grokking him a Mainline reader. The credits roll as they hit it off, and a zoom out reveals their shadows cast starkly against a back wall by an off-screen key light. In part the consequences of a low budget, these imperfections peel back the curtain just enough, loving moments uncontained.